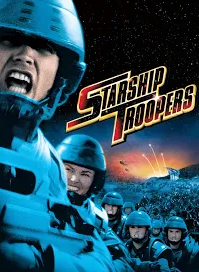 This time, we review the fascistic satire war film Starship Troopers and along the way we wonder if it’s right to poach 18-year-olds for your military, is it really a Paul Verhoeven movie if there’s no nudity, and how did this movie spawn an entire direct-to-video franchise? Let’s dive in…

Directed by Paul Verhoeven: As Chris remarks during the episode, this may have been the point of Verhoeven’s career where he was fully actualized having directed Robocop (which we’ve previously covered with special guest Brian McLeod), Basic Instinct, Total Recall and Show Girls. While his career hasn’t enjoyed the same popularity in recent years, he became known for hyper stylized violence, subversive yet relevant content and of course, nudity.

Written by Edward Neumeier: He had previously collaborated with Verhoeven on Robocop

Casper Van Dien as Johnny Rico: Van Dien had developed quite a reputation working on television prior to being cast in this film having appeared on shows like Dr. Quinn: Medicine Woman, Beverly Hills 90210, and Married with Children

Denise Richards as Carmen Ibanez: This is considered by many to be Richards’ breakthrough role as she starred in Drop Dead Gorgeous, The World is Not Enough and Wild Things after starring in Starship Troopers

Dina Meyer as Dizzy Flores: Meyer was also cast following a run on Beverly Hills 90210 as well as a memorable run on FRIENDS as a romantic partner of Joey

Neil Patrick Harris as Carl: Harris was slowly working on rebranding himself as a serious actor after he was primarily known as a child star on the show Doogie Howser, M.D.

Jake Busey as Ace: The son of legendarily crazy person Gary Busey, Jake has become more a bit actor, but is willing to accept roles with little prestige especially in recent years as he appeared in the third season of Stranger Things and several episodes of Agents of S.H.I.E.L.D.

Earth in the Future

While it’s not explicitly mentioned when this film takes place, it’s set sometime in the 23rd century when interstellar travel is now possible and militaries are more advanced than ever before. The government is also controlled by a group of veterans or military officers having overthrown a prior regime that was run by intellectuals and bureaucrats. This is the briefest of world building we receive in the course of the film which seems odd given Verhoeven’s attention to detail in films like Robocop and Total Recall.

In this world, citizenship is not guaranteed and can only be obtained through a term of military service, but while citizenship is guaranteed, safety is not. Throughout the first act of the film, we see veterans who have given part of themselves in service of their society.

Rico’s teacher, Rasczak, is missing his arm but is given a prosthetic when he joins up again. Even the recruiting officer is missing an arm and both legs. While Rico is initially shocked to see this, it doesn’t deter him from joining and he’s naïve to think that something like that won’t happen to him until he arrives at the initial invasion.

Naivety is common among the recruits in Rico’s class as they all have their reasons for joining including getting money for school, career military aspirations, reproductive rights, political careers, and in Rico’s case, a woman. Although prior to Rico enlisting, he’s easily led by Rasczak into joining and by letting him think it’s his own decision to join and risk his life.

These opportunities are not available to individuals who do not enlist and even the simple act of creating a life is prohibited to them unless they join and serve.

In interviews after Starship Troopers was released, director Paul Verhoeven has stated numerous times that this film is mean to be viewed as a satire of a fully realized fascist society. Having grown up in Nazi occupied Europe during World War II, he is uniquely qualified to speak on such matters and in this case, to subvert it.

Verhoeven manages to hit the nail on the head when taking on this satire by showcasing a fully developed military, but no other major scientific developments unless they are in service to furthering a military’s agenda. We also see that the army is primarily filled with young people with some exceptions given to senior leadership.

Their motivations are also unclear as to why humanity is attacking the Bugs. There is a vague reason of the Bug’s being able to send targeted asteroids across billions of miles of vast, empty space towards Earth to destroy cities, but after witnessing them in battle, this seems implausible.

As dark as it can be at times, Starship Troopers is meant to be viewed as a propaganda film and even the opening prologue of the film is a shot-for-shot remake of a scene from an infamous Nazi film, Triumph of the Will. The link between Nazism and propaganda films is complicated.

The short version is that prior to World War II, the largest cinema audience outside of the United States was Germany. In an effort to make sure Hollywood didn’t alienate the world’s second largest audience, they made films that accidentally became beloved by the Nazis. The Nazis then used these films for their propaganda and to propagate their hateful rhetoric.

Comedy legend Mel Brooks has a brilliant quote on using satire to combat rhetoric, “Rhetoric does not get you anywhere, because Hitler and Mussolini are just as good at rhetoric. But if you can bring these people down with comedy, they stand no chance.”

At the time, this film had a decent budget ($105 million); yet, it was not a success at the box office having only grossed just over $121 million. While the reviews at the time were favorable, it was not enough to save the film or give it a boost financial wise.

It did manage to spawn 4 additional sequels, but these have not been well-received and have all been released via direct-to-video with the most recent one in 2017 starring Casper Van Dien. It also inspired a CGI television show in the early 2000’s, but was cancelled after 8 episodes and the series ended on a cliffhanger.

Several video game adaptations have also been released, but these have also been critically panned. In 2011, plans were announced to release a remake of the original film, but as of 2016, there have been no updates on this project and it is unlikely to happen.

On our unique scale for the Force Fed Sci-Fi Podcast, our hosts differed slightly in their rating for Starship Troopers with Sean calling the film a WOULD OWN and Chris calling it a WOULD HOST A VIEWING PARTY. Sean cited the dated visual effects and the fact that it shouldn’t take years for people to figure out the true nature of a film. Chris cited the satire as his primary reason and the battle scenes being entertaining.

What did you think of Starship Troopers? Is the representation of female characters bothersome? How do you explain Rico’s meteoric rise through the ranks? Leave your thoughts and comments below!

Also, listen to the full episode to hear our hosts answer these questions as well as their choices for Lens Flares and Red Shirts and tune in next time when they review the Danny Boyle film from 2007, Sunshine!