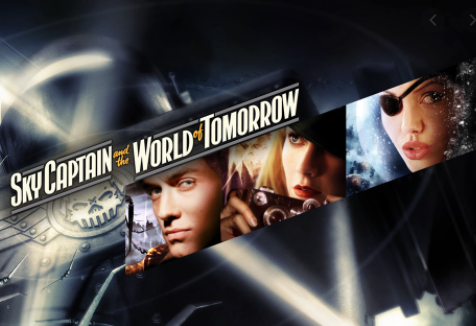 This time, we look at a modern cult classic with our Sky Captain and the World of Tomorrow film review and along the way ask, why is Angelina Jolie so prominent in the film’s marketing? How influential was the “digital backlot?” And, was resurrecting Laurence Olivier a smart move? Let’s dive in…

Sky Captain and the World of Tomorrow Cast and Crew

The Rise of the Digital Backlot

If you’ve watched Sky Captain and the World of Tomorrow, you probably noticed the film has an odd color palate and design. This is due to Conran utilizing what became known as a “digital backlot.” Conran is a fan of cinema of the 1930’s and 40’s as well as animation techniques. Following his apprenticeship in a Disney animator program, he thought many of the techniques he learned could be applied to a live-action film, but upon realizing that many studios would not be willing to take a chance on a first-time director with a brand new concept of filming, he decided to make the film himself.

He spent many years in the 90’s working on a Macintosh computer and even produced a crude teaser trailer with homemade bluescreens. This trailer was then shown to a friend of Conran who in turn showed it to an additional friend and agreed to produce the film. This producer and Conran would spend the next ten years working together in an attempt to get their film onto the big screen. Prior to shooting with a full cast, Conran shot the film himself and then created moving storyboards in order for his actors to understand how scenes would unfold and how to move during these scenes.

In an effort to save costs, Sky Captain and the World of Tomorrow was shot in a total of 26 days utilizing entirely blue or green screens and incredibly minimal set design. The short production time allowed for the crew to work on the complex visual effects which mostly included overlaying the live action footage with the previously rendered animation from Conran’s prior shoot without his principal actors. Conran noted he would end up working 18 – 20 hour days in order to help create the 2,000+ visual effects shots seen in the film.

In addition to this new style of filming, Conran also wanted to digitally resurrect a deceased actor for the role of Dr. Totenkopf, Laurence Olivier. This was a challenge due to the fact that Olivier had been dead for 13 years at the time of filming and the fact that this had never been attempted before in a major motion picture. Conran and his team mostly used footage and audio from Olivier’s younger days and this technology and performance would later be used in films like Superman Returns and later in Rogue One: A Star Wars Story.

A New Raiders of the Lost Ark

One of the main criticisms Sean and Chris noted on our podcast episode was that Sky Captain’s overall similarity to Raiders of the Lost Ark. This seems to be intentional on the part of the filmmakers given the film is modeled after the action serials of the 1930’s and how Sky Captain is eerily similar to Indiana Jones. There’s also a diminished role of women with Polly Perkins and The Mysterious Woman, the latter of which we later find out is a robot designed by Totenkopf and robbing her of any sort of autonomy she may have had. Polly Perkins is also not a major help during the film as she’s continuously on a quest to find a perfect photo during this adventure only to have it thwarted at the end of the film because she had the cap covering the lens of her camera.

Sky Captain and the World of Tomorrow also features a sort of alternate history of the buildup to World War II. Nazis aren’t explicitly mentioned neither is Hitler’s Third Reich, but we see a technological leap forward as the film opens with a zeppelin docking at the Empire State Building and huge robots wreaking havoc all over the world until ‘Sky Captain’ swoops in and saves the day. Raiders followed a similar plot pattern as Dr. Jones sought to stop the Nazis obtaining the Ark of the Covenant. The Nazis were actually seeking out these ancient artifacts in the hopes of giving them an edge in battle as well as legitimizing Hitler’s outrageous claims. The destructive machines of Totenkopf are similar to several prototype weapon designs created by the Nazis, but ultimately did not go into production.

The Legacy of Sky Captain and the World of Tomorrow

In spite of the massive marketing campaign and hype leading up to the release, Sky Captain and the World of Tomorrow was not a major success. The film’s massive budget ($70 million) and lack of understanding in regards to the plot contributed to the financial failure as it only managed to gross $58 million. It was well received by critics at
the time and the film still holds a 70% rating on Rotten Tomatoes. Roger Ebert gave the film 4 stars and Entertainment Weekly gave it an “A-“ in their review. Kerry Conran has disputed the budget many times in subsequent interviews remarking that the film would not have cost as much to make if he were given permission to cast lesser known actors.

Sky Captain has come to be known as a pioneer in the “digital backlot” type of filmmaking as it led to films like Sin City, 300, Speed Racer, The Spirit and Avatar. It’s impact is far-reaching among film genres, but it’s often forgotten as the pioneer of utilizing the digital backlot.

On our unique scale for Force Fed Sci-Fi, both Sean and Chris rated Sky Captain and the World of Tomorrow as WOULD NOT WATCH citing the film’s convoluted plot, poor chemistry between Jude Law and Gwyneth Paltrow, bad writing, and dated visual effects as the main reasons for the rating.

What did you think of Sky Captain? Did you make sense of the plot? Do you think Jude Law could’ve made a decent James Bond instead of Daniel Craig? Listen to the full episode to find our thoughts on these questions as well as our choices for Lens Flares, Red Shirts and the newest entry in This Week in Toxic Fandom. Please listen, rate and
subscribe to the show in your favorite podcast player and please leave us a five star review. Tune in next time as Sean and Chris will dissect the 1997 satire film Starship Troopers!