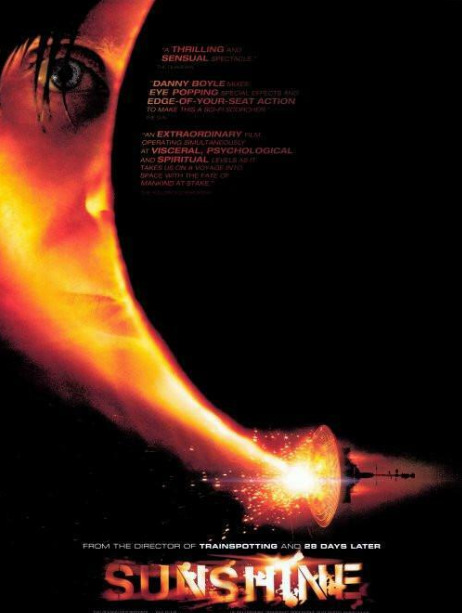 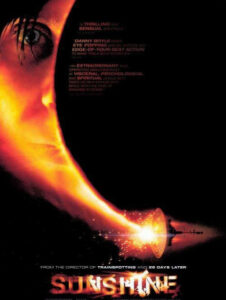 This time, we’re taking a look at the space travel/horror film, Sunshine, and along the way
we find out if the cast and crew of the Icarus 2 has the “right stuff,” we’ll look at how a
sudden turn can totally derail a film, and is a remake of this film possible? Let’s dive into
our Sunshine movie review and commentary…

Directed by Danny Boyle: After gaining international prominence following his
directorial efforts in Trainspotting and 28 Days Later, Boyle decided to wade into
the science fiction genre and was tagged to direct Sunshine. He would later
direct the award winning films Slumdog Millionaire and 127 Hours.

Written by Alex Garland: Garland and Boyle had previously teamed up
together to make 28 Days Later and was asked to collaborate again for
the making Sunshine.

Cillian Murphy as Robert Capa: He had also worked with Boyle after
starring in 28 Days Later, but had gained prominence after appearing in Batman
Begins.

Chris Evans as James Mace: Before being cast as Captain America in the
Marvel Cinematic Universe, he had previously starred in the Fantastic
Four films as well as the parody film Not Another Teen Movie

Rose Byrne as Cassie: After appearing in the epic film Troy, she was
handpicked by Boyle to appear in this film

Rose Byrne provided the voice of Mother in Netflix’s I Am Mother, check out our review

Michelle Yeoh as Corazon: Following appearances in Tomorrow Never
Dies, Crouching Tiger Hidden Dragon and Memoirs of a Geisha, Boyle
gave her carte blanche to pick whatever role she wanted even saying a
character could and would be rewritten to fit her gender.

“The Right Stuff” for Sunshine

As Chris and Sean outline in the podcast episode, Boyle had the actors go through an
extensive to-do list in order to prepare for their roles. This list included:

As this list was meant to prepare non-astronauts for a space, real NASA astronauts go
through an extensive training program which includes:

One of the holes pointed out in our podcast is that on a typical space mission, the
astronauts are cross trained to perform one another’s tasks in case something
catastrophic were to happen with one of the other crewmates.

This is an aspect not typically discussed in other space movies. When one crew member
is incapacitated or killed, it doesn’t immediately sink the mission, but rather those duties
of that crew member are then dispersed among the remaining crew. Astronaut crews
are millions of miles away from Earth and any sort of aid so they are on their own and
must be able to function smoothly with any type of unexpected incident.

Roughly halfway through the film’s second act, the crew of the Icarus 2 discovers the
derelict spacecraft of the Icarus 1 crew. They go aboard to search for supplies hopefully to
maybe find out why the crew went missing and their mission failed.

Sometime during this excursion, the former captain of the Icarus 1, Pinbacker,
sneaks aboard the Icarus 2 and begins to sabotage the mission and kill the remaining
crewmembers. His initial action directly leads to the deaths of 2 crewmembers. During
his sneaking around, he kills Corazon and it’s implied he killed Troy; although, this is
not confirmed during the final act.

This intrusion derails the trajectory of the entire film. Up until this point, it had been a
thrilling space travel adventure with the perils of the mission emphasized every time the
crew has to go on a repair mission or fix some problem onboard their craft.

During the final act, Pinbacker is on his murderous rampage. He is shown with
different lens techniques that leave him out of focus and obscures just how sun damaged
he truly is. He stalks around the Icarus 2, looking like a low rent Freddy Kruger, spouting
religious quotes and wants to destroy the ship and the world as he believes it is God’s will.

At the time of its release, Sunshine was a critical success having gained a 76% rating
on Rotten Tomatoes as well as a rating of 64 on Metacritic. However, the film was not a
commercial success.

Against a sizeable budget of $40 million, it only grossed $32 million. It opened the same
weekend as the films Hairspray and I Now Pronounce You Chuck and Larry.

The film has also been noted for its lack of scientific accuracy, specifically the lack of
artificial gravity aboard the Icarus 2. In addition, the nature of the stellar bomb used
to “restart” the Sun in addition to the premise of the Sun “dying” and requiring a “restart.”

Given that enough time has passed to identify what specifically is wrong with the film,
Sean and Chris pondered if a remake could be possible. The film was largely overlooked
during its time, but with a major cast, some retooling of the original story, and
maintaining the great level of visual effects and production design, a remake may be in
the cards. However, we don’t work in Hollywood so if any producer or screenwriter is
reading this, give us a producer credit.

On our unique scale for our podcast both Sean and Chris were in agreement in their rating
by calling Sunshine a WOULD WATCH citing that the film does start off well, isn’t
unwatchable for the majority of it, and is bolstered by decent characters.

However, this is quickly forgotten thanks to baffling plot holes and a sudden turn towards
the horror genre and forcing Pinbacker to play the villain.

Leave your thoughts below and listen to our full episode for more on your favorite podcast
player and please leave us a 5 star review. Tune in next time when we review the overlooked
classic from 1976, Logan’s Run!