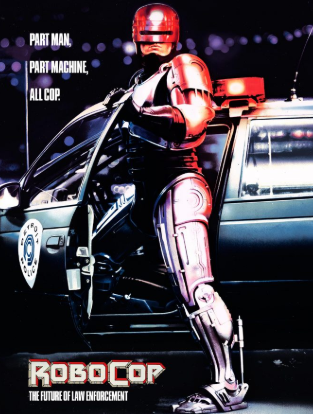 This time, Force Fed Sci-Fi welcomes its first guest, Brian McLeod, to take a look at Robocop! During our review, we discuss how the character of Robocop himself actually accomplishes little to no police work, could technology offer a solution to areas infested with crime, and is Robocop worthy to get a statue in Detroit? Let’s dig in…..

Directed by Paul Verhoeven: Born in the Netherlands, Verhoeven had a solid reputation as a filmmaker prior to taking on Robocop. His early collaborations with Rutger Hauer earned him worldwide fame and even earned an Academy Award nomination for Foreign Language Film in 1974. Robocop was Verhoeven’s first major Hollywood film and was able to blend many complex themes together to create an entertaining and memorable story.

Starring Peter Weller as Alex Murphy/Robocop: Prior to his casting, Weller was relatively unknown, but starred in the cult hit The Adventures of Buckaroo Banzai Across the Eighth Dimension in 1984. He was not the first choice for Murphy as Rutger Hauer and Michael Ironside were considered, but their large frames would not fit into the Robocop costume. Weller has since gone to have a respectable career appearing in films and television and has earned his Master’s Degree in Roman and Renaissance Art as well as a PhD in Italian Renaissance Art History.

Nancy Allen as Anne Lewis: While she does not have a ton of memorable credits to her name, she remained a consistent presence in the Robocop films and would go on to appear in this film’s sequel as well as the third film even after Peter Weller left the franchise. It’s unclear exactly of her feelings towards Murphy whether it’s professional or romantic, but she offers a unique morality to the film as no one comes out smelling like roses at the end.

Kurtwood Smith as Clarence Boddicker: Before he was known as Red Forman on That 70’s Show, Smith turned in a rather convincing performance as this drug kingpin. Boddicker clearly has a bevy of mental issues including narcissism and megalomania and has a near total disregard for human life. Everyone around him is either a means to an end or they’re just a target. The filmmakers have commented that making Boddicker an intellectual was intentional even down to the rimless glasses he wore as it made Smith look like infamous Nazi officer Heinrich Himmler

Is Robocop a Good Cop?

Any police officer will tell you that most of what is seen on television and film is dramatized. Most of the job is filling out paperwork as every stop and movement must be documented and cataloged. Robocop seems to not be familiar with these procedures.

First, he just leaves his precinct without informing the Desk Sergeant where he’s going or what area he plans to patrol. Second, he engages in both breaking up a convenience store lobby and an attempted sexual assault without returning to the precinct to fill out any sort of paperwork or arrest log. In addition, we don’t even see him arrest anybody! One of our show’s hosts, Chris, is pretty sure that the convenience store robber was also just left dead in the freezer as Robocop drops a cool one-liner and exits the store.

Finally, Robocop has a clear disregard for due process. After he interrogates one of Boddicker’s henchman, he breaks into a warehouse without obtaining a warrant and begins shooting up the joint. Not only would any normal cop be removed from patrol duty after a shooting, they would be assigned to attend some type of counseling to gauge how they feel after potentially taking a life. However, since Robocop isn’t technically human, he has no need for this type of post shooting procedure.

You might be surprised to learn that the original Robocop script was actually written with the violence in mind as the producers went through several choices for the director’s chair before choosing Verhoeven. Several prospective choices wanted to tone down the violence and even Verhoeven was reluctant to take on the project as his wife was the one who ultimately convinced him to take on the challenge.

As previously mentioned, Peter Weller wasn’t the first choice for Alex Murphy, but he was able to convey a unique pathos to Robocop that other options were not able to bring to the screen. Weller does a great job as Robocop and it’s easy to see his dedication to his role. He even worked with a movement coach from Julliard to develop the movements and walk for Robocop.

The suit itself, which was designed by legendary effects artist Rob Bottin, was the most expensive item in the film as $1 million of the film’s $13 million budget was devoted to making the suit and took almost a year to build! Weller had to request that fans be built into the set as it was later reported that he was losing three pounds a day while wearing the heavy suit all day on set. It’s easily the best looking part of the film and the effects blend seamlessly into the film and seem advanced for the time.

If you’ve seen Robocop, you know that the film does not shy away from portraying graphic violence. So much so, that the original cut of the film received the “X” rating from the Motion Picture Association of America and had to be recut 11 times before the film was considered acceptable to receive the “R” rating. This led to Verhoeven inserting the humorous commercials as a way of distracting audiences from the more violent aspects of the film. However, Murphy being slaughtered by Boddicker will be seared into the minds of most viewers. The “X” rated version of the film was not made available until a new edition was released for home media in November 2019.

Is Detroit Really that Terrible?

Admittedly, our show’s hosts have not been to Detroit, but it’s no secret that the city has seen better days. It’s hard to imagine any city having this amount of crime at any point in its history. On a side note, the film itself wasn’t even filmed in Detroit as the majority of production took place in Dallas, TX. Some notable Dallas landmarks are even visible during the film.

It’s unclear when exactly Robocop takes place, but a safe assumption might be sometime in the late 90’s. The level of robotics seen in the film weren’t available in the 80’s and while science has made great leaps in the years since, we aren’t anywhere close to the level of sophistication seen in Robocop.

With that being said, one of the questions our hosts brought up is could crime ever get this bad to necessitate the need for a Robocop? The short answer is no. Crime today is not nearly as high as it was in the 70’s and 80’s and while certain cities like Chicago seem to be plagued with gun violence, having a Robocop on the streets could just turn it into a target for criminals to destroy. The solution could lie with current technology such as gunshot detection systems, body cameras, and research / collaboration into more progressive investigation techniques. If you’re familiar with the HBO show The Wire, then you’ll know that unique problems and criminals require unique techniques to bring them to justice. Having a Robocop wouldn’t be a cure-all for crime in any city. Maybe street crime, but there’s also drugs, prostitution and corruption that a Robocop wouldn’t be equipped to handle.

The impact of Robocop was felt almost immediately as it spawned a massive franchise with two additional sequels as well as a reboot in 2014 and another entry in the series that’s been stuck in developmental hell for some time. Neil Blomkamp (director of Elysium and District 9) was attached to direct the new film at one point, but left the project in August 2019. There’s even been two animated series as well as many comic book adaptations/crossovers.

The film itself has been consistently rated as one of the best action films of all-time. In one of the more stranger promotional acts for the series, Peter Weller appeared in full Robocop costume in a WCW pay per view event where his sole job was to appear in the arena and free the wrestler Sting in order to fight a different group of wrestlers. As the character of Robocop was popular with children, the decision to add him to a wrestling appearance made sense to the promoters. In hindsight, this seems more ridiculous than anything else, but this wasn’t the only strange move that involved the famed robot cop.

In 2014, plans were announced to unveil a statue of Robocop in Detroit, but the project seemed to be going nowhere with the sculptor backing out of the project for financial reasons. Plans are still on-track to make and unveil the statue, but with no sculptor announced and only a planned location for said statue, it’s unlikely that statue will be seen anytime soon.

While the first film was the major financial success ($53.4 million on a $13 million budget), the rest of the series did not rise to the same levels. Given the recent attempts of rebooting sci-fi franchises like The Terminator with Terminator: Dark Fate and Men in Black with Men In Black: International, Robocop could potentially find itself on the trash heap while waiting for a new reboot.

Robocop was given a “Would Own” rating on our rating scale by our hosts Chris and Sean as well as our guest on the show, Brian McLeod. While there are some storylines that aren’t fully addressed at the end and for some the violence may be off-putting, Robocop gives its audience a unique look at themes such as chaos and corruption mixed with the sci-fi element of humanity amidst robotics.

So what do think of the 1987 film of Robocop? Are you turned away from the violent nature it portrays? Do you think a human mind will be able to be attached to robotic parts in the future? Leave your thoughts and comments below! And don’t forget to subscribe to our podcast show and leave us a rating on your favorite podcast app / platform!