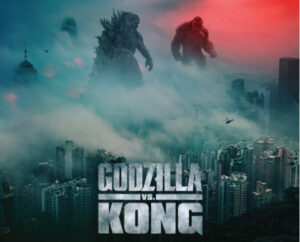 This time, we’re taking a bite sized look at the Monster Verse’s latest offering in Godzilla vs Kong and along the way we ask what was the point of Mecha Godzilla, why is Hollow Earth now so important to the plot and where does the Monster Verse go from here? Let’s dive in….

• Directed by Adam Wingard: He had previously horror films such as You’re Next, Blair Witch and the Netflix adaptation of Death Note. He was announced as the director of this film in 2017 prior to the release of Godzila: King of the Monsters. While the director of that film, Michael Dougherty, did not direct this film, he did help to develop the story and even receives a credit for his work.
• Starring Alexander Skarsgard as Dr. Nathan Lind: The eldest son of legendary actor Stellan Skarsgard, Alexander has managed to find himself in compelling yet entertaining films for the past decade beginning with Battleship and The Legend of Tarzan as well as shows like True Blood and The Stand
o Rebecca Hall as Dr. Ilene Andrews: She rose to prominence following appearances in films like The Prestige, The Town and Iron Man 3 and really helps to round out the cast
o Brian Tyree Henry as Bernie Hayes: Henry is approaching superstar status as he has appeared in films like Child’s Play, Widows, Spider-Man: Into the Spider-Verse and Joker. He is set to star in the MCU’s latest ensemble film The Eternals as he’s slated to portray the first gay superhero in that film series
• Also Starring:
o Shun Oguri as Ren Serizawa
o Eiza Gonzalez as Maia Simmons
o Julian Dennison as Josh Valentine
o Lance Reddick as Guillerman (Most of his scenes ultimately ended up on the cutting room floor)
o Demian Bichir as Walter Simmons
• Reprising their roles from King of the Monsters
o Kyle Chandler as Dr. Mark Russell
o Millie Bobby Brown as Madison Russell
o Zhang Ziyi was also set to reprise her role but her role was cut out of the film during editing

The Creation of the Monster Verse

It seems that creating film universes is the newest trend and while it’s not advised to come at the Marvel Cinematic Universe, the Monster Verse has done a good job of holding their own in terms of the critical reception and box office returns. The Monster Verse wasn’t originally envisioned to become the franchise it eventually became, the reboot of Godzilla directed by Gareth Edwards in 2014 was released to major box office numbers as well as some of the most positive reception for a film that year.

During that same year, Legendary Pictures had announced they had acquired the rights to the Mothra, Rodan and King Ghidorah characters as well as the film rights to King Kong. Following the success of Godzilla and the acquisitions of its adversaries, it seemed inevitable that we would eventually see the two Titans clash on screen. Kong did receive a sort of reboot for that franchise in 2017 as Kong: Skull Island was released to similar fanfare that accompanied Godzilla.

Godzilla vs Kong was originally announced in October 2015 for a 2020 release which gave Legendary Pictures plenty of time to build their universe with the only other release being Godzilla: King of the Monsters during that time. Legendary also released Pacific Rim: Uprising but this film is not considered to be part of the Monster Verse. In addition to these films, an anime series was announced in January 2021 that would be set on Skull Island and tell stories of shipwrecked characters during their time on the island.

The Existence of Hollow Earth 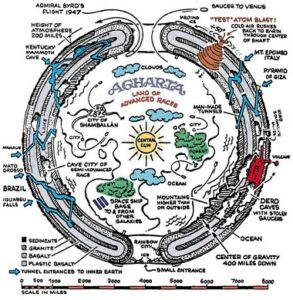 While briefly mentioned during previous films in the Monster Verse, Hollow Earth plays a much more prominent role in Godzilla vs Kong as we see that it’s how Godzilla was able to navigate the globe quickly and explain the odd climate and creatures that live on Skull Island. The idea of Hollow Earth comes from the year 1692 as Edmond Halley theorized that the Earth is entirely hollow or contains a large space and if the name Halley sounds familiar, it’s because he Britain’s chief astronomer during his life and even has a comet named after him.

We now know the Hollow Earth theory to be little more than pseudoscience thanks to the work of two separate scientists, Pierr Bouguer and Charles in Hutton during the 18th Century, Hollow Earth actually has roots in ancient folklore.

Almost every ancient society like the Greeks or the Celts contain some reference to the Earth being hollow or containing some type of world that is inaccessible to normal humans. The concept of Hollow Earth has now mostly been relegated to fiction thanks in large part to Jules Verne’s classic novel Journey to the Center of the Earth.

Thanks to the work of geologists and other scientists we now have some certainty to the contents of the Earth as it is made up of tectonic plates that occasionally move as well as the mantle, outer core and inner core.

Trajectory of the Monster Verse

As previously speculated Godzilla vs Kong was meant to be the culmination of the Monster Verse and following its success, it is unclear where the film series will go from this point. In recent weeks, it was announced that Adam Wingard would return to direct a future installment in the series but it is unknown what that installment would be titled or any plot details.

It’s possible that his new film could be titled Son of Kong but at this point, that remains purely speculative. The previously mentioned anime adaptation of the adventures on Skull Island will be released at some point but it is unknown as to when that will be available for viewing.

Also unknown if the actors from King of the Monsters and Godzilla vs Kong would return for future installments but it would be nice if the series actually made these actors more prominent in sequels as opposed to killing them off or limiting their roles.

On our unique scale for the podcast, hosts Sean and Chris were divided on their opinions for Godzilla vs Kong with Chris calling the film a WOULD WATCH and Sean calling it a WOULD OWN. Sean attributed his rating to his general love of the Monster Verse franchise as well as previous kaiju films and enjoying the film’s spectacle.

While Chris declared the film to be all style but no substance with the inclusion of Mecha Godzilla feeling more like a “jump the shark” moment as opposed to a great action moment in the franchise.

We’ll be back to regularly scheduled programming soon as we’ll release our review on Mars Attacks soon. As always, please check out our social media pages and leave us a review in your favorite podcast player of choice!