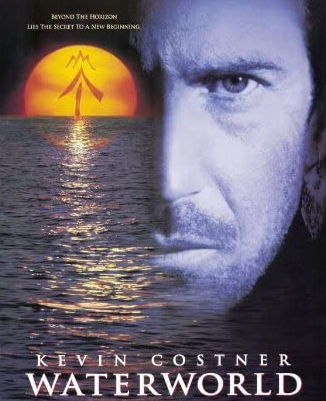 This time, we go over our Waterworld Movie Review, a massively overbudgeted epic of a film. Along the way we ask, how shameless is this film a rip-off of Mad Max, is this a pro-environmental film, and is Dennis Hooper a convincing villain? Let’s dive in…

Directed by Kevin Reynolds: Reynolds has establish a solid working relationship with Kevin Costner after directing films like Fandango, Robin Hood: Prince of Thieves, and Rapa Nui that all featured Costner. Therefore, it seemed natural for Reynolds to direct this Costner-led sci-fi adventure film.

Kevin Costner as the Mariner: In the mid-90’s, Costner was Hollywood’s leading man starring Bull Durham, Field of Dreams, Dances with Wolves, JFK, and The Bodyguard. Think how popular Dwayne Johnson or Tom Cruise is now and you have an idea of how much of a box office draw Costner was during the late 80’s into the 90’s.

Dennis Hopper as The Deacon: While the legendary actor has had a stellar career, his star had faded as the 80’s rolled into the 90’s and really began when he accepted a role in the now infamous adaptation of Super Mario Bros. He returned to prominence again after his villainous performance in Speed, but never returned to the renown he enjoyed during the 60’s and 70’s.

Jeanne Triplehorn as Helen: She was just beginning her career as she starred in films such as Basic Instinct and The Firm. Since then, she’s been a mainstay on television after long runs on the shows Big Love and Criminal Minds.

Tina Majorino as Enola: If the name doesn’t sound familiar, viewers may remember her the young clothing and hair accessory vendor in the cult classic Napolean Dynamite. She has also appeared in television shows such as Veronica Mars, True Blood, and Big Love.

Initially, Waterworld was already approved for a budget of $100 million. Now that was in the early 90’s, and was a massive budget. Adjusted for inflation, that would be equivalent to $174 million today and this had the makings of a success for any studio. It had a decent science fiction premise and Hollywood’s most prominent actor at the time, but the budget slowly began to creep up.

Many aspects of the film would be just as troubled. The film’s original composer, Mark Isham, was fired after completing about a quarter of the music and was replaced by James Newton Howard. Costner remarked that Isham’s firing was due to his core sounding “too bleak and ethnic” for the tone of the film.

In addition, Kevin Reynolds left the production citing frequent clashes with Kevin Costner. Prior to the film, Costner had won an Oscar for directing Dances With Wolves and maybe thought his input would be welcome given his past success. However, according to Reynolds, Costner became a “backseat director” and forced Reynolds to leave the film entirely. The relationship was strained so much that the two would not work together until Costner was cast in the miniseries Hatfields & McCoys.

It Could Happen … Sort Of

The premise of Waterworld is that Earth has become completed submerged following the melting of the polar ice caps and has forced the remaining humans to live on the water. This premise isn’t entirely from fiction, as there has been recent geological findings that had led researchers to theorize that Earth was entirely covered in water roughly 3 billion years ago.

However, with the current trends in climate change data and monitoring of the polar ice caps, there is data to support that ocean levels are rising, but they will not rise to the levels seen in the film. Even if the ice caps were to melt, ocean levels would rise about 200 feed and would submerge many areas of the world.

At the heart of the bleak future portrayed in Waterwold, there is actually a pro-environmental message. It’s implied throughout the film that humanity caused the ice caps to melt, but it’s never explicitly stated. The film does take place in the year 2500; so, it’s safe to assume that some things are lost to history and humanity’s role in its demise is now the stuff of legend. But, in the film, we see the Mariner subsisting on a diet mainly on fruits and vegetables and is very protective of the plants in his care. This is taken from history as sailors in the 18th and 19th centuries would carry stores of fruits for consumption in order to avoid diseases like scurvy.

The main villain, The Deacon, has made his lair on an old oil tanker which we later learn is the infamous Exxon Valdez, which was responsible for a massive oil spill in 1989. The Deacon repeatedly makes references to “redeeming” the legacy of the ship and its captain, Joseph Hazelwood, who was ultimately blamed for the disaster on the grounds of drunkenness and incompetence. even the connotation of the term “Smokers” is negative as the world was beginning to understand the effects of smoking as well as the effects of secondhand smoke.

Waterworld asks its viewers to accept a lot of information that doesn’t make sense. For starters, even though the film is set 500 years in the future, we are expected to believe that there would be scores of working vehicles such as boats, jet skis, oil tankers and even planes, let alone that there would still be people who would be be able to learn how to pilot them.

There is also a wide array of weapons that are still able to shoot projectiles rather than rust to pieces decades ago.

There is also the issue of the Mariner being able to adapt to an ocean existence mere centuries after the ice caps melt. These adaptations come in the form of gills and webbed feet, which label him as a “Mute-O” to the humans he encounters at the Atoll.

These type of adaptations develop over hundreds of thousands of years and wouldn’t appear in humanity for a long time before we’re shown in Waterworld.

Is This a Cult Classic?

As mentioned earlier, Waterworld was weighed down by a massive production and marketing budget and made it impossible for the film to make money at the box office. When it was all said and done, the film only grossed $264 million. It still finished as the ninth highest grossing film of 1995, but a film of Waterworld’s budget needs to gross in the neighborhood of $400 million for it to break even and earn a profit. However, in the quarter century since its release, the film has enjoyed an odd post-release success.

Waterworld eventually became profitable thanks to home media sales and selling the television rights. The film also received several video game adaptations which were not received well since when does any video game movie tie-in ever do well? However, the film’s novelization, written by Max Allan Collins, was successful and managed to expand the world the film is set.

In addition to the novelization, a limited comic book series was released that revealed more of the Mariner’s backstory. It’s also become a popular stunt show attraction at Universal Studios at its locations in Hollywood, Japan and Singapore. A 20 minute YouTube video can be viewed that details a showing from the Hollywood location.

As Sean and Chris discuss in the podcast episode, there have also been rumors of a longer cut than what is currently available for viewing. The film’s run time is about 2 hours and 15 minutes, but there is supposedly a three hour cut version that would provide clarity to some of the character’s motivations and actions. However, given that no one is really asking for this like they are for Zac Snyder’s cut of Justice League, it’s unlikely viewers will be “treated” to a three hour cut of one of the most infamous films of all time and it’s equally unlikely that we’ll ever see a sequel. Imagine our relief…

On our unique scale for the podcast, our hosts were in agreement yet again and called Waterworld a WOULD NOT WATCH. Sean cited the film’s runtime, awkward pacing and incomplete characterization as his reasons for his rating. Chris cited the blatant rip-off of the Mad Max franchise as his primary reason for his rating. Both agreed that the film is more known for its tumultuous production rather than the film itself as the main attractor for people to view it. While the film is slightly more watchable than Kevin Costner’s later attempt in sci-fi, The Postman, it’s not much better.