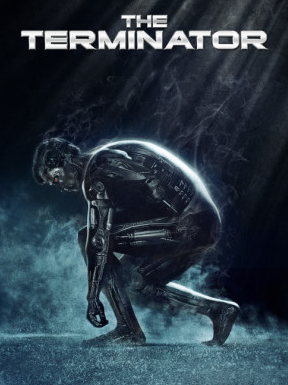 This week, we take look at the classic and franchise-setting film, The Terminator! We’ll be discussing The Terminator movie cast, The Terminator special effects, the Nike shoes product placement in the film, our own The Terminator film review and rating, and more! So take a seat, listen to our podcast episode and/or read and learn about this legendary movie (and if you leave, you’ll be terminated…jk).

The Terminator Movie Cast and Director

We’ve briefly discussed James Cameron here at Force Fed Sci-Fi before when we discussed and reviewed Strange Days, which Cameron wrote. However, The Terminator was his directorial debut. And for his directorial debut, Cameron was beyond successful. Of course, we’ll talk about the legacy a bit later, but we all know this first film spawned a globally known franchise.

It may be safe to say that this movie helped Schwarzeneggar reach global fame while his previous film Conan the Barbarian was more of a break-through role. It’s interesting to think as to why his terminator role raised his stardom. While it did help that this film was praised for its special effects, why did a part with little emotion and only 17 to 18 lines make Arnold famous?

Prior to selecting Schwarzeneggar as the title role, Mel Gibson and Sylvester Stallone were in line to receive the part. In fact, Cameron wanted OJ simpson to be the terminator but decided against it (ironically) because he felt OJ could not convey a convincing killer.

Schwarzeneggar was actually considered for the role of Kyle Reese first, but it’s probably a good thing that his role switched due to Cameron wanting someone bigger and intimidating playing the role (kind of a no-brainer in our opinion). His ability to play such a brutal and murdering cybernetic robot with no emotion was excellent and well portrayed.

We weren’t too familiar with Biehn’s filmography prior to The Terminator. With that being said, we think he did a pretty good job executing the role of Reese. What we were intrigued about was casting someone who had more smarts to fight the terminator rather than another body builder. In addition, he’s a kind of a scrawny guy. As we talked and thought about it more, you wonder how much actors like Schwarzeneggar and Stallone influenced roles of villains and superheros.

Hamilton does a great job playing Connor, who’s arc is the most interesting, but doesn’t reveal itself until close to the end of the film. For most of the movie, she’s an unassuming and almost damsel in distress of a character. She doesn’t believe in herself which makes her doubt Reese’s story of her raising the leader of a future resistance. Maybe it’s because the terminator has closed in on her and is about to take her life, but she musters up a lot of courage to start fighting back, even yells at Reese as he’s badly injured, “On your feet soldier!” While Reese is the one who damages the terminator, its Connor that ultimately leads the cyborg a certain way so she can crush and defeat it.

The police lieutenant that gets shot by the terminator during the police station … we think massacre is a good word for it. Winfield would go on to appear in several other sci-fi outings, albeit small and brief roles, including Star Trek II: The Wrath of Khan, the Star Trek The Next Generation series, as well as Babylon 5. He eventually had a bit of a voice-over career as well.

The police sergeant that also gets blown away during the incredible police station shoot up sequence. Henrikson was the veteran actor in the film actually with a number of credits prior, including Close Encounters of the Third Kind, but only had a small supporting role in this film.

And a short and brief appearance by a very young Bill Paxton as a young punk towards the beginning of the movie who Sean and Jeremy thinks was killed by the terminator, but Chris wasn’t so sure and thinks once he saw what the terminator did to his friend just though, ‘ok man, you can have and take whatever you want.’

Now for the time, the special effects in The Terminator were top-notch. The flash-back scenes of the future (oxymoron?), or vignettes as they are referred to, for Reese’s character were really well done and very detailed – the close-up of the skulls being crushed, the smoke / vapor in the background (which Chris made the point that this gave to scenes depth), and the energy / laser weapons used. These, again, were done and executed well and we think pretty much still holds up until today.

When the terminator/Shwarzeneggar was cutting his own flesh to get to the machine part of himself underneath, the part where he goes into the forearm is nicely depicted. The detailed machinery moving with a bit of blood and the fake skin flapped open was pretty realistic in our opinion. However, the animatronics of the whole terminator sort of falls flat in today’s world, meaning it did not hold up as the years have passed by. It’s clearly a fake piece of machinery that sort of resembles Arnold, but not to the point where its very convincing.

Did you catch the obvious product placement the The Terminator Nike shoes in this film? Granted its only twice, but stands out. The first time we see it as Reese is stealing clothes within the department store towards the beginning. The changing room curtain is closed, but we see Reese step down with his feet and sure enough, the Nike’s are right there. There was a second time as well, but we can’t remember exactly when it was, either in the police station or when Reese gets out of a car or something? If you catch it, remind us and let us know.

This wouldn’t be the only time the franchise uses product placement. Pepsi was a pretty well featured product in Terminator 2: Judgement day and then Pepsi Max in Terminator: Genisys.

This film gets a “Would Host Viewing Party” on our scale. So get a flattop haircut and your leather jackets for we recommend you and your friends sit down and enjoy this film together as it is definitely a classic. It had such a small budget of $6.4 million, yet made $78.3 million … crazy impressive! In 2008, the Library of Congress deemed this film worthy of preservation, which we here at Force Fed Sci-Fi think is a great honor for a film. All-in-all, Schwarzeneggar and Hamilton do a great job with their characters in The Terminator, the effects are great for the time and some still hold-up today, and finally, the story captivates its audience despite the small amount of dialogue compared to other films.

So what did you think of The Terminator? Do you agree that this film still holds up? How do you feel about it being selected for preservation by the Library of Congress? And if you know where to get those sick Nikes Kyle Reese rocks in the film, let us know where! Don’t forget to subscribe to our podcast so you don’t miss an episode! Thanks for visiting!