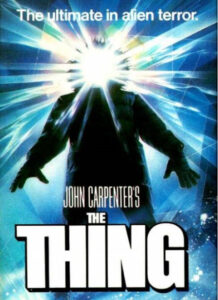 This time, we take a look at the body horror isolationist classic The Thing and along the way we ask what’s the deal with Kurt Russell’s hat, what kind of research happened at Outpost 31 and was this movie spoiled right from the beginning? Let’s dive in….

Universal had originally set the budget for The Thing at $10 million but this was increased following Carpenter’s suggestion as well as storyboards for the visual and creature effects that were to be created by artist Rob Bottin. Carpenter took to Bottin’s designs so well that he was able to influence the story as well as the actor’s rehearsals.

His suggestion that the Thing would retain a little piece of what it had previously assimilated and would be seen in future creatures. He also contributed the idea that whoever was taken over would not be aware that they are the Thing until it would start to reveal itself in a large group setting.

Bottin worked so much on the film that he ended having to be hospitalized at different points in production for exhaustion, double pneumonia and bleeding ulcers. He also never took a day off for over a year and lived on the Universal backlot.

Bottin was only 21 years old at the time and had previously worked on a horror film titled The Howling and due to his hospitalizations, special effects legend Stan Winston was brought on to assist in production specifically for the Norris Thing scene. Winston even refused to take a credit for his work and instead received a “thank you” in the final credits.

What is the Message of The Thing?

Carpenter is a fan of incorporating an overall message in his films. His later films are more overt with this messaging and early films hide this in some subtle ways. He has repeatedly mentioned that Halloween is meant to address the notion that the suburbs are safe. The majority of his films have this message in some way but Carpenter is also outspokenly liberal in his political views and this was apparent in the cult classic They Live about disguised aliens that have hidden among the population and have placed subliminal messages to unsuspecting people to “Purchase” and “Reproduce”. While The Thing lacks any sort of major political message, Carpenter addresses themes of nihilism, isolation and the fact that danger can be lurking even in the most remote part of the world.

Mystery has continued to surround the themes of the film most specifically around the ending and whether or not the two survivors, MacReady and Childs, were assimilated by the Thing. Even Carpenter himself has weighed on this speculation and has asserted that Childs, who was mysteriously absent for the majority of the climax, was taken over by the Thing and is now waiting to accomplish its mission at a later time.

Carpenter has inferred that someone was the Thing at the end of the film and it must be noted that because Childs’ breath is not visible in the frigid weather while MacReady’s is visible, which, could be an indicator that Childs was assimilated. However, these theories have been disputed by actors Kurt Russell and Keith David.

There are other mysteries that remain unsolved for the film including what the Norwegians were saying at the beginning but if you speak Norwegian you already know that, who exactly sabotaged the blood test and when certain characters were assimilated. These mysteries both solved and unsolved are what have helped to make The Thing an enduring classic even if it wasn’t well received at the time of release.

A Classic 20 Years in the Making 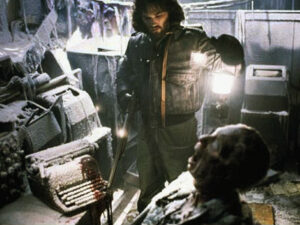 When The Thing was released in 1982, it came out to terrible reviews with some calling the film “instant junk”, “boring” and “despairing”. It probably didn’t help that E.T.: The Extraterrestrial came out earlier in the year and the film Blade Runner was released on the same weekend. Along with those films, other major releases included Poltergeist, Conan the Barbarian, Mad Max 2, Star Trek 2: The Wrath of Khan and Tron made the year pretty crowded at the box office.

While The Thing managed to recoup its budget at the box office, it wasn’t enough to save John Carpenter’s career at Universal. The disappointing returns for The Thing caused the studio to buy out the remainder of his contract and he lost the opportunity to direct 1984’s Firestarter.

Carpenter would eventually go on to direct films like They Live, Starman, Big Trouble in Little China and Vampires, his films in the 21st Century like Ghosts of Mars and The Ward were met with little fanfare. He has found recent success as a producer for the remake of Halloween in 2018.

The Thing has managed to live on as sort of a cult/cinematic classic hybrid with contemporary reviews coming around to the message and tone of the film. It’s found its way onto many “Best Of” lists and its impact can be felt across many different forms of media including shows like The X-Files and Stranger Things, video games like Resident Evil 4 and Among Us as well as other films like The Faculty and Slither.

It even received a video game adaptation that was released 2002 to critical acclaim. A miniseries sequel was even planned for the Sci-Fi Channel in 2005 that was to be developed by Frank Darabont but these plans never materialized. A prequel was released in 2011 detailing what happened at the Norwegian camp before the events of Carpenter’s film but this was a critical and box office disappointment. However, in 2020, Universal and Blumhouse announced plans to develop a remake of the film with the involvement of Carpenter possibly in a similar capacity to his role for 2018’s Halloween.

On our unique scale for the podcast both Sean and Chris were in agreement for their rating of The Thing in calling it a WOULD HOST A VIEWING PARTY. Both hosts cited the creature effects as well as the different messages and relevancy of those themes bolstered by the performances of the actors.

What did you think of The Thing? Listen to the full episode to hear our thoughts as well as our choices of Lens Flares and Red Shirts and please leave a 5 star review wherever you listen to podcasts. Tune in next time as we dive back into the Marvel Cinematic Universe and review 2015’s Avengers: Age of Ultron!