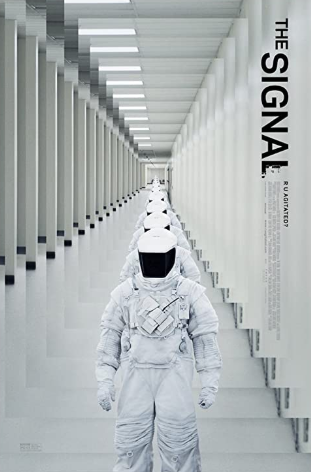 This time, we’re taking a look at 2014’s The Signal and along the way we’ll ask what exactly is this film going for? What would you do with bionic appendages? And what are the rules for a successful road trip? Let’s dig in….

The Signal Movie Cast and Crew

Directed by William Eubank: Eubank’s first film, a sci-fi Indie feature titled Love, received critical acclaim and was then given a significantly larger budget to create The Signal. Love’s budget was a meager $500,000, while this film was budgeted at $4 million. However, our podcast show’s hosts speculated that maybe The Signal would’ve been better served as an anthology type series or even as a video game. Eubank’s latest film, Underwater, was a commercial flop and given the lack of success seen with that film, Eubank may very find himself in director jail while he labors to find his next project.

Starring Brenton Thwaites as Nic: 2014 was a big year for Thwaites as he also appeared in The Giver, Ride and Maleficent. He has since gone on to appear in bigger blockbusters like Pirates of the Caribbean: Dead Men Tell No Tales and is now starring as Dick Grayson/Nightwing on the DC Universe exclusive Titans. However, The Signal doesn’t take advantage of Thwaites’ ability as an actor as most his characterization occurs via the use of flashbacks or from situations described by his compatriots during the film.

Olivia Cooke as Haley: A relative newcomer at this point in 2014, Cooke also had a starring role in the modern retelling of the Psycho narrative in the A&E series Bates Motel, as an early love interest of Norman Bates.
She’s since appeared in the Steven Spielberg adaptation of the novel Ready Player One. However, her character of Haley in this movie is largely absent for the second act of the film and much like with Brenton Thwaities, the majority of her acting talents were left off the table.

Beau Knapp as Jonah: Knapp has been working steadily since 2011 and has quickly earned a reputation as a character actor having appeared in films like Super 8, Run All Night, Southpaw, The Finest Hours, and The Nice
Guys and Death Wish (2018). Much like Cooke’s character, Jonah is front and center in the first act, largely absent in the second act, and sacrifices himself in the third act so Nic and Haley can briefly escape.

Laurence Fishburne as Dr. Wallace Damon: There isn’t much else we can say about Fishburne’s legendary career at this point. For further details about Fishburne, check out our past episode covering The Matrix. There are times where it feels like Fishburne is too big for this film, but he adds a certain gravitas when surrounded by his younger counterparts.

The Signal is noted for its unique evolution. It initially begins as a road trip film as Nic and Jonah are helping Haley across the country from M.I.T to Cal Tech. There’s also a romantic subplot with Nic contemplating the future of his relationship with Haley and if long distance could work for them (spoiler, it never works). Nic is also afflicted with some type of vague degenerative disease, but it’s never explicitly mentioned as to what that disease is and this is further enforced through the use of flashbacks that imply Nic was able bodied prior to the events of the film.

While the three friends on this road trip, Nic and Jonah are tracking a mysterious hacker known only as the moniker
“Nomad” who is partially responsible for all of them landing in trouble while attending M.I.T.. Nomad then lays a series of breadcrumbs to an unknown location somewhere in the Southwest when they are confronted or abducted. At this point in the film it’s unclear what exactly happens, and they suddenly awaken in a research facility run by Dr.
Damon who enlightens Nic that what they encountered in the desert was probably an alien.

Once the film makes this turn, things get even weirder from there. We gain almost no insight into the purpose for keeping Nic, Jonah and Haley in this facility as well as no insight into who Dr. Damon really is and what he’s hoping to learn from them. This act of the film then takes an even stranger turn, as is that was even possible, when we
discover that Nic’s human legs have been replaced with bionic legs.

However, he is not willing to trust these “gifts” just yet as his mission now becomes to free Jonah and Haley from their imprisonment. While Haley and Nic are able to escape and begin to navigate the barren desert, they run into Jonah, who has also been fitted with bionic appendages and speculates that they are trapped in Area 51 and that they are being tested for some unknown reason.

The film just gets even more ridiculous from there culminating in a slow motion action scene torn straight from a Michael Bay film as Jonah sacrifices himself in vain only for Nic and Haley to be captured once again. Jonah has mastered the use of his new legs at this point and reaches supersonic speeds to try and escape, only to find that they are all trapped on an alien spacecraft and Damon is merely an alien robot.

To be honest, this sounds more like a really long episode of The Twilight Zone and not a major motion picture. The film is making an effort to top itself every 15 minutes, but this “twist” at the end is more confusing and makes us question the entire nature of the film.

At one point in the film, the main characters receive a bionic appendage or appendages. Nic receives bionic legs, Jonah’s arms are replaced and while it isn’t clear what Haley received, an implant is discovered in her back along her spinal column. Bionic/cybernetic appendages have been a part of science fiction films for years, but the devices shown in The Signal are incredibly advanced.

Prostheses themselves are quite advanced with some of the earliest evidence being found dating back to the Roman and ancient Egyptian kingdoms in our own history. Current prostheses are made from materials like titanium and carbon fiber. While bionic prostheses are still a far off dream, incredible advancements are being made in that field. These type of prostheses can respond to the remaining muscles in the limb and move the prosthetic implant in the appropriate way, but can also be incredibly expensive.

Neural interfacing is technically what is done with today’s prostheses, a medical procedure in which a surgeon implants a series of electrodes designed to read muscle commands and then tells the prosthesis what to do. The Defense Advanced Research Projects Agency (DARPA) actually allocates millions of dollars every year to teams of dedicated researchers to develop this technology. While it’s unlikely we’ll see prostheses that can punch out a concrete barrier or enable the wearer to run hundreds of miles, it is nice to know that there is a lot of information available in regards to the progress of these scientists.

After premiering at the Sundance Film Festival in 2014, The Signal received a wide release in June of that year to limited theaters to the tune of just over $600,000 total for its box office run. It did find new life on home media raking in an additional $800,000 in those sales, but it was not enough to make up the $4 million budget. It has developed a cult following since its release and can now be found somewhere in your Netflix catalog at the time of this posting.

Our podcast show’s hosts were somewhat divided on their rating on our scale for The Signal with Chris and Sean calling the film a WOULD NOT WATCH citing the poor execution of the film’s plot along with the odd dialogue, overuse of flashbacks and no clear theme being the main detractors. Producer Jeremy cited the same items while calling the film a WOULD WATCH as it makes a decent origin story, but feels the audience is left hanging. The Signal is a divisive film, but will find a home and appeal among the fans of hardcore science fiction. It’s possible that the film could find new life in the form of a television show as a means of continuing the story, but that remains to be seen.

What did you think of The Signal? What kind of bionic appendages would you like to have (keep it clean people, lol)? Tune in to the episode to hear our choice of Lens Flares as well a new character in the form of a French accented cow!

Please listen, rate and subscribe with your preferred podcast app so you never miss an episode and tune in next time when we dive back into a franchise we covered in the early days of the podcast when we review Back to the Future Part II!