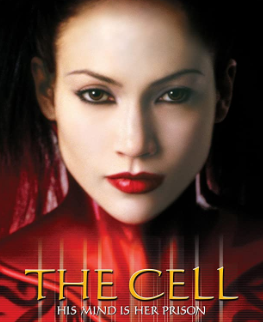 This time, we review the Silence of the Lambs rip off The Cell (movie) and along the way we ask just how obvious can the religious symbolism get, did this movie contribute to society’s morbid obsession with serial killers and why is J-Lo’s butt front and center in the frame? Let’s dig in….

The Cell Movie Cast and Crew

Directed by Tarsem Singh: Prior to directing The Cell, Singh had built a career in the early 1990’s directing several popular music videos including R.E.M’s “Losing My Religion” and Lou Reed’s “What’s Good.” While The Cell serves as Singh’s directorial debut, he’s since gone to direct heavily stylized films like Immortals and Mirror Mirror.

Written by Mark Protosevich: While Protosevich doesn’t have many credits to his name, he is just as famous for the films he didn’t get to work on. Prior to the Batman film series being rebooted in 2005, he was approached to write a sequel for Batman & Robin. He had even finished a draft and helped cast several roles before Batman & Robin flopped and any plans for a sequel were immediately scrapped. He was also contacted by Steven Spielberg for story ideas for a planned fourth film in the Jurassic Park franchise before a soft reboot occurred in 2015 with Jurassic World.

Jennifer Lopez as Catherine Dean: Lopez’s musical career was just beginning in 1999 & 2000, but she had built a successful career as an actress having appeared in films like Jack, Selena, Out of Sight and Anaconda. Following her appearance in The Cell, she transitioned to romantic comedies to avoid being typecast as well as focusing on a music career that has garnered international fame.

Vince Vaughn as Peter Novak: Vaughn’s career direction was still unclear at this time after appearing in the highly acclaimed Swingers as well as the maligned sequel The Lost World: Jurassic Park and the unnecessary remake of Psycho. Vaughn’s portrayal of the dogged FBI agent even had to be toned down in the editing process in order to soften his character.

Vincent D’Onofrio as Carl Stargher: We’ve covered D’Onofrio on our previous episode reviewing Men in Black but his career has been long and impressive which includes long runs on Law and Order: Criminal Intent, Netflix’s Daredevil as well as film appearances in Jurassic World and the recent Magnificent Seven remake.

The Cell vs the Losing My Religion music video

As our podcast show hosts point out during the episode, the symbolism of The Cell is obvious at times and this can be traced back to Singh’s beginning career as a director of music videos. The film has not transitioned well in the digital age as the film appears grainy at times as well as it having issues in sound design. In addition, films released during this same time have made the successful transition to a digital format, The Cell has not achieved that as of yet.

The graininess of the film gives it a sort of music video quality which would have been fine if The Cell was a shorter film. Having to sit through a nearly two hour long R.E.M video is exhausting. Singh even managed to recycle several of the sets he used for R.E.M’s now legendary music video for the song Losing My Religion.

There are some aspects of the film that are beautifully framed such as the opening dream sequence in the desert and the final battle sequence between the angelic Deane and the lizard demon version of Stargher.

However, several of Singh’s artistic influences are incredibly obvious upon further research and include references to 20th Century artists like H.R. Giger, who created the design of the creatures in the film Alien, and Odd Nedrum who infamously created a painting of a woman defecating in the forest. If he utilized imagery from Salvador Dali, that may have been pushing it.

Though, one strong aspect of the film is the incredible costume design. They are elaborate and suit the characters in these exaggerated versions while they are exploring Stargher’s mind.

Over the past several decades, society has developed a morbid curiosity with serial killers. Beginning with the nationally televised criminal trial of Ted Bundy, we’ve become obsessed with learning more and more about these infamous mass murderers and this fascination has made its way into Hollywood.

Following the success of Silence of the Lambs in the early 90’s, we’ve gone deeper and deeper into the rabbit hole of madness. Jeffrey Dahmer was caught merely a year before the release of SOTL and was later killed in prison in 1994 and in the same year, John Wayne Gacy (aka “The Killer Clown”) was executed in prison. In the following year, famed FBI agent John E. Douglas, released his book titled Mindhunter about the early days of developing the science of criminal profiling. This book would later serve as the inspiration behind the acclaimed Netflix series of the same name.

Many podcast listeners have likely subscribed to a podcast that discusses the mystery of the Zodiac Killer. If not, you’re going home to binge a season of Criminal Minds or reading a new book about Jack the Ripper. Serial killers and their crimes have been the subject of numerous films, television shows, documentaries, video games and podcasts for years and will likely continue to remain a part of our entertainment culture.

It’s not hard to imagine that screenwriter Mark Protosevich was reading Mindhunter and thought about a way to literally go into the mind of a serial killer and put that into his script for The Cell, either that or he watched Silence of the Lambs and thought what drives Hannibal Lecter and made his own film.

The Cell Box Office (and its success?)

Despite the mixed critical reception, The Cell was a box office success having grossed over $100 million and Roger Ebert even named it as one of his favorite films of the decade. We have to question what Ebert was seeing that we weren’t, but we have to disagree with the legendary critic on that one.

Most of the praise went to the costume design as well as the performance of the cast, but noted that its attempt to replicate the aforementioned Silence of the Lambs fell short. It even received a direct-to-video sequel in 2009 but this eliminated the science fiction aspect and instead focused on a psychic investigator who is tracking a serial killer cult. To the surprise of no one, this film is not on our list for future review.

On our unique scale on Force Fed Sci-Fi, our hosts were in agreement as both Sean and Chris labeled this film a WOULD NOT WATCH for similar reasons. The technical issues didn’t help while watching, the odd choice of aesthetics throughout the film are off putting at times, and the incomplete character arcs all add up to a film that misses the mark while trying too hard to live up to the films that influenced it.

So what did you think of The Cell? Listen to our episode to find our choice of Lens Flares and maybe the return of a Yellow Shirt and more! As always, please listen, rate and subscribe to The Force Fed Sci-Fi Movie Podcast on your favorite podcast app of choice and tune in next time as we review the Karl Urban post-apocalyptic buddy cop film Dredd!