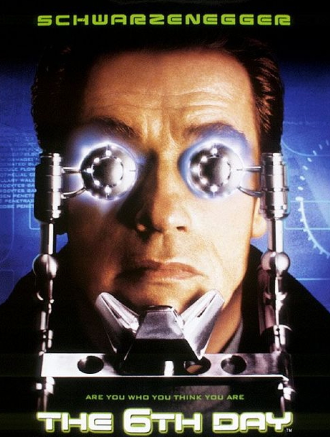 This time, we’re taking a look at one of Arnold Schwarzenegger’s unheralded blockbusters with The 6th Day and in this entry we discuss – 1) how Arnold consistently finds himself waiting to do another Terminator film, 2) did this film actually predict the resurgence of the XFL, and 3) what our thoughts are on cloning a beloved pet. Let’s dig in……

Thanks to several title cards at the beginning of the film, we are told that this film is set in the future, but it is never explicitly mentioned where in the future the film takes place. In a behind the scenes documentary, Schwarzenegger says the film is set in 2015, but no indication is given to this at any point in the film. Since the film came out in 2000, the filmmakers assumed that the next fifteen years would be a banner year for scientific advancement and invention.

For starters, the technology is advanced even by today’s standards with the prominent example being cloning. Dolly the Sheep was only cloned in the mid 1990’s. So, to assume that humanity would be able to clone humans in 20 short years following this is a massive leap. The history of Dolly and a brief overview of cloning will be covered below, but much like with artificial intelligence, there’s no clear roadmap to get to cloning at the levels seen in the film.

The more practical application of cloning in The 6th Day seems to be for the use of growing more crops to alleviate world hunger as well saving animals from the brink of extinction (did no one see Jurassic Park?!). In addition to cloning, we see in the film that:

While cloning is still a far off dream, a gigantic breakthrough was made in 1996 when Dolly the Sheep was born via cloning.

The clone was a result of an experiment at the University of Edinburgh. Her existence wasn’t announced to the world until 1997 and by all accounts, she lived a very happy life until her death in 2003.

She developed a lung cancer that is common among sheep; other members of her herd also died of the same disease. She was also diagnosed with advanced arthritis that her caretakers were alleviating with the help of painkillers until her passing. Dolly was expected to live to about 11 or 12 years old, but she passed a few months before her 7 th birthday but an autopsy revealed that her conditions were common.

While it is tragic that she passed before living a full life, this is a common reality among farm animals and things like this happen. However, the legacy of Dolly continues to this day. As of 2016, there were 4 identical clones of Dolly that were still alive and healthy. Given that the most recent update was from 2016, that information may have changed since then, but the results of the Dolly experiment live on.

Of course, there have been no attempts to clone humans, but many animal developments continue to this day. A research center in northern Spain attempted to clone the Pyrenean ibex, an extinct species. This experiment was successful for a short time, but the clone died shortly after birth. China has also reported the successful cloning of primates to use for medical research.

The type of cloning seen in The 6th Day and Jurassic Park are still far off, but these advances in the real world could provide hope for cloning. The question will be, where do you draw the moral line?

Would You Want a Re-Pet?

In the film, human cloning is illegal due to several horrific failed experiments, but cloning animals is still legal and a whole cottage industry has sprouted up in the future; that of cloning recently deceased pets.

Adam’s family dog passes away early in the film and is hesitant to clone Oliver the dog until he arrives home one night and sees a clone of himself and his dog enjoying a party. It’s unclear how much this costs in the film or how exactly it works compared to the human cloning, but its clear Adam begins the film with mixed feelings towards the idea. For starters, he calls the pet clones “freaks of science” and doesn’t want it near his daughter until his friend, Hank, admits that his pet is a clone following a tragic fall from his home.

The idea of cloning a pet came up among our podcast show hosts and the consensus was that, while the passing of a beloved family pet is sad, it can be an important opportunity to teach children about death. Anyone who has a pet will tell you that while it is incredibly rewarding, it is an emotional hammer when they get sick and have to be put down. We’re sure that there are people out there who would use this service if it were available, but the ethics of the decision should be weighed carefully before any such choice is made.

Our hosts were unanimous in their review and rating of The 6th Day with Sean, Jeremy and Chris calling it a WOULD WATCH. There was some debate about whether or not the film does age well. It was overshadowed by other family friendly movies at the time of release and a polarizing review from legendary critic, Roger Ebert, didn’t help the box office take in the year 2000. It also can’t be ignored that Schwarzenegger was probably box office poison with his flops in the mid 1990’s. The action scenes can be abrupt at times and some of the technology, particularly the Sim-Pal Cindy doll, is a little creepy.

What are your thoughts on The 6th Day? Do you think the film has aged well? Would you consider cloning a deceased pet? Tune in to the episode to listen to our hosts choices of Red Shirts and Lens Flares and whether or not they’d clone a pet. Please listen, rate and subscribe to our podcast show and feel free to check out our Facebook, Twitter and Instagram pages!