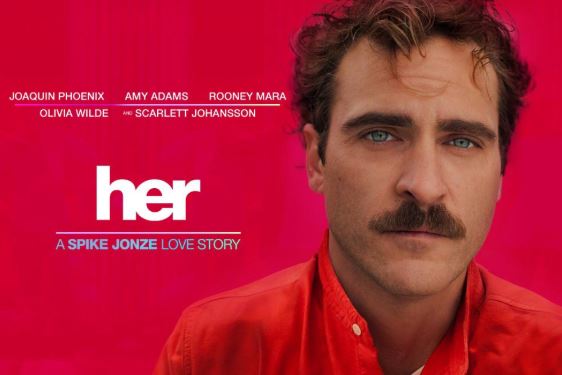 Watching the film Her will definitely bring about emotion with its audiences. It was just a perfect mix of great writing, great directing, and a great screenplay that gives us a deep and thought-provoking film. So join us this week as we discussed and talked about Her, the Her movie cast, the missing Her movie soundtrack, and giving our final Her film review!

What is the film Her about?

Spike Jonze‘s film Her is about a recently divorced man named Theodore Twambly, installs a new personal assistant operating system. Eventually, he falls in love her (she names herself Samantha). They help each other grow as Theodore helps Samantha evolve beyond her programming and Samantha helps him navigate through his post-divorce emotions and loneliness. We think that one of the main messages this movie is trying to get across is that you are allowed to be more than what you are, especially if you are limiting yourself.

We think Joaquin did a fantastic job in this film, despite how odd he can be sometimes. The one thing we do know is that he really does commit to the roles he plays. Like many of the other cast members, he did a great job conveying the emotion and feeling of his character and the film to audiences.

Scarlett Johansson as the voice of Samantha

Johansson was actually not the initial voice of Samantha. It was Samantha Morton who originally voiced this role. However, later on, Spike Jonze decided in post-production that Morton didn’t provide what was needed for this film and with her blessing, Johansson was casted as the artificial intelligence character. (Photo by Gage Skidmore)

While Adams has a smaller and supporting role in this movie, she did great just like Joaquin did by conveying the emotion her character was feeling to the audience. There was actually a bit of a side-story cut from this film about Adams’ character’s documentary that she is making, which obviously would’ve resulted in more screen time for Amy Adams, but Jonze had the original two and a half hour runtime cut down to 2 hours with the help of Steven Soderbergh.

Arcade Fire and Owen Pallet composed the music and score for the film Her.

For some odd reason though, there was never an official soundtrack released for this movie!
Why not? Who decides these things? This music for this film was actually very good in our
opinion and we think the soundtrack would have sold well! There have been rumblings of it
being released, but no good solid leads at this point.

The Her score was ultimately nominated for an Academy Award at the 86th Academy Awards
show, but lost to Steven Price’s score for the film Gravity.

Scarlett Johansson Song in Her: “The Moon Song”

“The Moon Song” was composed by Karen Orzolek and the lyrics were written by her and director Spike Jonze! During the film, Scarlett Johansson sings the song which fit perfectly within its setting. During the end credits, Orzolek can be heard singing it, though. It was nominated at the 86th Academy Awards show for Best Original Song. Unfortunately, this nomination lost as well. This time to the well-known and at the time over-play song from Frozen, “Let It Go” (rolling eyes, haha!). In any case, “The Moon Song” is a very soft and gentle song, but captures the theme of love very well. Take a listen below! 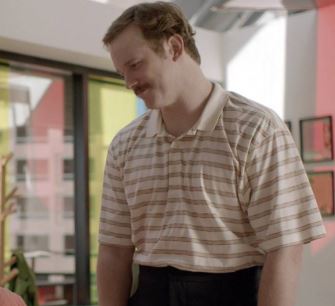 Sean’s Lens Flare this week is the fact that nobody wears belts in the future in this film apparently. Chris argues that maybe that’s just the style for that time, but Sean says that if you have them, why aren’t you using them! So Chris says it’s a fashion statement, but Sean’s reasoning is sound as if we stop using them in the future, why would we include them on our pants anyways?

Chris’ Lens Flare this week is the excessive facial hair that we see in Her. Both Sean and I agree that this wasn’t needed as it does look odd. But again, it’s probably the future style (at least in the mind of Spike Jonze). Chris has a good point though, not many people look good with a mustache these days, with the exception of Tom Selleck and Sean said Sam Elliot is allowed as well.

Was Her Nominated for an Oscar?

If you read above, you already know that Her was nominated for Best Score and Best Original Song at the 86th Academy Awards, but unfortunately lost to Gravity and Frozen, respectively. In addition, the movie was nominated for Best Production Design, Best Screenplay, and Best Picture. Her lost to 12 Years A Slave for Best Picture. I can’t really make an argument though as I will be honest and haven’t seen that film.

The only award Her won was Best Screenplay. We think it was well deserved as this film was well written. There’s really not any moment where you get bored and it flows well. Even at the many moments where there is silence for dramatic effect to help the audience feel the emotions the film is conveying by its actors.

We all agree that the movie Her deserves a “Would Own” on our rating scale. It won Best Screenplay and deserved it since as we said, the movie really flows well. The emotion felt while watching this film is intense! While it may be a “melancholy” feeling while watching this movie, it’s at minimum at least worth a watch once in your life, if not having a desire to own it afterwards.

So what did you think of the movie Her? Did you think it deserved to win Best Screenplay? Do you think it should have won Best Picture or any of the other categories it lost in? Leave your thoughts and comments below and make sure to listen to our podcast episode about this film!