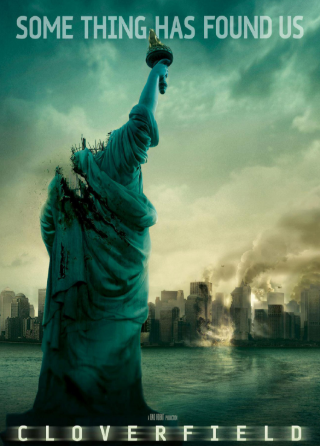 This week, we abandon a going away party for one of our best friends and risk our lives to rescue a friend on the other side of town after watching Cloverfield! Along the way we’ll go over the Cloverfield movie cast and how they thought they were auditioning for a sitcom, talk about the Cloverfield ending and future, and give our Cloverfield rating. In addition, we take a look back at the tumultuous history of the production along with the many name changes, how this film is just another movie where Manhattan and New York is destroyed and how Cloverfield really became a pioneer in the found footage genre.

We were surprised to learn that the casting was carried out in secret despite not having A List actors at the time and during auditions, the prospective cast members were given scripts from JJ Abrams’ television shows like Lost and Felicity.

In one of his early film roles, Miller doesn’t exactly show off his comedic chops but proves he can perform well in an ensemble cast and serves as the film’s narrator/camera operator until he’s killed by the mysterious monster (possibly chopped in half?).

Prior to Cloverfield, Caplan was well-known from her role in Mean Girls but really branched out when taking on this film. While Sean may not have liked her character, she softened herself to the audience during intimate moments with Hud, she’s unceremoniously killed (maybe even the most gruesome death) before the group has a chance to escape.

While David is more known for roles in television (Narcos, The Deuce) this was another one of his early roles. Sean and Chris did feel like Rob was a tad irresponsible in dragging his friends and brother to rescue his one-time hookup through a city being ravaged by a giant monster (didn’t really work out for any of them now did it?).

Producer JJ Abrams was inspired to make Cloverfield after a trip to Japan and seeing how popular the Godzilla films were and wanted to give an American Godzilla to movie audiences. We think a Godzilla reboot would’ve just been easier at that time in Hollywood history. Of course we got that eventually anyways. (Check out our episode and review on Godzilla: King of the Monsters if you haven’t gotten a chance)

While the film was initially titled Cloverfield, the film underwent several name changes following the hype following the debut of the first trailer. Titles such as Cheese, Slusho and Greyshot were considered before the filmmakers returned to Cloverfield for the final name. It can be inferred that these names were chosen to just throw people off, like many studios and filmmakers do these days.

Filming took place on opposite ends of the United States with most of the exterior shots actually shot in New York City and many of the action scenes filmed on the Warner Bros backlot in Los Angeles. Speaking of New York City…

Hollywood’s Love for Manhattan and New York Destroyed in Movies 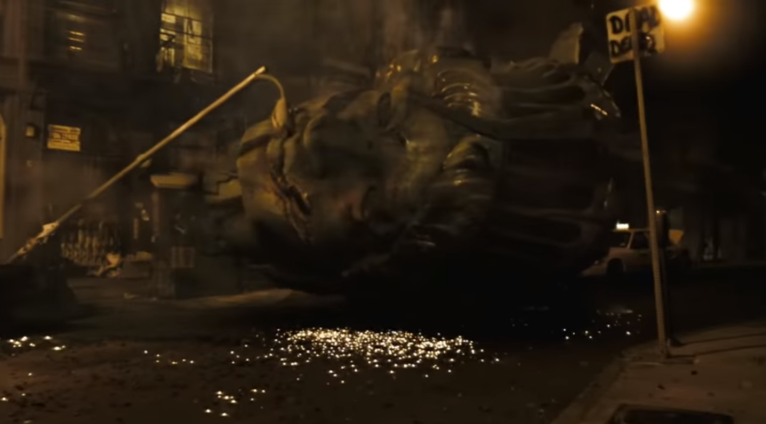 While researching Cloverfield, Chris came up with a list of films that have featured the destruction of New York City including (but not limited to):

There are plenty of other films out there that we didn’t list as well that show New York destroyed in movies.

Why the portrayal of the destruction in Manhattan so much?

We think it’s simply just due to the fact that New York has an iconic skyline with incredible skyscrapers. Hollywood does seem to be trending away from destroying Manhattan though, in favor of locations like Los Angeles, London, and even our home city of Chicago a bit.

Prior to Cloverfield’s release, the found footage genre had fallen out of favor in Hollywood. The Blair Witch Project certainly reinvigorated the genre, but not enough to make audiences want more of them. But 2007 saw a rise in not found footage films, but good found footage films like Paranormal Activity and REC and these films primed audiences to see a new film in Cloverfield and this was easily the most successful of those films.

Following Cloverfield’s release, we saw films like Diary of the Dead, Quarantine and District 9 which would go on to receive multiple Academy Award nominations. There would also be more entries in the Paranormal Activity franchise along with Apollo 18, Europa Report and Into the Storm.

The end of Cloverfield results in pretty much all of the characters we get to know being killed in one way, shape, or form. Maybe for a second there the audience thinks that Rob and Beth are going to make out alive somehow as they are the last two to make it a “and they live happily ever after” moment, but that’s not the case as the attempted bombings of the monster are executed.

What about Lily though? We didn’t actually see her become a victim. We saw her get in a helicopter safely, unless the helicopter Rob, Beth, and Hud see crash is hers. Did any of you as audience members catch that? If you did, let us know in the comments!

Finally, there’s the audio heard after the credits. Many think listening to it normally they hear “help us.” We don’t hear that honestly; however, when the audio is heard backwards it’s pretty clear that something along the lines of “It’s still alive” or “It’s alive” is heard. So, we can infer that the monster had survived the military’s attempted bombings.

While audiences have already been treated to two sequels (10 Cloverfield Lane and The Cloverfield Paradox), JJ Abrams and Matt Reeves have confirmed that a sequel is in development. While no title or casting notes have been released at the time of recording, Abrams is notorious for keeping production notes under wraps and running a closed set for all of his films. The rumor is though, that this next film may be a direct sequel to the original Cloverfield movie. We’ll just have to wait patiently (which I’m terrible at doing).

We at Force Fed Sci-Fi are in agreement on a WOULD WATCH verdict on our unique scale. We felt like the characters were not likeable with the most egregious of them being Rob who risks his friends’ lives to rescue Beth. While we do enjoy this film as it is, we do wonder how this film would look if it weren’t filmed in the found footage style. It’s also out shadowed by the next entry in the franchise and doesn’t feel coherent with the direction of the other films. However, it’s still possible that more films may be made in this Cloverfield universe that could help connect all of the films even more than we’ve seen already.

What are your thoughts on Cloverfield? Did the shaky cam effects bother you? What did you think of the monster? Would you like to see a non-found footage version of this movie? Leave your comments and thoughts below and don’t forget to listen to the whole episode to hear Chris and Sean rant about the hipster culture permeating the film. Also, please subscribe to the show so you never miss an episode!