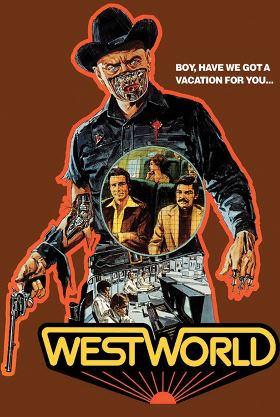 This week we take a look back at the Westworld original movie from 1973 that inspired the current hit HBO series. We’ll dive into some information about the Westworld movie cast, compare the Westworld movie vs show, give our own Westworld film review and rating, and more. Let’s enjoy ourselves as we talk about some murderous western robots! (Make sure to try out listening to the podcast episode and rate us on your favorite podcast app!)

At an amusement park containing three different ‘worlds,’ Westworld, Medieval World, and Roman World, visitors pay $1000 per day to play out their fantasies no matter how good intentioned or ill-intentioned they are. However, when a virus begins to plague the robots and androids that are the main part of the entertainment, begin to act differently and eventually become violently towards the park’s guests. The film eventually focuses on one chase of a seemingly unstoppable killing robot after a man named Peter, who just had his friend John murdered. Does he survive? Watch the film, listen to the podcast episode, or read on to find out!

While Crichton had already made one TV film prior to Westworld, this movie was his feature film directorial debut. And of course, Crichton was more of a writer with his career, therefore; this film was scripted by him as well. There was actually a question of why Crichton just didn’t make this story into a book. He felt this story was more of a visual-told one. While we appreciate Crichton being willing to make this into a feature film, we think it would’ve done well as a book / novel as well.

Many of us made the point that Westworld has many parallels to his famed Jurassic Park novel, which as we know was made into a film itself (check out our podcast episode for Jurassic Park). Essentially, both stories involve a tourist park attractions attacking its visitors: one story has robots killing and the other has dinosaurs killing. While the main story elements remained the same, we are glad he wrote Jurassic Park as it was turned into one of the best films ever made.

Yul Brynner as The Gunslinger

The legendary Yul Brynner was the marketed character in this film. Understandably so though, as he became a household name in the year of 1956. That year he starred in three major films including The King and I (his most well known role), The Ten Commandments, and Anastasia. He won the Best Actor Academy Award for his performance in The King and I. Possibly one of the best years any actor has ever had. We also cannot disregard his performance in the original film of The Magnificent Seven either.

His role in Westworld was definitely a bit different, although our podcast host Chris states he is basically re-acting his The Magnificent Seven role, but just as a robot. In any case, Brynner actually doesn’t have many lines, most of which take place in a bar scene towards the beginning of the film. While he his dialogue was limited, it was quite comical as he made fun of Richard Benjamin’s character in the bar scene.

While the last third of the film there is limited dialogue, it consists of Yul Brynner chasing Richard Benjamin’s character. Maybe a bit too long of a ‘chase’ scene, but Brynner simply walks stoically with his shining eyes (which we loved by the way). That combined with the music, does create quite a suspenseful feeling.

Benjamin actually has quite a few acting credits, but it seems that only a few were a success, including this role in Westworld. It seems he eventually became a bit more of a success with directing as he directed films such as The Money Pit and Made in America.

We thought he did a decent job with this character. He is comical at times when he is timid next to his friend John as they begin to explore the amusement park. Our host Sean in our podcast episode had to point out that his running (when running away from Yul Brynner’s character), was comical in itself as it looked like prancing/skipping.

We did not know who this was going into the film, but quickly found he is the father of Thanos, aka Josh Brolin. We were surprised to learn that James Brolin has quite a few television credits. He currently stars as a regular role in the show Life in Pieces with Colin Hanks. We’ll be honest and admit we really haven’t watched that series to comment on it.

In Westworld though, he seems as if he’s the rich and confident individual out of the pair of friends John and Peter. He may even be the one treating Peter to his time at Westworld? … unsure about that though. Ultimately, it does not turn out will for John, as Yul Brynner’s Gunslinger character shoots own John as the robots in the film become deadly violent towards to guests.

Other than the three above actors, there really aren’t any other actors and actresses to mention from this film. It was a relatively small cast for the movie, but it seems it was still enough to tell the story Michael Crichton wanted to tell. 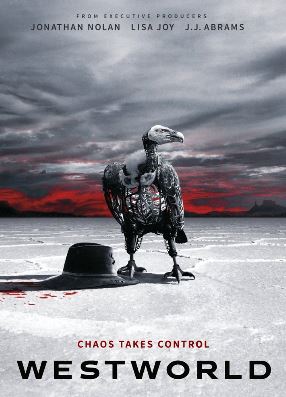 The show surprisingly retains quite a bit of components the movie introduced, but did change a few things.

Some of the similarities between the movie and show include two friends going to the Westworld amusement park experiencing adventures, or misadventures depending on how you look at it. In addition, the imagery of the internal operating system of the robots remains similar. Ed Harris’ character (the man in black) has some similarities to Brynner’s character (the gunslinger).

The biggest difference, which may be an obvious one, is that in the film there is little to no build-up to the ‘robot revolution.’ The audience gets a mention of some kind of virus that may have occurred with an upgrade. On the other hand in the show, the series creators have a whole season to build-up the story. That way characters are developed at a much higher rate than they were in the film, but it seems the show focuses a lot of character building with the robots where we get virtually none of that in the movie.

Westworld gets Force Fed Sci-Fi’s “Would Own” on our review and rating scale. For the time, this film did well, was considered a box office success, and the effects used are to be commended. The performance of Yul Brynner was great, despite limited dialogue. This film does seem like it got overlooked at the time of its release as sci-fi was a popular genre during the era. One criticism we do have is the length of the chase scene at the end and we would have liked to have gotten more details about the virus infecting the androids. However, it’s a great story by Crichton as it has been turned into a television series on HBO and it also likely influenced future robotic sci-fi films like The Terminator in our opinion.

How did you feel about the Westworld original movie from 1973? Do you think the HBO Westworld series does a nice job of retaining some of the main themes the movie had while telling a unique story? Do you think it was tacky Michael Crichton recycled the same idea of Westworld for Jurassic Park? Leave your questions, comments, and thoughts below and make sure to listen and subscribe to the podcast and listen to this week’s episode to hear Sean and Chris’ red shirt as well as what could amusement parks look like in the future?