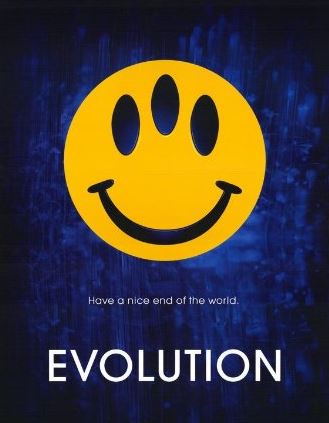 This week, join us as we discuss Evolution (2001 film)! Learn our thoughts (and criticisms) as we go over the Evolution film cast and characters, give our Evolution film review and rating, how wrong evolution is portrayed in the film Evolution, and more!

After a meteor crashes in the Arizona desert, two local scientists investigate the rock as it slowly becomes an alien encounter and the creatures that emerge begin to evolve immediately. Soon afterwards, the military takes over the crash site and the two scientists are joined by a military aide and a firefighter trainee to battle the aliens before they take over the world.

So, right off the bat, the film is oozing with science fiction. There’s a meteor crash, aliens, evolution (obviously), and government oversight. What more could a sci-fi fan want from this? A better movie would’ve been nice … more on that in a bit.

Directed by Ivan Reitman: Reitman is best known for directing comedies such as Animal House, Stripes and Ghostbusters, but we feel like he fell a bit short of his past work. It’s important to note the similarities between Evolution and Ghostbusters. There are four main characters, three are qualified to deal with their situation with a civilian tagalong, there’s military/government oversight and a battle involving a giant creature at the end of the film. If Reitman was going to go for a Ghostbusters sequel, maybe he just should’ve gone for that.

David Duchovny as Dr. Ira Kane: At this point in his career, Duchovny was well-known for his portrayal of Fox Mulder on the cult hit TV show, The X-Files, but much like Ivan Reitman, Duchovny seemed like he was phoning in his character. The only time he really emotes is when he’s trying to get to know or sleep with Julianne Moore’s character.

Julianne Moore as Allison: Thankfully Moore offers up a great performance compared to the rest of the actors she’s surrounded. She’s struggling to deal with her male military bosses and she’s often overruled during meetings until she works up the nerve to leave and join forces with Ira. She’s also dealing with her emotions toward Ira and her animosity to him eventually turns into a ham fisted romance.

Orlando Jones as Harry Block: While most of the comedy in this film comes from Jones’ delivery and performance, his character is certainly problematic while looking at it through today’s lens. He’s clearly using his position as a professor to potentially sleep with one of his female students, he uses his colleague’s computer to look at pornography and he cracks jokes about taking showers with his female volleyball players. As Chris points out in the podcast episode, if he were a real world person, there would a Sports Illustrated expose about how terrible he was.

Seann William Scott as Wayne Gray: Prior to starring in Evolution, Scott also starred in the teen comedy American Pie and he continued his line of playing goofy yet loveable characters and Wayne is no exception. While he’s a bit of a dope in here, he does come through in several dangerous situations and proves to be an essential part of this group.

Our Issues with Evolution

There was a lot our hosts pointed out as having problems with: Sean’s lens flare included portrayals of the education system along with the military. Several other glaring issues include problems with how quickly evolution was shown in the film. Simply put, evolution on a scale like this does not happen. Evolution, even on a grand scale, occurs over the course of millions of year and is not nearly as dramatic as going from flatworms to giant bug eating trees.

Chris’ lens flare includes the overacting and stunt casting of Dan Aykroyd as the Governor of Arizona. He definitely could’ve refined his performance a little bit and did not need to be as over the top as he performed. Most of the characters seem sex crazed and not overly concerned with just how grave their situation is becoming.

One of the main action sequences in the film is when the creatures evolve to the point of being able to breathe oxygen and also evolve to the point of being able to fly. One of the creatures breaks loose and attacks a local shopping mall and takes a shoplifter hostage to maybe eat at some point? Our heroes bust into the mall, steal some shotguns and save the day but at one point, they give up on looking for it! The mall can’t be that big and for them to give up so easily seems like lazy writing.

There weren’t a lot of kind things our hosts had to say about this wreck of a film. Sean gave Evolution our dishonorable “Would Erase from Memory” on our rating scale and would go on a crusade to spare the world from having to watch this film at any point. Chris went with a more straightforward “Would Not Watch” and commented that the technical aspects of the film like production design and visual effects often outshined the actors and the story at many points.

What did you think of Evolution? Did you dislike it as much as we did or did you find it charming and funny? Are the characters as problematic as we’re making them out to be? Make sure to listen to the full episode and find out who is the red shirt of the film! Finally, please subscribe so you never miss an episode and feel free to leave your comments and thoughts below!