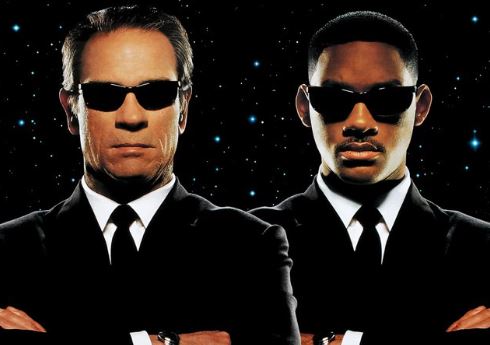 Let’s start with the…

Will Smith plays Agent J (Jay) in Men In Black (his previous identity being Edward James earlier in the film). As Sean and Chris discuss in this show’s podcast episode, Will Smith had just completed and ended his popular show The Fresh Prince of Bel-Air, starred in the smash blockbuster hit Independence Day, and then was cast and released in this film Men In Black. It’s kind of interesting as he finished the show and while he starred in the action film of Bad Boys first, he then cemented himself as kind of a sci-fi action star with Independence Day and Men In Black. We definitely don’t think it’s interesting in a bad way, but exactly the opposite as we think he did a phenomenal job taking up these types of roles (and still does). Sticking with Men In Black though, Smith did a great job! The mashup with Tommy Lee Jones’ character made the film funny and of course Will Smith delivers his one line jokes with ease as he usually does. We’ll get more into some of these jokes with our favorite Men In Black quotes later.

Tommy Lee Jones plays Agent K (Kay) in Men In Black. Jones had won an Oscar 4 years prior to the release of this film for his portrayal in The Fugitive (our non-sci-fi film recommendation of the week) and had filmed several films in between the two in the meantime. As we mentioned, the contrast of Jones’ and Smith’s characters was impeccable and added to the movie’s humor. Some people may not know that Clint Eastwood was considered for this role as well. While Sean and Chris think that you could trade Eastwood and Jones out on this week’s episode, I disagree and think Eastwood would have brought too much seriousness to the character of Agent K.

We also have in Men In Black, Zed who is portrayed by Rip Torn. We think Torn does a nice job playing the leader of the MIB agency in this film (and in the second one). We assume he wasn’t asked back for the third MIB movie due to his legal troubles though. Despite his past, he has had some great performances to go along with a long career.

Men In Black Creatures and Aliens

So we thought it would be fun to identify some of the Men In Black creatures and aliens we meet in the first film along with some of the actors who portray them:

Vincent D’Onofrio portrays the main villainous creature alien in this film. We never get the exact name of his species though! We get him referenced as “the bug,” “cockroach,” and as “Edgar,” which is really the body he stole as a disguise (poor Edgar? nah he was a jerk, haha!). In any case, D’Onofrio gives a great performance in this film while making himself move awkwardly at times since he really isn’t human, just disguised as one.

Tony Shalhoub portrays Jeebs, a creature alien who apparently can grow his head back? I want to know, can he grow as many back as he wants? Or does he have a limited amount?

We get see the Arquillians introduced in this film. Who are actually an important race involved in this storyline.

We see a Cephalapoid at the very beginning of the film blink two sets of eyelids (although the second turn out to be gills since he was out of breath? Uh…alrighty then). However, we quickly say ‘bye bye’ as he jumps off of a roof.

In this film we are introduced to the worm guys and Frank the pug. Like Edgar, we don’t really get a name for these alien creatures. I am glad we got a big more of these characters in the second MIB film, though. Hopefully we’ll get to talk about that in the future!

Discussing the Men In Black Ending

So there are two aspects toward the end that we want to discuss and do discuss in this week’s special podcast episode, other than how only one Mets outfielder saw the flying saucer.

One alternate ending to Men In Black included the concept
of agents Jay and Kay having a moral discussion with an animatronic version
of the big cockroach. Are you confused as we were when we found that out? I
hope so, otherwise you are … e’hem … **coughs** Lame! Kidding of course,
but in all honesty, come on! How boring of an ending would that be? What would
they even discuss? No, you need to have some type of battle in this situation
and in this type of film … we’re not watching Barney for crying out loud. Luckily,
the ending they kept fits perfectly.

So the very end includes a zoom out from New York and earth, all the way out from the Milky Way Galaxy. But then we exit the galaxy and see the galaxy what seems to be inside a marble. Then these marbles are being played with by aliens. Are you just asking … ‘What?’ ‘Why?’

We think it’s just more of a philosophical and scientific concept that the movie wanted to throw at its audience. Just remember how small we are in this massive universe!

When someone thinks of Men In Black quotes, really the most important and hilarious are Will Smith’s one-liner jokes.

From “It just be raining black people in New York” to “I’m sorry, was that your auntie?” Will Smith was indeed at his best when delivering laughs to the film’s audiences.

Here are some of our favorites from the first Men In Black film:

So, Chris and I agree on our highest rating here at Force Fed Sci-Fi of a “Would host viewing party.” Sean isn’t far behind though as he is almost rated it as high, but thinks he falls just short, so he rates it as a “Would own.” If he rated it any lower than that, I would have smacked him for all of you 😀

We rate it so high due to a few reasons. I think one of the most obvious is that Will Smith crushes his character and Men In Black would not be the same without him! D’uh! (If you disagree … metaphorical slap to your face). But also, after all of these years (22 years as of this post and podcast episode), it still holds up! You can sit down and watch it a few times per year, and laugh pretty much as you did the first few times you saw it! Other reasons this movie is great is the contrast between Jones’ character and Smith’s character and it contains a simple, but interesting story. Combine all of this, and you have a film that honestly … becomes a classic! Yes, we at Force Fed Sci-Fi do classify Men In Black as a classic Sci-Fi film!

So what do you think of Men In Black? Do you feel it can be classified as a classic sci-fi film? What is your favorite line from the film? Leave your thoughts and comments below and don’t forget to check out the full podcast episode!