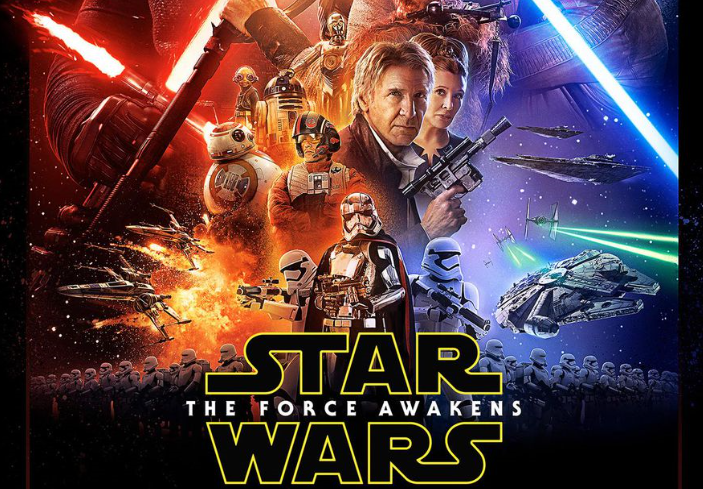 This time on Force Fed Sci-Fi, we are beginning our look into the Star Wars sequel films with Episode 7: The Force Awakens. Along the way we ask, is 30 years simply too long a time to simply resume the saga, how can someone like Kylo Ren have both daddy and granddaddy issues and how much nostalgia is too much? Let’s take our first steps and dive in as we discuss and review The Force Awakens …..

To properly begin the story of The Force Awakens, we have to go behind the scenes for a little bit and travel back to 2012 when Disney acquired LucasFilm. A hefty price tag of $4 billion for the acquisition and with that, the announcement of a new round of Star Wars films would be produced.

George Lucas, the creator of the Star Wars franchise, had actually developed ideas for a new round of films as far back as the 1980’s, but made the prequels first to round out the story that the original trilogy started. However, Lucas never got around to making Episodes 7, 8 or 9. Our hosts speculate that the effort of making the prequels and the backlash he was receiving for those in addition to the near constant changes he was adding to the original films probably didn’t motivate him to direct another film.

Following Disney’s major purchase, legendary producer Kathleen Kennedy was placed in charge of LucasFilm and tabbed JJ Abrams as the director for Episode 7 who quickly moved to say that Lucas’ ideas for the sequel films would not be used and they would proceed with their own creative group and ideas. There is much speculation as to why Abrams and Kennedy would go this route (probably Disney execs), but the bottom line is that Lucas had plenty of time to make those films and he simply chose not to do so.

Harrison Ford as Han Solo: Obviously Ford has had a great career outside of playing Solo, but he returns to the role that made him a star and is a bright spot for this film. Unfortunately, we are met with his death at the end. We won’t lie, it got us feeling sad as we see a beloved Star Wars character’s story come to an end, killed by his own son too!

Carrie Fischer as General Organa: Fischer returns to her legendary role and contributes to the reunion of the original trilogy cast. The years were not exactly kind to Fischer as she struggled with alcohol and drugs, but it should be noted that she publicly spoke about it, even in seminars, to bring awareness to alcoholism and addiction. We thank you Carrie!

Mark Hamill as Luke Skywalker: While Hamill has no lines of dialogue, his presence in the film serves as a McGuffin. Our hosts believe that he was not made a bigger part in the film as it would be distracting from the newer, younger actors (as it was we already had Solo and Leia taking attention away from the newcomers).

Anthony Daniels as C-3PO: It was nice to see him come back once again to reprise his role adding to the reunion of the original trilogy cast.

Daisy Ridley as Rey: Ridley’s major credits prior to being cast were several short films, but her performance helped launch her career as she’s since starred in films like Murder on the Orient Express, Ophelia and the Peter Rabbit series.

John Boyega as Finn: Our hosts have discussed Boyega in a prior film on the show, Attack the Block and we finally get to see him in a major blockbuster film!

Oscar Isaac as Poe Dameron: Isaac had filled up his resume with several minor roles prior to 2013 when he landed the lead in the Coen Brothers film Inside Llewyn Davis and like his counterparts, his career has only gone upward since the release of The Force Awakens.

Adam Driver as Kylo Ren/Ben Solo: Driver became a big name following his role on HBO’s Girls and finds himself in award bait type films seemingly every year. He’s a fantastic actor and adds a unique depth to the role of Kylo Ren, despite the criticism his character gets acting too much like an angry toddler.

It’s important to note The Force Awakens takes place 30 years after the events of Return of the Jedi. The Republic has been restored and the First Order has risen up to take the place of the Empire. Without getting into too much Star Wars history, the First Order battled the New Republic in a Cold War type existence with Leia Organa trying to warn the Senate about a coming threat from the First Order so she broke away to form the Resistance, an army capable of battling the First Order.

While all of this was happening, Luke Skywalker was trying to train a new generation of Jedi, but it all went wrong when an apprentice who we find out was Ben Solo, turned to the Dark Side, destroyed the Jedi Temple and killed the other apprentices. Following this, Luke has gone into hiding and no one has been able to find him.

In our opinion, we think that 30 years is simply too big of a time gap to simply pick up the story from the end of the previous film. Since Disney was a fan of the standalone films at the time, maybe it would’ve better served audiences by slowly introducing the new characters like Poe and the complex relationship between the New Republic and the First Order. If you attempt to research the First Order and the New Republic, you may find yourself going down rabbit holes of Star Wars history you may not want to find yourself going down.

To say there was backlash to The Force Awakens is an understatement.

Following the premiere of the first trailer a full year before the film was released, John Boyega received disparaging messages on social media as his character is a Stormtrooper who winds up defecting to the Resistance. This angered groups among the fan base who believe Boyega didn’t fit with their vision of the Star Wars universe. Boyega took the criticism in stride and told fans to simply get over it.

A lot of ire was also directed at Daisy Ridley who was forced to delete her social media following many derogatory comments following the release of the film. Given how both Boyega and Ridley turned in great performances, the criticism feels unwarranted. Star Wars fans have unfortunately developed a reputation as being a toxic fan base and for a more in-depth look at the state of the fan base, check out this great article from Esquire.

To the surprise of really no one, The Force Awakens was a massive box office success. In a day where billion dollar box office returns seem to becoming more commonplace, 2015 was the beginning of that trend and TFA blew away the competition that year. Here’s a quick list of box office records during its run:

Since Disney had to fork over $4 billion to acquire Star Wars and LucasFilm, the executives were probably breathing a big sigh of relief following the success of The Force Awakens.

Needless to say, we had some thoughts about The Force Awakens, but our podcast show hosts Sean and Chris were in agreement regarding the permeating feeling of nostalgia throughout the film. In many ways, it’s simply a rehashing of A New Hope with different characters and the plot point simply rearranged. Sean rated the film as a WOULD WATCH on the show’s unique scale while Chris rated the film as a WOULD OWN. While the nostalgia works for some portions of the film, it feels tired as the film doesn’t tread new ground. Maybe the prequels were better? That’s an argument we’ll save for another day.

Join us next time as we continue our look into the Star Wars films as we review The Last Jedi! What were your thoughts on The Force Awakens? Is Rey a Mary Sue? Do you wish Mark Hamill played a bigger part in the film? Please listen, rate, subscribe and enjoy our podcast shows too!