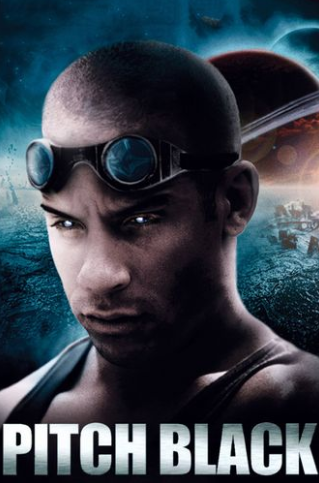 We enter Vin Diesel’s Riddick sci-fi movie franchise this week by reviewing and discussing the film Pitch Black. Along the way we will take a look at the Pitch Black movie cast, review some of the cheesy and funny Pitch Black movie quotes, and finally give our own Pitch Black review and rating. So shave your head and don those goggles (hopefully you really don’t do that), and strap in for a ride.

While Pitch Black has gained cult status and Twohy wrote the screenplay for the critically acclaimed film The Fugitive, there really hasn’t been much other success with his films whether it be directorial or writer. With that being said, overall Twohy did a nice job with this film, but we’ll get into our compliments a bit more with our review and rating at the end.

Vin Diesel as Richard B. Riddick

Don’t think anyone really refers to the character as Richard, but Vin Diesel’s portrayal of Riddick definitely reached a point of popularity with this film, especially among sci-fi movie fans. The character of Riddick in this movie introduces himself as someone along the lines of an anti-hero, we think, it’s a bit hard to describe, which is one reason we think audiences enjoy this film. 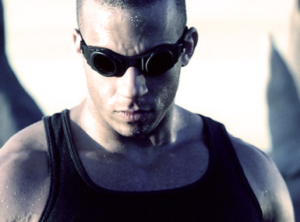 The arc of his character is definitely intriguing as the audience is introduced to him as a killer and former prisoner, but when he begins to work together with the stranded crew in the movie to try to survive the hungry aliens, Riddick towards the end shows a tiny amount of heroism. Instead of leaving the remaining survivors behind as he was about to do at the final scenes, he has a change of heart – something that isn’t evident at the beginning of the movie. While Vin Diesel is a well-known household name, let’s take a dive into his acting career for a second.

Really, another great character this film includes Mitchell’s Carolyn Fry. Towards the beginning of the film she is the pilot of the spaceship that crash-lands on the planet and almost ejects the cargo that holds passengers to save herself and one other crew member, Owens, but he stops her. This is the exact opposite of how she feels at the end of the movie as she tells Riddick she would sacrifice herself for the survivors who are trying to get off of the planet.

While Riddick and Fry have a more interesting character evolution throughout the film, Hauser is not what he turns out to be at the beginning either. Dressed and acting like a law enforcer, he turns out to be a bounty hunter. His selfishness in order to survive finally drives Riddick to lead him to his death eventually. We discussed in the podcast episode that Hauser is a bit typecast as well as he often ends up in an antagonist role, but he does a great job with those types of characters. 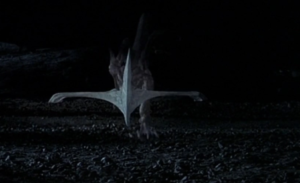 The name of the Pitch Black creatures, aliens, animals … whatever you want to call them, isn’t given in the film. However, they are labeled as ‘raptors’ for some odd reason that we couldn’t figure out. In any case, as the planet goes into a ‘pitch black’ eclipse (see what we did there), these ruthless creatures raid the surface of the planet the stranded passengers have landed on.

The design of them is actually impressively unique, almost like a land-dwelling, tailed animal with a hammerhead shark…head. Interestingly, it also seems as though they have vision that responds to movement and maybe a bit of sonar too? (they make sonar-like noise if you listen). Unfortunately, the computer graphics and animation that brought them to life were decent at the time of film’s release, but unfortunately these graphics and others in the movie have not aged as well as other films during this time.

There are definitely some funny and iconic quotes in this movie, we’ll just mention a few:

There were also some cheesy movie quotes, although, some of you out there may find them enjoyable:

Our podcast episode hosts Chris and Sean gave this a “Would Watch” and a “Would Host Viewing Party,” respectively, on our review and rating scale. Sean is impressed with the complexities the characters carry and their evolution, as well as how well this film was done and a reasonably low budget. However, Chris points out that while the graphics and animations may have passed for the time of its release, they did not age well. In addition, the sequels were of poor to average quality, which may bring down the value of this film and the character of Riddick. Despite that, this isn’t a bad film by all means, it is worth a watch and some sci-fi fans out there absolutely love this movie.

So what did you think of Pitch Black? Did you appreciate the complexity of these characters? If a 4th film is made, do you think it’ll do well? What are some of your favorite quotes? Make sure to listen to the podcast episode to find out who our unanimous red shirt is as well as a discussion on whether or not the deaths of most of the character are too gruesome. Don’t forget to subscribe to the podcast!