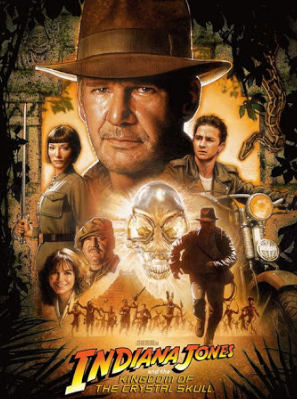 This time, we ‘Nuke the Fridge’ on Force Fed Sci-Fi with Indiana Jones and the Kingdom of the Crystal Skull and take a look at the film’s cast, the inclusion of an alien / inter-dimensional being, and the film’s ending along with other topics! So strap in and let’s whip away!

The Kingdom of the Crystal Skull Cast and Crew

Steven Spielberg – Director: The legendary Steven Spielberg returned for another directorial project within the Indiana Jones franchise with this film. We have to ask though, was this film the start of the downfall of Spielberg. Really since this film was released in 2008, we feel he’s only directed ‘good’ films and not any ‘great’ films, like The Adventures of Tintin, Lincoln, and Bridge of Spies. Where did films like Catch Me If You Can, Saving Private Ryan, Jurassic Park, and the original Indiana Jones films go? Our podcast host Chris almost thinks he just can’t outdo himself anymore and that other filmmakers have caught up with him. This is entirely possible, but we hope we get a film soon from Spielberg that once again blows us away.

Harrison Ford – Indiana Jones: Ford was in his 60’s at the time of the making and release of this film. It was obviously exciting to see him return to one of his roles that shot him up to the top of the list of A-list actors. We really don’t have issues with Ford’s performance in this film, but there are issues we will get to eventually later on. It was impressive to find out Ford performed most of his stunts considering his age, but not surprising since he really does cherish this role, and supposedly want this role to die with him … let’s be honest Harrison, Hollywood will eventually reboot the character because that’s the name of the game these days.

Cate Blanchett – Irina Spalko: We realized as we were recording our podcast episode, that Blanchett is an extremely talented actress and has the ability to play a wide range of different types of characters. She delivers a great performance as a Soviet agent and antagonist of the story with Spielberg, Labeouf, and Ford praising her performance and embodying such a unique character with unique characteristics.

Shia Labeouf – Mutt Williams: He was high on the actors-wanted list at the time due to his success with the Transformers franchise, but were his negative comments about this film what got him fired from the Transformers films? We don’t know for sure, but we speculate it probably was. In any case, Labeouf takes on this role as Mutt Williams, which we later find out is Jones’ son. A decent character in our eyes, but by no means an out-of-this-world character.

Karen Allen as Marion Ravenswood: It was admittedly exciting to see her take on the role again of Indy’s past love interest and mother to Labeouf’s character. However, we felt she was underutilized. Our podcast show host Sean felt she was just there to tell Indy he had a son, and then ended up just driving the boats and cars during the chase scenes … not much else as far as the purpose of her character goes though.

Ray Winstone as George “Mac” Michale: Winstone plays a character who used to work alongside Indy, but has allied himself with the Soviets. We’ll go into his fate during the film a little later, but not a very complex character who is blinded by greed and money, not to mention that he “tricks” the protagonists by saying he really is an agent infiltrating the Soviets, but pretty much says ‘just kidding’ later – was that part of his story really necessary?

John Hurt as Harold “Ox” Osley: Hurt plays an old friend to Indy and surrogate father to Mutt who, for pretty much the whole film, has gone ‘Coo-Coo for Co-Co Puffs’ after staring into the crystal skull. His character was enticing and intriguing a the beginning, but fits into the film in an odd way for the rest of the film with being an odd comedic relief at times.

Sean Connery was approached to reprise his role as Indy’s father, but apparently his role was going to be small and he had already retired from acting. Why come back to acting just for a small role and nostalgia purposes? We were with him on this one and completely support his decision on not wanting to return.

The Kingdom of the Crystal Skull Alien / Inter-dimensional Being

Granted, The Kingdom of the Crystal Skull alien is what leads to us classifying this film as “sci-fi,” but was this story line the right way to go for an Indiana Jones film?

For some reason, George Lucas was all about making a sci-fi-ish Indiana Jones movie. We really do wonder and ask, why does Lucas want some sort of sci-fi element in all of his films? Is he incapable of branching out at all? In any case, he finally convinced Spielberg to do such a film with this aspect included in the franchise.

Granted, it’s definitely different and adds a unique twist on actual history surrounding similarly found “alien” skulls (even though the elongated skulls are likely the result of genetics or cultural deformation), but we question whether or not this really fit the bill for an Indians Jones movie, and prefer the prior films’ more mythical take on history.

The Kingdom of the Crystal Skull Ending

Not only was the inclusion of an alien a bit bizarre for this film, but The Kingdom of the Crystal Skull ending was a bit bizarre itself.

Of course, it’s not surprising the main antagonist is killed by the very “weapon” she was seeking since this is an Indiana Jones film – and in this case it is believed that she was really after a successful way to implement psychological warfare. Upon returning the skull to the beings body(?), it offers the group an award, Blanchett’s character asks for all of the being’s knowledge, and somehow the knowledge is too much for her and results in disintegrating her. It may be just us, but this whole concept was a bit wacky and out-of-place.

In addition to Blanchett’s character dissolving and her henchmen being sucked into an inter-dimensional portal (oh yes, forgot about that oddity as well) … Winstone’s character Mac is still blinded by his greed wanting to collect valuable and historic objects that were discovered at the end as well. His character is faced with death / being sucked into the portal as well. Really? He could have easily escaped with the rest of the protagonists as there was plenty of time. He ends up being a character that the audience just kind of scratches their head at.

Despite the negative criticism of this film’s story line, it was the second highest grossing film of 2008 behind Christopher Nolan’s The Dark Knight. It ended up making about $780 million, well-exceeding it’s budget.

The film was not shown in Russia as it depicted Russia / Soviet Union in a negative way, although we don’t really see it that way, but that’s just our opinion.

There are plans for another Indiana Jones film, but there have been multiple writers trying to get the story right and apparently none of their ideas have panned out. There was skepticism that Labeouf was going to continue the story as Jones’ son. Whether or not that was the case at the time, that possibility has long passed as Labeouf has burnt his bridges with a few of the biggest Hollywood film-making executives, producers, and directors. Supposedly Harrison Ford will return for a 5th installment if it ever gets off the ground, but we will have to wait to see if this is what end up happening in the end.

Our hosts differed with this film and their final ratings. Sean gave this film a ‘Would Watch’ on our rating scale, noting that while the film lacks any real character growth and at times displaying sub-par dialogue, it is still a fun adventurous film with Harrison Ford embodying his well-known character of Indy Jones. On the other hand, and in a surprising fashion, Chris rates this film as a ‘Would Not Watch.’ He strongly feels the story of an alien / inter-dimensional being does not belong anywhere near the character of Indiana Jones, unfortunately. All-in-all, while there is adventure, it is a bit of a misplaced film within such an iconic franchise.

So what did you think of this entry into the Indiana Jones film franchise? Do you think a 5th film will do better if it ever gets made? Leave your thoughts and comments below. And as always, rate and subscribe to our podcast show! Until next time folks!