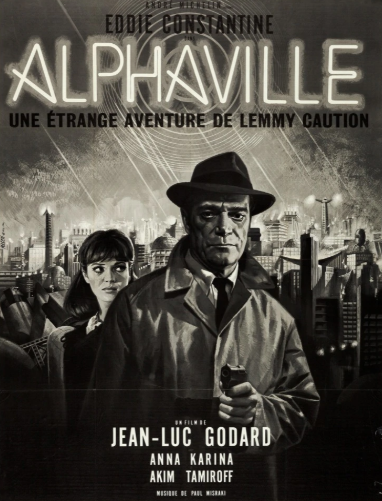 This time, we’re diving into French cinema and reviewing the 1965 neo-noir, thriller Alphaville and along the way we ask, is this film just ripping off the works of George Orwell and Aldous Huxley, who exactly is Lemmy Caution, why does he look so haggard, and is there hope for an English language remake? Let’s dig in….

Directed by Jean-Luc Godard: If that name doesn’t sound familiar to you, don’t worry since it wasn’t familiar to us either, but after doing some digging into his career, we discovered he’s one of the most influential filmmakers in French cinema and pioneered the New Wave style of film making during the 1960’s and 1970’s. While he exclusively made films in France, directors like Martin Scorsese, Quentin Tarantino, Brian De Palma and Steven Soderbergh have cited Godard as an influence on their respective styles of directing. He was also awarded an Honorary Oscar in 2010 due to his contributions to the world of cinema.

Eddie Constantine as Lemmy Caution: You may be noticing a trend of naming people you may not have heard of before, but Constantine is considered one of the legends of French cinema. Constantine was a well-traveled individual before he wound up in France – born in Los Angeles and emigrating to Vienna in order to jump start a singing career, but returned to America when that career path didn’t yield results. He then returned to Europe when the only acting parts he could get in Hollywood were minor roles and began performing in cabarets where he was discovered by legendary French singer, Edith Piaf and he helped her break into English markets. The character of Lemmy Caution became his signature role after this discovery, but more on that later.

Anna Karina as Natacha Von Braun: At the time Alphaville was being filmed, Karina and Goddard were married and they continued to work together even after they divorced. Karina is also a legend of French cinema and continued appearing in films as recently as 2008. She also became known as a director, model, singer and writer during her iconic career.

Who is Lemmy Caution?

Alphaville doesn’t address this question until almost 50 minutes into the story, but as our podcast show hosts point out, the film really begins to move after this revelation.

We’re introduced to Caution as a journalist named Ivan Johnson, but it’s not clear if he’s there looking for a story or just on holiday. It becomes obvious that he’s not really a journalist when he pulls out a handgun and begins shooting at an intruder in his hotel room. Lemmy’s real mission is to investigate the city of Alphaville and either destroy the malevolent computer that controls the city, Alpha 60 or to assassinate the creator of Alpha 60, Professor von Braun.

The Alpha 60 entity does appear in the film, but as a disembodied gravelly voice that offers vague philosophy as it tries to control its population. Caution’s pursuit of Professor von Braun becomes complicated when he falls in love with von Braun’s daughter, Natacha, and his mission gains additional objectives as he now has to save her from Alphaville’s imminent destruction.

Following World War II, American culture was heavily promoted in France and the population formed an attachment to the American liberators from Nazi occupation. French film producers began to mine for material that would appeal to audiences – Caution became an obvious answer to adapt for the big screen.

Constantine would go on to appear as the character in many films beginning in the mid 1950’s to the late 1980’s, but Alphaville was a polarizing film at the time of release as fans had associated the character of Caution with optimistic stories and the ability to overcome almost insurmountable odds to win the day.

His portrayal in Alphaville shows a beaten down, elderly and haggard looking man. This is partly due to the tone of the film and the fact that Godard would not allow Constantine to wear makeup in scenes where Constantine was shot harshly in direct light.

What Happens in Alphaville?

As mentioned earlier, Alphaville is a city that is ruled by a computer and while our podcast hosts debated as to whether this would be a practical application for a computer in the real world, it breaks in a bad way for this film.

For starters, Alpha 60 has outlawed any sort of independent thought and concepts such as love, poetry and emotion and anyone who shows an affinity for poetry and displays any emotion is rounded up and summarily executed via an elaborate ceremony that takes place in a swimming pool.

In one of the more disturbing scenes in the film, a group of people are placed on a ledge, allowed a final sentence before they are shot in the legs and dropped in a pool. As if this wasn’t enough, a group of women then dive into the pool carrying knives and finish the ceremony in brutal fashion.

Admittedly, the film borrows many aspects from legendary dystopian novels such as 1984 by George Orwell and Brave New World by Aldous Huxley. The idea of “Newspeak” from 1984 is reflected later in the film by having an edited dictionary delivered to Caution’s hotel room that no longer contains words like “love” or “why” as the words have simply been eliminated from the vocabulary by Alpha 60.

If you pay attention during Alphaville, you may notice that many of its citizens are taking pills which, are reminiscent of the drug Soma from Brave New World. While Brave New World was published in 1932 and 1984 in 1949, it’s not difficult to see how those novels could have influenced films that came out after those releases.

In order to destroy Alpha 60, Caution provides a riddle to the computer that it is incapable of solving and in doing so, begins to incapacitate the citizens of Alphaville. He is able to save Natacha and takes her away from the city to begin their new life together. Our show’s host Chris speculated that the citizens were affected because Alpha 60 may have implanted some type of computer chip into their brain since that would explain why Caution wasn’t affected yet everyone else was. No explanation was given for this since the film shot mostly without a screenplay. A script was written prior to production in order to secure funding, but once those who backed and financed the film found out that none of the script was included in the final cut and they demanded their money be returned.

Our hosts differed slightly in their opinion of Alphaville with Sean giving a rating of WOULD OWN on our unique scale while Chris gave a rating of WOULD WATCH. Sean cited the silliness of the film adds some joy to the experience while the film is slow to develop and doesn’t move along until after Caution is captured by Alpha 60. Chris cited his own personal issues with watching foreign films, but admitted that he is trying to be more open to watching foreign films. It’s also easy to see this film’s influences in future dystopian films like Blade Runner and Minority Report and should be on the list of any science fiction fan.

What did you think of Alphaville? Did the execution scene bother you? Were you able to follow this film’s complicated plot? Tune in to our episode to hear our picks for Red Shirts and Lens Flare and to hear Chris explain why he would be kicked out of France if he were ever allowed to visit the country.

Please listen and rate our podcast and if you’d like, please leave us a review! It really helps people find the show!

Next time, we’re taking a look at the fledgling Schwarzenegger action piece The Sixth Day! Please watch and enjoy with us!