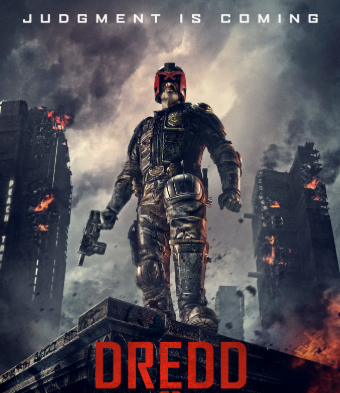 This time, we’re taking a look at the cult film Dredd (2012 movie) and along the way we ask, how does this film compare to the original film from 1995, how can a character thrive with little to no emotional development and just how badass is Ma-Ma? Let’s dive in….

Directed by Pete Travis: Travis’ primary credit before Dredd was the 2008 assassination drama Vantage Point and has not done too much since this film wrapped up with the exception being a History Channel miniseries Project Blue Book.

Written and Produced by Alex Garland: Garland has become a new voice in the sci-fi genre having previously written films like 28 Days Later, Sunshine and Never Let Me Go as well as directing Ex Machina and Annihilation as well as the recent F/X series Devs. There were reports in post-production that Garland took over the editing process from Travis with Travis supposedly being alright with this arrangement. This may suggest that Garland was more hands on during filming than previously believed, with star Karl Urban even suggesting in 2018 that Dredd should be considered Garland’s directorial debut and not Ex Machina.

Starring Karl Urban as Judge Dredd: It’s hard to imagine Karl Urban being a lead actor in a solo film, but that’s only because he’s been in so many great ensemble films like Star Trek, The Lord of the Rings and Red. He’s also appeared in films like Doom, The Bourne Supremacy and The Chronicles of Riddick, as well as an appearance in the Marvel Cinematic Universe while appearing as Skurge in Thor: Ragnarok.

Olivia Thirlby as Anderson: Thirlby’s breakthrough came in 2007 after appearing in the off-beat comedy Juno, but has since gone on to appear in No Strings Attached and Chappaquiddick; although, she doesn’t have many widely known credits to her name.

Lena Heady as Ma-Ma: Heady has been a mainstay in cinema and television for almost 30 years now, but is best known for her appearances in films like 300, The Purge and Fighting with My Family as well as being part of the main cast of Game of Thrones for nearly the entirety of the show – if you’ve watched it, you’ll understand that’s quite an achievement.

Wood Harris as Kay: Harris got his start in the beloved Disney/Sports film Remember the Titans, but has also displayed his range in projects like The Wire, Ant-Man, Creed and Blade Runner 2049. In Dredd, we get to see him play off of the character of Anderson for most of the film.

Domhnall Gleeson as Techie: Gleeson’s character doesn’t have a name in the film, but it’s clear that he’s been suffering at the hands of Ma-Ma for years prior to the events shown. Gleeson himself has come up other times in our podcast (listen to our episodes on the Star Wars sequel trilogy as we touch on him playing General Hux) and has proven in recent years that he’s an incredibly talented actor

The character of Judge Dredd has a pretty unique history after beginning life as a comic character. The character was created as part of British sci-fi comic, 2000 A.D., that debuted in March 1977. While the character hasn’t evolved too much over the past 40 years, Dredd has found himself in unique storylines such as Dredd coming back as a zombie to judge criminals as well as venturing beyond the wall to combat gangs of mutant nomads. Judge Dredd has remained 2000 A.D.’s most popular character and even received a film adaptation in 1995 starring Sylvester Stallone.

Another issue is the film’s rating of PG-13 in spite of the comic’s reputation as being breathtakingly violent and bloody. While the original intention of the film was to obtain a R rating and was even edited several times to appease the MPAA, Stallone pressured the studio to edit it even more to obtain that PG-13 rating. The final issue was the film’s budget.

In 1995, the film was budgeted for $95 million which was and is, an insane of amount of money for a film. For context, $95 million in 1995 is about the same as $157 million in today’s currency value. This large budget in the mid 90’s made it next to impossible for the film to be profitable as it only made $113 million during its theatrical run.

In contemporary interviews, Stallone has stated that the direction of the film wasn’t immediately clear to him despite his self-proclaimed love of the original source material. However, there are also numerous reports of Stallone working with the studio to make the film more of an action/comedy instead of the dark and violent version of the comic.

Judge Dredd has been consistently rated as one of the worst films ever made and remains the biggest flop of Stallone’s career. Needless to say, the lack of success with this film made Hollywood hesitant to produce a new film for almost 15 years until Alex Garland and Pete Travis entered the picture and began developing the film that would release in 2012.

The film Dredd is filled with characters who play off of each other in various interesting ways. However, Judge Dredd is really not one of them. While he does interact with all of the other characters at one point in the film, he doesn’t undergo any sort of major arc or change by the time the film has ended. The majority of the development is transferred to Anderson as it’s revealed she has developed telepathic abilities after growing up near the irradiated zone beyond the wall.

She’s able to see people’s true motives as she makes arrests and struggles with the morality to carry out sentences on those criminals. The best interactions in the film are those between Ma-Ma’s henchman Kay and Anderson, as she continues to look into his mind and is spooked by what she sees. Anderson’s ability also enables her to have empathy with those criminals she is busting with Dredd.

In Dredd’s world, everything is black and white; you’re either a criminal or a complete innocent with no middle ground. By the end of the film, she’s able to impart some of the empathy to Dredd as he grants her a passing grade and allows her to become a Judge.

In the middle of all of this, is the conflict between Dredd and Ma-Ma. From the beginning of the film, we see that Judge Dredd will do whatever he can to accomplish his mission and punish the criminals. On the other side, we see Ma-Ma being ruthless and throwing people off balconies and coldly calculating her next move to try and eliminate the Judges.

It’s almost like watching Batman and Joker go at each other and in one particular scene, Ma-Ma lines up three heavy machine guns to try and kill Dredd, but fails to do so only to see Dredd emerge through the smoke and toss one of her henchmen down the massive shaft of the slum skyscrapers.

In addition, Ma-Ma uses a Hail Mary and brings in a group of corrupt Judges who have taken a bribe to try and kill Dredd and Anderson. In one the best scenes in the film, Dredd faces down against two of the corrupt Judges as we think that these corrupted individuals have gained the upper hand on Dredd until Anderson arrives and saves him from certain death. At the end, Dredd goes back to work and resumes his daily task of cleaning up Mega City 1.

The setting of Dredd is the massive city appropriately titled Mega City 1, which has emerged from some sort of nuclear fallout that has wiped out the United States. It’s not clear if the nuclear fallout was caused by an accident of nuclear war, but the former United States has been condensed into these massive mega cities. The roles of police officers, prosecutors and judges have been consolidated into one and they dispense justice at a moment’s notice.

Normally in post-apocalyptic films, we see a complete breakdown at society and meager attempts to reorganize, but not only do we see a rebuilt society, we see a complete reorganization of it that has become desensitized to violence and death as automated robots come out to clean up dead bodies for recycling.

These Mega Cities are not great places to live as we hear that unemployment is at the unfathomable rate of 96% as well as obvious rampant crime that the Judges are powerless to completely eradicate. Dredd even remarks that one in every five rookie Judges are killed on their first day, which leads us to wonder what the death rate is like for Judges overall. The nuclear fallout has also led to mutations in the population like we see in Anderson, but in the comic there are also mutants that have grown additional limbs or constantly live with decaying flesh.

Dredd and Anderson also have to contend with a drug that’s growing in popularity, Slo-Mo, a drug that slows down time for the user. While the visual effects are great to look at on-screen as they’re not overused, they also lend to a distracting element of enhancing certain violence.

Despite the positive reviews from critics and fans, Dredd has not received a sequel and it’s more and more unlikely that one will be made. We found this perplexing as they found through their research that most of the film’s budget was made up in distribution deals as well as earning an additional $20 million in home media releases.

A lot of factors went into the film’s lack of success, such as the fact that 2012 was a loaded year for films such as The Avengers, The Dark Knight Rises and Skyfall. So it’s possible that audiences simply suffered from blockbuster fatigue, or the more  likely explanation is that audiences simply didn’t know about it as many of those involved in the film, including Karl Urban, have noted that the studio didn’t devote resources into marketing and promoting the film.

Since Dredd’s release in 2012, there have been rumors since of a series that could be developed for a streaming service with Karl Urban repeating numerous times that he would be onboard for a series, but the latest was in 2017 with Amazon developing a series. However, there has been no news since then and Urban subsequently moving on to other projects.

We mentioned on our podcast episode that the premise of Dredd could lend itself to a video game that places players in the shoes of Dredd or another Judge as they combat crime in Mega City 1, would you play that video game?

On our unique scale for Force Fed Sci-Fi, our podcast hosts were once again in agreement with their rating by calling Dredd a WOULD HOST A VIEWING PARTY with both Sean and Chris citing the interesting characters, over the top action and rich world as the main standouts to the film. Now we’ll just see who shows up to that party in full Judge Dredd cosplay.

What did you think of Dredd? Do you agree with our rating? Listen to our full episode to find out our choices of Red Shirts and Lens Flares as well as our thoughts as to whether Dredd or Anderson has the better post Judge life?

Please listen and subscribe to the podcast and please leave us a five star on your podcast player of choice as it helps other listeners find the show. Tune in next time as we continue reviewing Ethan Hawke films as we review Daybreakers!