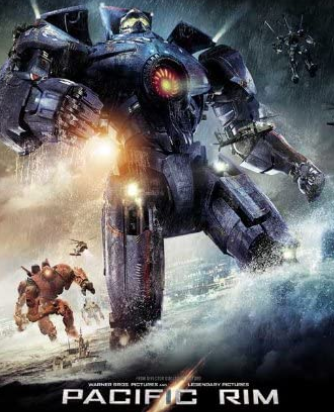 This time, we we look at the 2013 sleeper hit with our Pacific Rim film review, and along the way we ask if the giant Jaegers are actually possible? Does Ron Perlman play the best character in the film? Finally, we examine Pacific Rim’s complicated legacy. Let’s dive in…

The Odd Journey to Pacific Rim

The production of Pacific Rim actually began in 2006 when screenwriter Travis Beacham conceived of a film where giant robots battled giant monsters. While basic, the concept evolved over the next several years until he had a 25 page treatment. Then, in 2010, Guillermo del Toro was announced to be directing the aforementioned H.P. Lovecraft film, but this project was ultimately cancelled after del Toro was unwilling to compromise on the film’s budget as well as the eventual “R” rating for that film. Following that cancellation, del Toro partnered with Beacham to continue working on the script for the next year.

Finally, in 2012, del Toro and his team were able to begin shooting and the schedule was hectic to say the least. Del Toro is notorious for the control he exerts over his productions. He often does not employ a second unit to shoot scenes that do not include principal actors or prominent scenes, but due to a condensed shooting schedule, he had no choice but to utilize a creative scheme to get his movie completed.

He decided to use what he called a “splinter unit” that would arrive on set prior to the main schedule that included several actors and crew members and they would work on off days in the production. Del Toro also worked eighteen hours per day as well as encouraged improvisation and looser movements.

When Can We Get a Jaeger?

Obviously, the literal big technology on display in Pacific Rim is that of the Jaegers, the gigantic twin piloted robots that have been built to battle the monstrous Kaiju that are emerging from the Pacific Ocean. Is the technology currently available to develop these giant robots? In short, no and there are very compelling reasons why it’s not.

For starters, the sheer size of the Jaegers. Just because something is bigger, doesn’t mean that it’s better. The amount of energy needed to move these robots would be staggering and would actually be weaker than say a robot of regular human proportions.

In addition, there aren’t any materials that are strong enough to create the ultra-tough Jaegers. Some potential building materials could be titanic or carbon reinforced plastic or even beryllium, but the metal is toxic to humans and there’s also the weight of these materials to consider.

As mentioned earlier, the energy required to power these Jaegers simply doesn’t exist right now. Conventional gasoline could work to power the Jaegers, but would only help them move about 50 feet before running out and requiring more fuel.

There’s also the matter of programming these robots. Even though they’re piloted by humans, the robot would still require the programming for how to move their arms and legs. Humans don’t require this sort of complex programming thanks to the nervous system. No one consciously thinks about moving their arms or legs when they have to run, it just happens, but this wouldn’t naturally occur in a robot.

As cool as the Jaegers appear on screen, they are still a long way off from even being remotely possible in our
world.

In spite of the positive critical reception, it didn’t translate to box office success. Against the film’s huge budget of nearly $200 million, Pacific Rim only managed to gross $411 million at the worldwide box office. What’s interesting to note about that $411 million is that over $300 million of it was achieved at international theaters and just over $100 million came from the North American box office.

It faced stiff competition during its release from other films and it probably didn’t help that this film was mistaken for another Transformers film.

Even though the film had a stellar cast, they haven’t been up to much these days. Sons of Anarchy ended its run in 2014. Charlie Day is still going strong on It’s Always Sunny in Philadelphia. Idris Elba decided to have a disastrous run at the musical Cats. Finally, Rinko Kikuchi had a poorly received film in 47 Ronin. Guillermo del Toro has managed to find additional success following his releases Crimson Peak and The Shape of Water. It’s difficult to say whether or not Pacific Rim contributed to the downturn in these actors’ respective careers, but it’s something that is hard to ignore.

What doesn’t help the original film’s legacy is the horrendous sequel that released in 2018 to critical ratings and a poor box office. That film labored in developmental hell for several years before proceeding, but went ahead without the involvement of Guillermo del Toro and the majority of the principal cast from the original film.

There were plans for an anime series to premiere on Netflix, but there have been no updates on this series as of 2018.

While Pacific Rim passes the Bechdel Test in terms of having female representation, it fails its own test in terms of how those female characters are presented to its audience.

What did you think of Pacific Rim? Listen to our full episode to find out our choices of Red Shirts, Lens Flares and our rating. Let us know if you’ve developed your own test for evaluating representation in film and tune in next time when we discuss Sky Captain and the World of Tomorrow. Please listen, rate and subscribe to the show in your favorite podcast app!