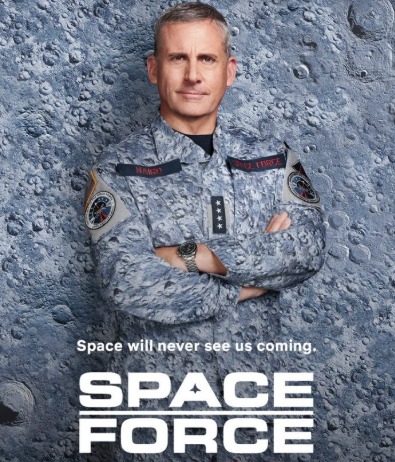 This time, the Force Fed Sci-Fi team binged so we could bring you our own Netflix’s Space Force review and rating. While watching the latest Netflix comedy Space Force we asked ourselves how is Mark Naird different from Michael Scott, is John Malkovich the new everyman of Hollywood and did Netflix somehow defeat the US Government? Let’s dive in….

–Steve Carell as General Mark Naird: Carell has made his career in comedy after a long stint as lead character Michael Scott on the US version of The Office and in roles in films like Anchorman, The Forty Year Old Virgin, Get Smart and Crazy, Stupid, Love. Carell is also credited as a creator and executive producer on Space Force along with co-creator Greg Daniels, who also created the US version of The Office.

There are noted similarities between the former show and Space Force, especially the use of a single camera, the deadpan comedy and various workplace hijinks. As Chris and Sean note during our podcast episode, Carell’s performance as Naird is more believable than Michael Scott as a General Naird-like individual that can be found in just about every workplace imaginable.

–John Malkovich as Dr. Adrian Mallory: Malkovich’s film career extends back to the late 1970’s and has appeared in films like Empire of the Sun, Of Mice and Men, Being John Malkovich, Burn After Reading, Secretariat and RED. In recent years, he’s developed a reputation of portraying manic characters like in RED where he plays a paranoid, ex-CIA assassin who’s convinced of a major conspiracy to eliminate him and his former colleagues. In spite of his stellar resume, he has yet to receive an Academy Award for his efforts, but hopefully that may change in the next several years.

He’s truly able to show off his range with the character of Dr. Mallory in Space Force as we see him and Naird have a lot of friction due to Mallory being a true scientist and Naird being military. However, in the end, they have truly tender moments among being colleagues / friends.

While the Space Force as we know it gained traction in late 2019, its actual history extends back to 1982 when it was known as the Air Force Space Command and its mission didn’t exactly have war-like objectives. They were primarily responsible for launching satellites, ensuring the friendly use of space, weather forecasting, missile warning and navigation.

This was originally a division within the United States Air Force and not its own separate branch as we now know it to be. The Air Force Space Command was dissolved on December 20, 2019 with the signing of the National Defense Authorization Act for 2020 and was formed into its own branch that became simply known as Space Force.

The mission of the new Space Force is wildly different from that of its predecessor. Its primary missions include space superiority, domain awareness, control of space, missile warning and defense and nuclear command. In essence, this branch is responsible for the militarization of space in spite of the International Space Treaty that discourages nations from utilizing space for these purposes.

While its first mission was successful in March 2020, it remains unclear what the future of the Space Force will look like and how they could shape future battlefields.

Obviously, Netflix’s Space Force is inspired by the real world decision to create a new branch of the military along with the sometimes farcical quality of the Presidential administration. There are many allusions to POTUS, but he is never directly named along with POTUS’ propensity to tweet about anything and everything. Even the First Lady is not safe as her fashion sensibility is dragged in one episode when she wants to design the uniforms for Space Force. Even actual figures within the Senate and Congress are lampooned as caricatures including Chuck Schumer, Nancy Pelosi and Alexandra Ocasio-Cortez in a few of the episodes.

In some of the more comical scenes of the show, several meetings of the Joint Chiefs occur with some comedy and acting giants like Jane Lynch, Patrick Warburton, Noah Emmerich, Diedrich Bader and Larry Joe Campbell portraying various heads of their respective military branches. There’s some dunking on the Coast Guard, infighting between the Air Force and Space Force, some incompetence in the Army, cluelessness in the Marine Corps and wonder in the Navy. Since our very own podcaster Sean is a member of the National Guard, he mentioned that most of the other branches actually do pick on the Air Force (they get the most funding; therefore, they get made fun of for having a cushy lifestyle). Of course we at Force Fed Sci-Fi still appreciate all branches of the military and those who serve.

Even social media isn’t safe as the social media coordinator of Space Force, F. Tony Scarapiducci, is constantly seen as annoying General Naird and only wanting pictures for the sake of photo opportunities. In an episode of the second half of the season, a satirical version of Silicon Valley grifter Elizabeth Holmes is introduced trying to hawk a “skinny fuel” that burns clean and something that POTUS hopes to utilize in launching its rockets. If you are up on current events, you’ll be able to spot all of the little satirical moments that seem to be hidden throughout the show.

When Netflix announced the creation of development of their latest show, they immediately filed for trademarks and copyrights in various countries beginning in January 2019. The actual Space Force wasn’t created until December 2019 and their application for the trademark to that name is still pending.

The Department of Defense, the government organization tasked with overseeing all the branches of the military, has gained a reputation of scooping up various names associated with the military such as Navy, Navy SEAL, Army and others. So for now, it seems like the streaming giant was able to get one over on the United States’ Government.

While it’s unlikely that the government will take Netflix to court over the rights to secure the trademark without wandering into a First Amendment issue, the law does allow for the use of parody and satire; therefore, the show is safe from the ire of the government for now.

Surprisingly, the show has not come under the ire of the President given his desire for tweeting about anything that may bother him at any given moment.

Our Own Netflix’s Space Force Review and Rating: Will There be a Season 2?

While our hosts enjoyed Space Force with Sean rating it a WOULD HOST A STREAMING PARTY and Chris rating it a WOULD STREAM, other critics did not receive the show very well. It currently holds a “Rotten” rating on Rotten Tomatoes as well as a subpar score on Metacritic of 48. Many critics have cited the series potential for greatness, but noted that the humor is hit or miss and very lackluster overall. Given the poor ratings and no announcement, it seems unlikely that we’ll be treated to another season of Space Force.

What did you think of Space Force? Tune in to our episode to hear our Lens Flares as well as our choice of Red Shirts and yes, there is death in the show even if it is in the service of comedy. Please listen, rate and subscribe to the show and tune in next time as our hosts cover the 2018 thriller A Quiet Place!