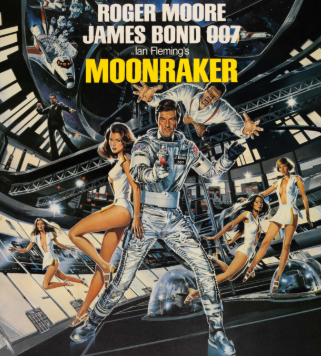 This time, we’re doing a Moonraker movie review by taking a journey with Her Majesty’s Secret Service and James Bond. We were also joined by special guest Colin Hope in our podcast episode and we asked, would James Bond make a decent astronaut? Is Hugo Drax a precursor to billionaire villains like Gordon Gekko? and how does the James Bond franchise manage to be a cultural zeitgeist time and time again? Let’s dig in on this edition of Force Fed Sci-Fi!

Directed by Lewis Gilbert: Prior to directing Moonraker, Gilbert had already helmed two Bond films with You Only Live Twice and The Spy Who Loved Me so, he was no stranger to the franchise and certainly brought the unique flair the 1970’s required of Bond films.

Roger Moore as James Bond: This was the actor’s fourth Bond film following the previously mentioned The Spy Who Loved Me. His films have since gained the reputation as being the weirdest and wackiest in the series. There are numerous gags that are more for laughs than thrills and Moonraker was no exception.

Michael Lonsdale as Hugo Drax: While Lonsdale is more known as an actor in the French cinema, he plays a maniacal billionaire with aspirations of world colonization and eugenics, but for most of the film, he spends his time posturing against 007. From lavish meals to playing an automatic piano and surrounding himself with beautiful women, Drax is someone who wants to be like Bond and will go to every length to fulfill that wish.

Lois Chiles as Dr. Holly Goodhead: While Chiles does an admirable job playing Bond’s CIA equivalent, she’s often discounted in the film simply because she is a woman, even though she proves herself more knowledgeable about space travel than 007. Chiles has gone on to distance herself from her portrayal of Dr. Goodhead citing that it’s impossible to live up to people’s fantasies.

Richard Kiel as Jaws: Reprising his role from The Spy Who Loved Me, Kiel is actually given a romantic storyline involving a woman of his complete opposite after the producers received letters suggesting the villain become a hero after the character resonated with children.

Numerous other veterans from the Bond series reprise their respective roles like:

It Wasn’t Supposed to Be This Way….

If you’re familiar with the early James Bond films, the credits would often contain the line of “James Bond will return in [INSERT NEXT MOVIE]” and the film that preceded Moonraker was no exception with the next film in the series slated to be For Your Eyes Only, but obviously, this did not happen thanks to a little film called Star Wars.

Following the release of the blockbuster in 1977, the Bond producers accelerated their original plan of making Moonraker sometime in the 1980’s to 1979 as it became clear that audiences wanted to see space adventures on the big screen. It’s the first film on Force Fed Sci-Fi that was made in direct response to another film. While For Your Eyes Only would still be released in 1981, moving Moonraker up in the production schedule certainly added unique challenges. The budget for the film was slated for $34 million which was the most expensive Bond film at the time and twice as much as The Spy Who Loved Me.

The series is noted for its massive production design and globetrotting adventures, but the legendary spy going to space may not have been as complex as you’d think. To pull off the look of the massive space station for the film’s climax, the special effects team built an impressive miniature that they would blow apart with shotguns to simulate the station being destroyed.

While the zero gravity scenes now seem hokey with other space films like Apollo 13 and Ad Astra pioneering new ways to showcase actors in the zero gravity vacuum of space, they were still impressive at the time and one of the scenes even contains the most zero gravity wires ever used in a film. The opening for the film required weeks of planning by the stunt workers and was filmed over the course of 88 jumps!

As Chris points out in the episode, many aspects of the film seem more to be a rehash of plot points and sequences from The Spy Who Loved Me but taken with a more lighter tone. As The Spy Who Loved Me was dark for the time, Moonraker takes a lighthearted stab and takes the franchise in a new direction. While the film has its intense moments like with Bond being trapped in a centrifuge, there is also Bond escaping Drax’s thugs through the canals of Venice featuring a double-taking pigeon. It even takes on a self-aware attitude as there are nods to 2001: A Space Odyssey and Close Encounters of the Third Kind.

Could All Spy Films be Science Fiction?

This is a question our podcast hosts posed to Colin Hope, that spy films are unique as they are released during times of changing technology. Moonraker came out when NASA’s space shuttle program was in its infancy and the Bond franchise has continued to evolve as technology is changing with recent films like Skyfall and Spectre involving computer hackers as villains.

The franchise has been in on technology since the beginning with the first film, Dr. No, involves a villain whose goal is to topple satellites and start a World War. On the other hand, the other films are more traditional espionage tales such as From Russia with Love, Live and Let Die and License to Kill.

Technology and espionage aren’t exclusive to the Bond films. The Mission Impossible series seems to always
include some new technology or a tech-savvy villain set on killing Tom Cruise and in spite of Jason Bourne’s lack of tech savvy, he finds himself besting villains the old fashioned way time and time again.

While addressing if all espionage films could be viewed as science fiction, it’s hard to determine a definitive answer. While many spy films utilize many technology as their primary means of villainy or even catching villains, they are not built around those concepts; they are simply a means to an end. It’s the same issue regarding films with the Marvel Cinematic Universe, while those films contain sci-fi elements, they do not
lean hard into those elements with several exceptions like the Ant-Man and the Iron Man films.

Sean and special guest gave Moonraker our coveted rating of WOULD HOST A VIEWING PARTY – it’s a fun space romp while throwing James Bond in the mix was a welcome addition. Chris differed slightly in his opinion, initially rating the film as WOULD NOT WATCH for the fact that the sci-fi elements in the film are simply wrong, but as a Bond film, he rated it as WOULD HOST A VIEWING PARTY. Our hosts and special
guest were not terribly divided on their rating, but maybe Chris can learn to lighten up while Colin and Sean host a Moonraker viewing party.

So what did you think of Moonraker? Is it the wackiest Bond film in the series? Are the gags too much or is it a great mix of humor and action? Listen to the full episode to find out what our favorite moments from the movie were and what our favorite films are from the Bond franchise as a whole. Finally, we contemplate a few ideas on what the future of Bond following April’s release of No Time to Die will bring.

Tune in next time as 2008’s Indiana Jones and the Kingdom of the Crystal Skull is discussed. We’d also like to extend a special thank you to Colin Hope for joining us on the show and please listen, rate and subscribe!