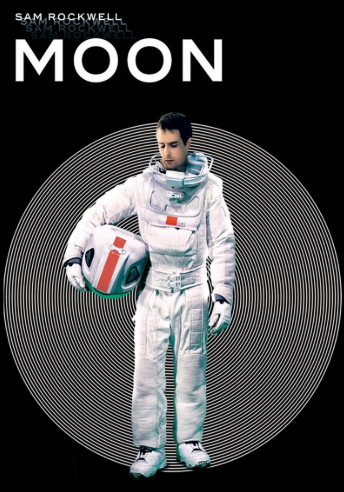 This time, we’re digging into Moon from 2009 and along the way we ask, what is on the Moon that humanity needs so badly, how is cloning simplified in this film and was this the beginning of Sam Rockwell’s prominence in Hollywood? Let’s dig in….

Directed by Duncan Jones: The son of the late musician David Bowie, Moon was Jones’ first foray into major film-making. The success of this low-budget, critically acclaimed Indie film, earned him the opportunity to direct Source Code in 2011 as well as Warcraft and Mute. He may have stumbled a bit with his last two outings but it’s not cause to place him in “director jail” just yet. While his next project remains unconfirmed, we can’t wait to see what he does with his career.

Starring Sam Rockwell as Sam Bell: Rockwell wasn’t always known as the major Hollywood we consider him to be now, he was more known as a comedic actor or manic villain (see our previous discussion on Galaxy Quest) having previously appeared in films like Confessions of a Dangerous Mind, The Green Mile and Matchstick Men, but 2008/2009 is when he started to change those perceptions after appearing in The Assassination of Jesse James by the Coward Robert Ford, Frost/Nixon and Iron Man 2. He has gone to win an Academy Award (Three Billboards Outside Ebbing, Missouri) and seems to be nominated for an award every year as he’s appeared in Vice and Jojo Rabbit since 2017.

Kevin Spacey as the voice of GERTY: While Spacey does not physically appear in the film, there are few actors who are able to deliver the even keeled yet chilling performance of Sam’s robot caretaker. Before the sexual assault allegations came to light against him, Spacey was one of the most in-demand actors in the film industry. His credits are too numerous to list here as are his accolades, but his credit on this film adds a certain gravitas and credibility to the production that another actor might not have been able to pull off.

While Moon itself has received critical acclaim, particular attention was paid to the look of the film including the Moon base where the film is primarily set and the special effects used to enhance the desolate Lunar setting. The Moon base itself was a full 360 degree set measuring almost 90 feet long and 70 feet wide and as our podcast hosts Chris and Sean point out, it looks lived in. Sam’s living space is peppered with photos of his family as well as a Tennessee Titans poster, but the base is not as pristine as seen with other planetary bases in other films.

There are parts of the habitat that are dirty with layers of Lunar soil all over the floor, GERTY is covered with dents as well as the occasional coffee ring and Sam is even left to piece together a table using bins filled up with Lunar soil. His requests for repairs go unanswered as the list seems to be endless for Sam.

For a film of this budget ($5 million), the visual effects are modest, but impressive. Obviously, the filmmakers wouldn’t have been able to afford computer graphics on the same level as a Marvel film. The company responsible for the computer graphics on the film, CineSite, has provided visual effects for blockbusters like Avengers: Infinity War, Avengers: Endgame, The Witcher and Independence Day: Resurgence, but often deals with productions of modest budgets.

There are some obvious moments where the effects are clear such as seeing GERTY’s extra arm maneuvering around to assist Sam at times. The Lunar rovers seen in the film are actually miniatures and as our hosts also point out, it is appreciated when a film production will go the extra mile to add a sense of realism to the experience.

What is on the Moon?

As seen in Moon, Sam is nearing the end of his three year contract for Lunar Industries Limited and he has spent his time mining the Moon for Helium-3, an element that scientists believe could hold the key to nuclear reactors in the future. Our atmosphere on Earth currently prevents us from being able to access it on solar wind.

But, what else is on the Moon that humanity could be so desperate to find?

Unfortunately, cheese probably won’t be found, but silicon, which makes up 20% of lunar soil and an important component of microchips, is up there along with rare earth elements.

REE’s are essential components for hybrid cars as well as smartphones and this may be obvious from the name, they are incredibly difficult to find on Earth.

Metals such as titanium and aluminum can also be found on the Moon’s surface and depending on how these metals are refined, could yield other elements like oxygen and iron.

There is also speculation that water could be found in abundance on the Moon if the poles are found to have ice caps.

So, given humanity’s ability to suck up all the resources in a location, it’s likely that we’ll need to turn to space to provide new sources of these precious elements. So, a three year mining contract on Mars isn’t outside the realm of possibility.

The Future of Space Travel

Our podcast show hosts have noticed a recent trend in films involving space exploration; the idea of space travel becoming privatized and corporations controlling who goes into space and what the missions are. Moon and Ad Astra are recent examples of this with the former being an early example of this trend.

For starters, Sam is an employee of Lunar Industries Limited and NASA or any other state sponsored space agency is not mentioned at any point in the film. LIL isn’t just on the Moon as it is mentioned later in the film that a crew will be arriving from Jupiter to “assist” Sam.

The privatization of space travel is a concept that we can see in the news almost every day with business moguls like Jeff Bezos of Amazon and Elon Musk’s SpaceX developing new engine designs as well donating vast amounts of money to research new planetary habitats. With state sponsored organizations like NASA devoting less time and money for space travel, it seems that no one is left for this endeavor except for private corporations.

NASA recently announced plans to add a hotel to the International Space Station, a job that was contracted out to a private company and expected to be finished sometime in 2024.

SpaceX has also announced plans that it would begin taking civilians to space for the right price. To be clear, going into space is an immense physical undertaking. Astronauts can train for years before they even sit in a spacecraft so for a private company to take private citizens up to space also sounds like an enormous financial commitment.

So, it may be safe to assume that these ventures will not be for the ordinary citizen. Hopefully someone gets involved in the future that will make this affordable for the average citizen.

Since its release in 2009, Moon has gone on to receive critical acclaim as well as praise from the scientific community. The film was screened as part of a lecture series at NASA at the request of the instructors with one of the attendees commenting that they were working on a type of building material that would be made out of the lunar surface’s material.

This acclaim is part of another Hollywood trend; that of making accurate yet entertaining science fiction films. This is an aspect of film-making we’ve come to laud on the podcast and we will always appreciate an effort to make films like this realistic and approachable for the average moviegoer.

In addition to praise from the scientific community, Duncan Jones received numerous critic’s choice awards for “Most Promising Filmmaker” and for similar awards. While Jones’ initial directorial outing is his most well-received, he has created a “spiritual successor” to this film with the Netflix exclusive titled Mute, that film has not been as lauded as Moon. Hopefully Jones is able to turn it around at some point.

On our unique scale, Sean rated Moon as a WOULD OWN citing a fresh look into the sci-fi genre and a deep look into what it means to be human while Chris gave the film a WOULD WATCH rating citing the twist with Sam and his clones as losing its effect upon repeat viewings. Spoilers!

What did you think of Moon? Are you a fan of Sam’s corporate overlords? Would you give up three years of your life to mine the Moon? Did you agree on our Red Shirts and Lens Flares? Listen to the episode to find out!

Please, listen, rate and subscribe on your favorite podcast app and tune in next time when we dive into The Signal from 2014!