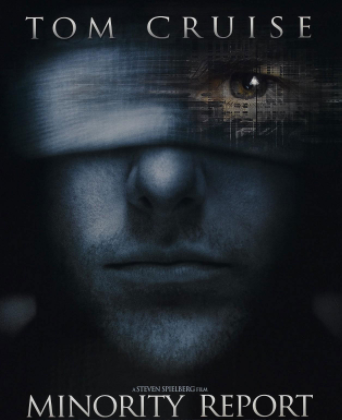 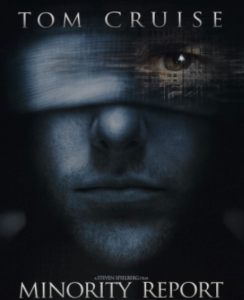 This time, we take a look at the future noir crime thriller Minority Report and along the
way we ask just how far is the government willing to go to stop crime, does Tom Cruise
not run enough in this movie and why 2054 will hopefully be just alright? Let’s dive in…

FROM THE MIND OF PHILIP K. DICK

One of the most prolific science fiction writers of the 20th Century also gave us some of the most memorable films of the genre; Philip K. Dick wrote stories that would later be adapted into films like Blade Runner, Total Recall and Paycheck. He also wrote the story for Minority Report and for the most part, the film is faithful to the original plot. There are some differences but that’s almost become the norm with a Philip K. Dick story.

The rights to produce a film based on Minority Report were optioned back in 1992 and was originally envisioned as a sequel to the 1990 film Total Recall starring Arnold Schwarzenegger and it’s likely this version of Minority Report would’ve starred him as well but the film labored in developmental hell for so long that the film went through several different versions before the filmmakers settled on the version that released in 2002.

Development originally began in 1997 and many actors were either offered roles or were cast including Matt Damon, Meryl Streep, Ian McKellen, Cate Blanchett, Jenna Elfman and Javier Bardem. Production was delayed twice; once so Cruise could complete Mission Impossible II and another time so Spielberg could direct A.I.: Artificial Intelligence and these delays caused the original cast to be shuffled around.

In the years since Minority Report was released, it has been cited as being particularly prescient for its display of future technology. One of the main points of the film is every citizen being scanned via their retinas literally everywhere they go throughout Washington, D.C. and this forces Anderton to undergo illegal surgery to swap out his eyeballs.

Retina scans or other forms of biometric security are becoming more and more prevalent among technology firms as well as financial institutions in order to better safeguard sensitive equipment. The use of these retinal scanners are then used to create personalized advertisements when people walk into a particular store. These advertisements are tied to an individual’s shopping history and in a precursor to today’s tracking cookies, make recommendations based on that history.

The idea of using technology to stop or prevent crime has also made its way to the real world via IBM and the University of Memphis. Working together, they developed the Criminal Reduction Utilizing Statistical History (CRUSH) program to be used by the University of Memphis to help the Memphis Police Department predict and help stop crimes. It was credited for helping reduce crime in Memphis by 31% and violent crime by 15%. It was so effective that a similar program titled the Crash Reduction Analyzing Statistical History (CRASH) was developed to analyze traffic patterns and to help predict traffic collisions.

Drones are also widely used in the film to help the police officers scan and identify suspects. Drones both manned and unmanned are being utilized by law enforcement for a variety including surveillance and helping to locate missing persons and the applications are limitless as the technology will continue to evolve in the coming years.

WHAT’S THE MORALITY OF A CRIME NOT COMMITTED

As Sean and Chris discuss, how does one go about arresting or prosecuting someone for a crime they haven’t committed? From a legal standpoint, cases like those from Precrime would almost immediately be thrown out given that no actual law had been broken and no murder committed either. There’s also the issue of almost unlimited government surveillance just to catch a few criminals. It raises the question of how many freedoms are people willing to give up just to feel safe.

As our hosts also discuss, the system of “Precrime” is fundamentally broken as it is possible to manipulate the Precogs and commit murder if you know how to do it. This comes to a head as Anderton confronts Lamar on the verge of Precrime going into effect on a massive scale. Lamar had killed an innocent woman just to protect his creation and ultimately brings down the system and exonerates the people who were arrested for a pre-crime.

Minority Report was both a critical and commercial success having grossed over $350 million and maintains a 90% rating on Rotten Tomatoes. It’s continued to enjoy success on home media releases but the accompanying media hasn’t enjoyed the same success. A tie-in video game adaptation titled Minority Run: Everybody Runs was released to mediocre reviews as well as a television sequel that premiered in 2015 which focused on one of the male precogs wanting to us his abilities to help stop crime but this show was ultimately cancelled after one season. Cruise and Spielberg would later collaborate again on War of the Worlds in 2005 and enjoyed similar success with that film.

On our unique scale for the Force Fed Sci-Fi podcast, both Sean and Chris were in agreement for their rating for Minority Report calling the film a WOULD OWN praising the performances the cast as well as the interesting debate surrounding ethics, technology and crime but the dated visual effects and the complex mechanics of Lamar’s ruse on the Precrime system make for a complicated and odd experience.

What are your thoughts on Minority Report? Is the film more noir instead of a techno thriller? Listen to our full episode to find out our picks for Red Shirts and Lens Flare and tune in next time as we discuss the 1982 cult classic John Carpenter’s The Thing