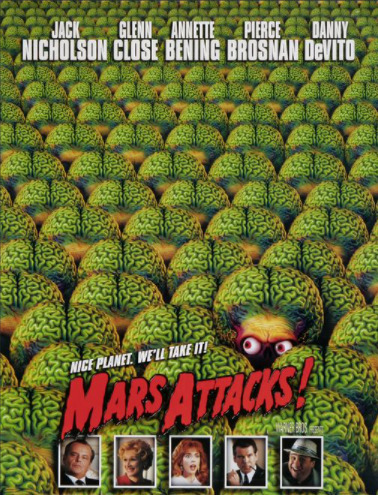 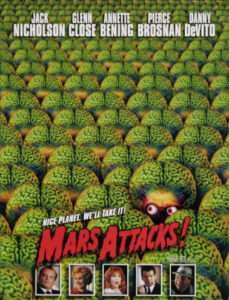 This time, we’re taking a look at the spectacular spoof Mars Attacks! And along the way we ask what do the Martians have against birds, are humans supposed to be this excited for a first contact scenario and how did trading cards lead to big screen film? Let’s dive in…

From Topps to the Big Screen 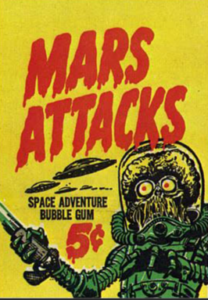 Mars Attacks did not begin life on the silver screen. The origins can be traced back to 1962 and a series of trading cards simply known as Mars Attacks! The cards were hugely popular in a Cold War America but the cards displayed scenes that were graphic and horrifying

for the time. Due to complaints received, several of the cards had to be repainted but were ultimately pulled from production and distribution after a District Attorney from Connecticut began making inquiries into Topps and the cards.

While the cards have been reprinted several times including several reboots, the original cards have now become collector’s items with certain cards fetching over $3,000 at auctions. In the early 90’s, screenwriter Jonathan Gems began work on a script and it was eventually greenlit by Warner Brothers. The original pitch for Burton to direct involved another movie which would’ve been titled Dinosaurs Attack but given how Jurassic Park had released in 1993, trying to make another dinosaur blockbuster would’ve sunk a movie studio at the time.

With Burton on board to direct, he had to fill out his crew with his normal hires but the one snag was Danny Elfman. While working together on A Nightmare Before Christmas, a rift had formed between Burton and composer Danny Elfman who had previously worked together on all of Burton’s films and created a signature feel similar to how Steven Spielberg and John Williams have created their signature. The exact details of the rift aren’t known and probably won’t be to the general public but the two were able to work things out and Elfman managed to turn in one of his most iconic scores.

How B Movies Influenced Mars Attacks!

Tim Burton has not disputed that his influences, not just for Mars Attacks, but all of his films in general came from the science fiction films of the 1950’s including Plan 9 from Outer Space, The War of the Worlds, Invasion of the Body Snatchers, Target Earth and Earth vs. the Flying Saucers. There are also influences from the disaster films of the 1970’s like Earthquake, The Towering Inferno and The Poseidon Adventure that can be felt here in Mars Attacks.

One of the question Sean and Chris ponder during the episode is trying to discern whether Mars Attacks belongs in the category of satire or parody. While satire is meant to subvert, parody is meant to make fun of but not to insult a specific genre or film trope. While our hosts disagreed on what the film actually is, it was all done for the sake of art as art is meant to subjective and no one is meant to draw the same meaning from the film.

Does Burton Make a Political Statement?

Certain directors like Oliver Stone and John Stewart make their political beliefs, Tim Burton does a great job of making fun of all sides and how politicians in general would handle a hostile alien force. Republicans are portrayed as warmongers who want to simply destroy the Martians while Democrats are shown to be naïve and willing to trust diplomacy even with the knowledge that the Martians want to destroy humanity and we see that both of these tactics do not work as the Martians make short of nuclear weapons and blow up Congress with ease thanks to their advanced weaponry.

Burton does a great job of balancing the barbs and making sure that everyone gets their fair share of fun poked at them. The only people who manage to survive the film are the ones who did the right thing or had a virtuous journey and didn’t try to get too involved in fighting the Martians.

Has the Window for Cult Status Closed?

While Mars Attacks was not a financial or critical success having only grossed $101 million against a $100 million budget, it was surprising to learn that the film hasn’t quite achieved the cult classic status that certain films like The Thing or The Warriors have received in recent years. In the 25 year since the film’s release, it hasn’t received any sort of retroactive turnaround on the reviews or any sort of grand reevaluation but maybe the film is owed that now.

Mars Attacks was released in 1996, the same year as Independence Day and while the latter film was a major success, critics and audiences believed Mars Attacks was even a rip-off of that film. Now that we are far enough reviewed from both of those films, both Sean and Chris agreed that it’s time to give Mars Attacks its due.

Using the unique scale for the podcast, Sean and Chris differed slightly in their review but both gave Mars Attacks high marks with Sean rating the film a WOULD OWN citing the visual effects but dated aspects of the film holding it back and Chris rating the film a WOULD HOST A VIEWING PARTY with the less than serious tone of the film and the comedic performances from otherwise dramatic actors made for an enjoyable experience.

What did you think of Mars Attacks? Do you agree with our rating? Who is your favorite fictional President? Listen to our episode for our choices of Lens Flares and Red Shirts and tune in next time as we dive into Rise of the Planet of the Apes?