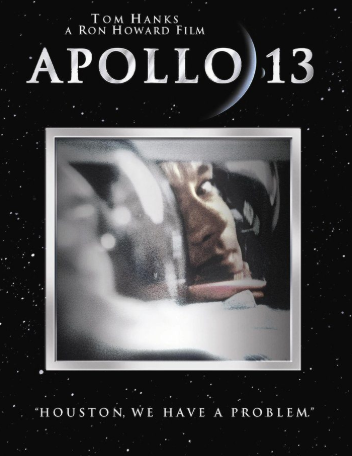 Force Fed Sci-Fi fans, we have a problem … as we look back at the Apollo 13 film, go over the Apollo 13 movie summary, the cast of Apollo 13 the movie, and more. Join us as we go over our Apollo 13 movie rating and review. Failure is not option this time! (Too corny? Probably, but I had to). Finally, we just want to mention that we wanted to step away from sci-fi just for this episode to help commemorate the Apollo astronauts and the Apollo 11 50th anniversary of the moon landing! Read on and/or listen to the podcast episode and enjoy!

The Apollo 13 movie summary goes a little something like this according to us here at Force Fed Sci-Fi … During the Apollo program, we have the launch of Apollo 13. Prior to this mission, Apollo 11 and 12 were able to land on the moon and Apollo 13 was slated to do the same. Astronauts Jim Lovell, Fred Haise, and Jack Swigert are eager to make it to the moon, but an explosion occurs as a result of one of the liquid oxygen tanks sparking. Now, NASA has to frantically work to bring the crew home safely as there are many issues that arose because of the explosion (power consumption upon re-entry to earth and even having to build an extra carbon dioxide filter out of whatever the astronauts had on board). After a sling shot after the moon, it takes a while for the crew to return home safely, but with the great minds working on all of these issues, these three astronauts survived against all odds.

The Cast of Apollo 13 the Movie 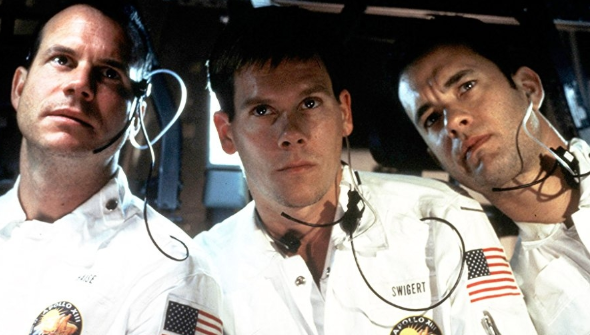 We at Force Fed Sci-Fi argue that while Hanks had his best roles in the 1990’s (Apollo 13 included), Hanks does a phenomenal job at any role he plays, honestly. In Apollo 13, he takes on the great and historic role of astronaut Jim Lovell during the Apollo 13 mission. Hanks, other than the film calling for a bit of dramatization of the historical events, embodied Lovell perfectly. In addition, John Travolta was originally offered this role. Luckily we did not get him as portraying Lovell and were happy to learn that the role went to Tom Hanks.

Another great actor included in the Apollo 13 film was Kevin Bacon who played the command module pilot of the Apollo 13 mission, Swigert. Again, a great performance by another great actor taking on this type of role. We’ll get into it a bit later, but the way the filmmakers wrote Swigert into the film isn’t entirely accurate. Like many other things, dramatization of the film is necessary for a Hollywood film.

While we miss Bill Paxton, we have to talk about how wonderful he was in this film as well. Fred Haise had the unfortunate mishap of developing a urinary tract infection while on the Apollo 13 mission. While it’s not an actor’s dream to act out being sick (especially after taking off in a rocket and throwing up), Paxton did a fine job as Fred Haise.

Gary Sinise had to play the astronaut who was grounded for the Apollo 13 mission (Swigert taking Mattingly’s place). The film portrays Ken Mattingly as being pivotal in the role of getting the crew of Apollo 13 mission back home. While we weren’t sure that he was the sole person at NASA to come up with the re-entry sequence for the capsule, he was a part of that group. Interestingly, Ron Howard let Sinise pick which character he’d like to tryout and read for, and he chose Mattingly.

Gene Kranz was portrayed by the great Ed Harris. Kranz was the daytime flight director during the Apollo 13 mission. We think Ed Harris captured the emotional composure that Kranz would have had to have during this time, but at the same time, you see him worried in the film a bit, especially as the initial explosion occurred on the spacecraft. With all of this, Ed Harris was nominated for best supporting actor, but lost to Kevin Spacey for his portrayal in The Usual Suspects. Chris guessed Tommy Lee Jones for The Fugitive, good guess Chris! But not quite 🙂

Continuing with the praise of the cast, Quinlan did a fantastic job as Jim Lovell’s wife, Marilyn Lovell. As the wife of Jim, Marilyn had to go through a whole slew of emotions during these times and Quinlan delivers a superb performance. She also was nominated for best supporting actress, but again lost. For this one, she lost to Mira Sorvina in Mighty Aphrodite (I’ll be honest I’ve never seen it).

Apollo 13 Facts and Differences Between the Film and History

There are some differences that the film changed from the actual history of Apollo 13:

Force Fed Sci-Fi’s Apollo 13 movie rating comes in at a “Would host viewing party” on our scale. We can’t say enough how well the characters were portrayed by the cast members. In addition, the detail Ron Howard puts into the film is impeccable: for example, the condensation dripping onto the astronaut crew during atmosphere re-entry was a great shot and we can’t forget the zero gravity shots Ron Howard wanted to make the film look more realistic. We all think Apollo 13 the film should have won more Academy Awards than the 2 that it did. In any case, bring your toy spaceships or whatever NASA related gear you have when you’re invited over for a viewing party of this movie!

So what did you think of the movie Apollo 13? Do you praise the acting jobs that we see and enjoy in this film? Would you ever want to become an astronaut? Leave your thoughts and comments below!