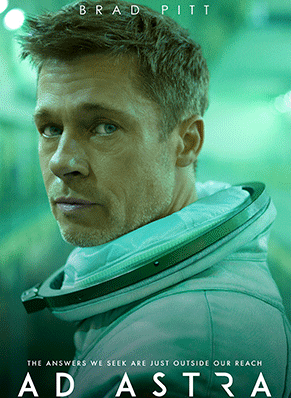 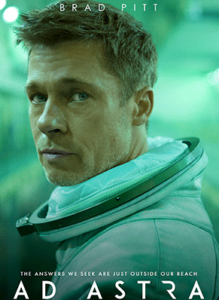 This week, we’ve decided to do an extra bonus podcast episode by taking a look at the new film Ad Astra. Join us as we go over the Ad Astra plot summary, disscuss the Ad Astra movie cast and the Ad Astra director, give our own Ad Astra rating and review, and more. So strap in and blast off as we travel through space to find out just how good this film is! 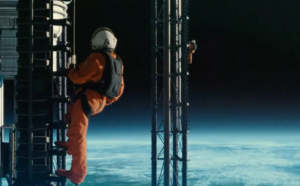 The film takes place in the “near future” according to the opening crawl. We find out that famed astronaut Clifford McBride left Earth 30 years prior on the LIMA project in order to try to find extraterrestrial life by being stationed towards the outer portion of the solar system. Unfortunately, he and his crew were never heard from again.

After surviving a fall off of the international space antenna due to a surge that emanated from somewhere other than Earth, Space Command Major Roy McBride is told by a few of his superiors that they believe his father, Clifford, is still alive and that the surge, which is now repeating itself and threatens to disrupt Earth and its inhabitants, is emanating from the LIMA project stationed at Neptune.

Roy is tasked with traveling to Mars to try to make contact with his father. However, there are concerns being kept from Roy about the mental state of Clifford if indeed he still is alive. Eventually, Roy finds out about these secrets being kept from him and forces himself to confront his father himself, all the while realizing his own emotional state is not in control as he always thought it was. He must not only confront his father in the end, but also confront himself and his own emotional and mental state.

When Does Ad Astra take place?

On our podcast show, Chris guesses that this film takes place at minimum 100 years into the future if not 200. We discuss that technology doesn’t to have seemed to advance as much as we might think. We do see the development of energy-based pistols (laser guns) as we experience a fantastic chase scene on the moon, and we also see that the human race can travel to the moon and other planets faster than today which seems to have led to a bit of colonization on the moon and Mars.

However, it is interesting to see that the ships traveling are still rocket-based and powered by fuel burning (it may be a different type of fuel since they can travel faster? but the audience doesn’t really know, just our possible speculation). In addition, future-based films usually display a utopian or dystopian society. This society seems like it’s the same, or as Chris simply put it on our podcast episode, things are okay (although, inflation has climbed really high as a pillow and a blanket costs $125 on a trip to the moon).

With all of that being said, there are some futuristic elements that the audience experiences in this film, but it doesn’t seem like a huge leap in technological advances; therefore, our guess is 100 to 200 years into the future.

James Gray is the director of Ad Astra and was also the main writer. We guess that this film was almost like a pet project, that he really wanted to make this film. Gray supposedly wanted to make one of the most accurate films to depict space travel. He does a great job as we have mentioned on the podcast before that space is a hostile environment, and it is definitely shown that way in Ad Astra. 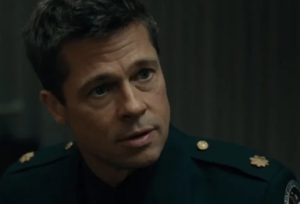 Let’s just start out by saying, wow! Pitt did a remarkable job with this character who needed to be portrayed as an extremely complicated man. Roy is a major with the Space Command who at first, seems to be someone who is constantly calm with his heart rate always being low (guess they needed to include his spectacular healthy heart rate to try to convince the audience he is of sound mind). However, the audience eventually finds out that he is really just pushing his emotions and feelings away and not dealing with them. This seems to be the cause of him separating from his wife played by Liv Tyler.

As the film goes on and Roy gets further away in space from Earth on his way to his father at Neptune, the control of his feelings he once thought he had slips away. We get to see Roy realize his anger towards his father for leaving him and his mother 30 years ago, but that he also has missed him a great deal. Also, while it’s not directly addressed, it seems he does feel remorse in regards to his relationship with his wife he once had.

At the end of the film, Roy seems to still love his father and intends to bring him home despite his father’s emotional faults, but his father refuses. Roy again has to deal with the loss of his father, but maybe he’s finally gotten some closure. Upon returning to Earth, he realizes that in a way he became a man similar to his father always focused on the mission, but now he needs to open himself up to the world and others, seemingly starting with his ex-wife.

If you made it through reading all of the above, you can understand that playing this type of character as Pitt had to do, would not be easy to say the least. That’s why we all really do think that he’s going to get at minimum an Oscar nomination for this role, and possibly even win Best Actor at the Academy Awards. 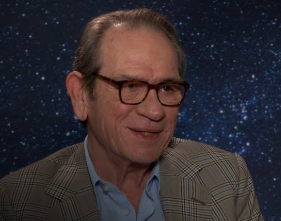 While it is not as big of a role as Pitt’s character, Tommy Lee Jones also gives a stellar supporting role performance as Clifford McBride, Roy’s father. The lack of emotion and caring for others is void in this character and only focused on his mission to find extraterrestrial life. He is driven to emotional instability and kills the crew of the LIMA project as they wanted to return to Earth, but he would not allow it.

His character softens a bit once he sees his son, but in the end still comes to the conclusion that someone like him does not belong back on Earth and forces himself away from Roy only to drift into the void of outer space.

Donald Sutherland, along with the rest of the cast aside from Pitt and Jones are not in this film a ton. Sutherland plays Pruitt who is an old friend and acquaintance of Clifford. He accompanies Roy part of the way on his journey. He is honest with Roy when he must part due to health issues and is the first to tell him that his father may be emotionally unstable, that Space Command thinks he may be behind the surges disrupting Earth, and the mission is to ultimately stop him and possibly kill him if Clifford is still alive. We last hear of Pruitt being in surgery, but it is unknown if he survives or not.

Negga as Helen Lantos is an interesting character that Roy crosses paths with. She is the one who reveals to Roy that his father has indeed lost emotional stability as there is a recording of him admitting that he killed his crew for attempted mutiny, Helen’s parents were among those killed. She helps Roy get onto the ship going to intercept Clifford as she agrees with Roy he should be the one to confront him.

Liv Tyler as Eve McBride is barely in this movie. I think she had one or two spoken lines. Maybe she missed being in space films like Armageddon? In any case, her character serves the purpose I think of clearly showing Roy’s change from being shut off from the world to becoming open to the world and those who are in his life.

Ad Astra is definitely a character study surrounding Pitt’s character Roy. We all think that this film was extremely well done and give this a “Would See In Theaters Again/Host Viewing Parties” on our rating scale. We didn’t cover it too much on the content above, but do so in the podcast – the visuals, especially those of outer space are done incredibly well. The story and screenplay are magnificent – we only get to really know two of the characters, but the story did not need anymore than that.

So what did you think of Ad Astra? Do you praise it as much as we do? Did you decide to go see Downton Abbey instead? (Sean didn’t seem too happy it beat Ad Astra out at the box office opening weekend, haha) Make sure to listen to the full podcast episode to find out who our red shirt of the film was and subscribe to the podcast so you don’t miss any episodes!