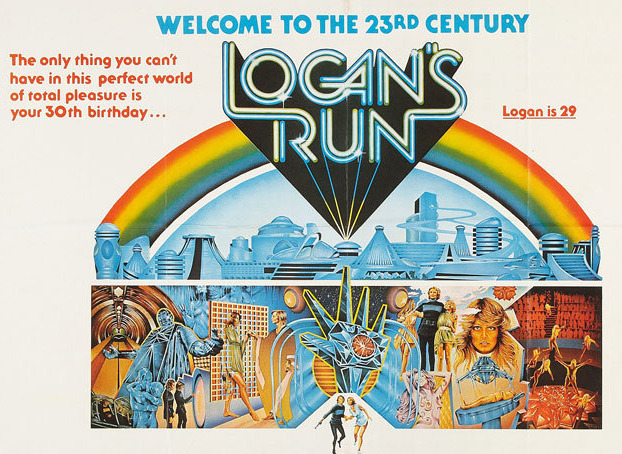 This time, we review and take a look at the forgotten dystopian classic Logan’s Run and along
the way ask why do dystopian films want to take the fun out of reproduction, why only keep
humans alive until 30, and how did this film get lost in the shuffle? Let’s dive in…

From the Page to the Screen

Logan’s Run is based on a novel of the same name by William F. Nolan and George
Clayton Johnson which released in 1967. Almost immediately after the novel’s release,
it was optioned for a future film adaptation, but it labored in developmental hell for years.

The producer who had originally acquired the film rights, George Pal, had differing
opinions with his screenwriters in regards as to the tone of the film. The writers originally
wanted to incorporate relevant themes at the time of the late 1960’s, but Pal wanted a
more fun sci-fi romp.

These rewrites caused production to be delayed as Stanley Kubrick’s 2001: A Space
Odyssey had revived the science fiction genre among audiences.

Pal would later leave the project and fellow producer Saul David stepped in
with a new writing team who made significant changes from the novel to the film.

For starters, the original age limit was raised from 21 to 30 to allow for a wider range of
actors and extras to be involved in the project.

The biggest spectacle of the film, the Carrousel, was created specifically for
the film and is not a part of the original novel. It was simply a means to create
a ceremony of sorts while the original novel simply had people “go to sleep.”

The backstory of the Cubs is also explained in greater detail and even giving Jessica
a friend who is part of the juvenile gang.

One of the biggest changes is the idea of Sanctuary. In the film, Sanctuary is not real
while in the novel, Sanctuary does exist, but it is located on Mars and requires a
rocket ship to reach it.

While audiences always expect to see some changes from a film’s source material,
Logan’s Run does a decent job of retaining the major elements of the film, but making
it more watchable for a 1970’s movie going audience.

The Relevancy of Logan’s Run

At first glance, the film seems like a campy sci-fi romp with cheesy special effects and
you’d be sort of correct, but it’s also interesting to note several major parallels to today’s
world.

The major element being the reliance of technology in both the film and our
world. There’s smart homes, magnetic rail cars and a gigantic computer that seems to
control every aspect of the mega city.

Nearly every home today has some type of smart technology from a refrigerator to a
thermostat or even an Amazon Alexa to remind you of a doctor’s appointment.
Everything and everyone is interconnected in a way that was only dreamt of at the time
of Logan’s Run release.

On the podcast episode, Sean and Chris also noted the parallel of the role of police officers in
in today’s world. Since the murder of George Floyd in the summer of 2020, police departments
across the United States have been trying to find new ways to eliminate the need for an armed
response and instead, utilizing mental health professionals to respond to situations that
may not require an armed officer to arrive on scene.

While in Logan’s Run, Logan 5 is sent an odd mission to find Sanctuary at the whim of
a giant computer that possibly misinterpreted a necklace. It’s almost symbolic of how police
departments and elected officials focus on a problem that doesn’t exist while ignoring the
plight of its citizens.

As Chris points out, while Sanctuary doesn’t exactly exist, there is an underground
movement in the mega city that is trying to fight the system and bring an end to the
dystopian society.

It’s interesting to note that while the film is considered to be one of the seminal sci-fi
films of the 1970’s, it’s not as widely remembered as one would think. The main reason
for this is Star Wars.

While Logan’s Run released in June 1976, Star Wars would release in May 1977 and
since movie audiences have a short memory, Star Wars captivated people for months
to come.

In addition to Star Wars, special effects were becoming more and more advanced with
each subsequent year. By the time the original Star Wars trilogy had concluded in
1983, the effects of Logan’s Run looked outdated.

It also doesn’t help the case for Logan’s Run that the film overall looks incredibly
outdated by today’s standards thanks to the bright and garish costumes, relatively
unknown actors who didn’t go on to bigger and better things, and the saccharine
ending with Logan and Jessica embracing each other as their dystopian society explodes
all around them.

While the film was a critical and financial success (it’s credited for helping MGM get out
of debt), it’s not as revered as some of its counterparts when it was released.

For years, there have been persistent rumors of a potential remake and there was even
a television series that appeared on CBS in 1977. However, this show was cancelled
before the first season concluded and plans for a film sequel were scrapped as Saul
David focused his efforts on the television show.

There were strong indications a remake would go ahead in 2000 with an idea to produce
a more faithful adaptation of the original source material, but this didn’t materialize.

Christopher Nolan even added fuel to the rumor mill as a script was being written by
Alex Garland, but there have been no updates on this project as of 2018.

Chris and Sean noted that while a film remake would also leave out several key details
from the original novel. A miniseries in the same vein as HBO’s West World or Watchmen
could be successful and bring the story to a new generation. All they ask is a producer’s
credit if it does get off the ground.

On our unique scale for the Force Fed Sci-Fi, both Sean and Chris were in agreement
that Logan’s Run would be a WOULD OWN. Both cited the film being anti-climatic and
the ending being disappointing and almost too similar to The Graduate. In addition,
the special effects were great for its time, but they have become outdated by today’s
standards. While our hosts had high marks for the film, they did note that it could be
difficult to convince a casual sci-fi fan to watch it.

What did you think of Logan’s Run? Do you agree with our choices for Lens Flares and
Red Shirts? Did Logan using that machine remind you of Tinder or Bumble? Should Box
have been a bigger villain? Do you think there’s potential for a remake?

Leave your answers, thoughts, and comments below! An be sure to listen to our full
episode on your favorite podcast app and leave us a 5 star review. Tune in next time
as Sean and Chris review the Steven Spielberg prescient crime thriller, Minority Report!