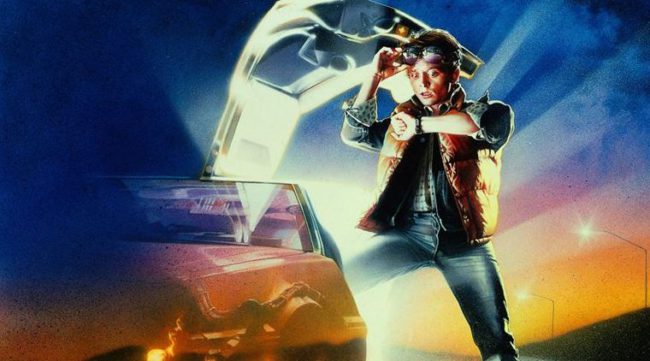 This week, we travel back in time and talk about Back to the Future including topics like Eric Stoltz being cast as Marty McFly originally, some of our favorite Back to the Future quotes, the obstacles the film had to endure to get its feet going underneath, and much more!

Difficulties Getting Back to the Future off the ground… 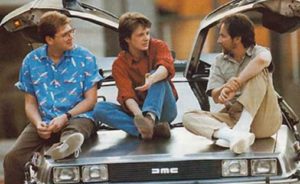 While Back to the Future turned out to be a great film, some of you out there may not know that it was difficult to get this story and movie moving forward.

Studios did not want to pick this film up and it went through an insane amount of re-writes. Disney didn’t want the film because of the Oedipal element, yet, as Chris points out in this show’s podcast, they have no problem breaking the hearts of millions in some their movies (e’hem, Bambi). However, luckily Steven Spielberg and his production company Amblin Entertainment was convinced to take this film on along with Universal Studios.

Did you know the original time machine was going to be a refrigerator instead of a car requiring the power of a nuclear reaction? The screenplay went through soooo many different drafts. Around 44 drafts if you were looking for a number. There were definitely some positives that came out of changing a few things. Then president and COO of Universal Sidney Sheinberg put his hand two cents in for a few ideas to be changed.

For example, Sheinberg changed the name of Marty’s mother’s name from Meg to Lorraine, referring to Christopher Lloyd’s character as ‘Doc Brown’ instead ‘Professor,’ and thankfully changing Doc’s animal that he is so willing to do an experiment on from a chimpanzee to a dog.

The one not so good suggestion that was played down as if Sheinberg was joking (even though he was totally serious about it) was naming the movie “Spaceman from Pluto.” Did you just furrow your eyebrows? I know we did when we learned that. We are actually still a little confused as to why this popped into his head. The name has nothing to do with time travel which is the main component of the film. All we can say is, thank goodness it didn’t take!

The story of Back to the Future, Eric Stoltz, and Michael J. Fox 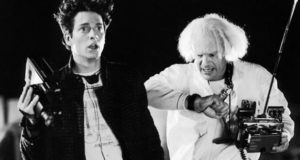 The casting of Marty McFly. Michael J. Fox was the original actor who was thought of as playing Marty McFly, but at the time he was locked in with his contract for the television show Family Ties. Therefore, Eric Stoltz was casted as the main character of the film. Simply said, he did not fit the role. They had shot several weeks with Stoltz. While he was a success in the film Mask, he was too dramatic for the role of Marty McFly.

Fortunately, it was agreed Michael J. Fox could play the role as Marty McFly, but he had to film Family Ties as well! Ever notice in the film a few times where Fox has huge bags under his eyes? He was filming day and night between the show and the movie. What a trooper if you ask us. Really, it would not have been the same film if Fox was unable to participate in Back to the Future.

Jennifer Parker. The role going from Stoltz to Fox caused the character of Jennifer to be re-cast as well, even though we only really see her in 2 or 3 scenes in the film. Melora Hardin was originally set to play this role, but was explained as being too tall next to Michael J. Fox. I suppose that makes sense as height of characters is something that is considered often when casting for films. The part then went to Claudia Wells.

Doc Brown. Christopher Lloyd plays the infamous Doc Brown in Back to the Future. He supposedly did not want to initially take the part for this film and eventually, his wife convinced him to take the role. In our opinion, this worked out well. Lloyd was able to bring his manic-type acting to the film and it fits well! Although, we do wonder what and how Doc Brown’s 24 hour scientific service does (next time you watch the film, look at the truck in the mall parking lot).

Biff Tannen. J.J. Cohen was actually picked to play Biff if Michael J. Fox was going to take the part, but as we know it went to Eric Stoltz and Cohen wasn’t tall enough (there’s the height issue again). So, the part went to Thomas F. Wilson and Cohen was cast to play one of his henchmen. When Fox came on replacing Stoltz, they kept Wilson as Biff. Again, in our opinion this worked out for the better. The scenes with McFly standing up to Biff add a bit of humor since he is SO much taller.

Back to the Future’s Mark in History

It was kind of clear early that this film was going to do well, maybe not as well as the makers of the film might have ever thought. The film ended up doing so well with its test screenings that the release date was moved up about a month from August to July of ’85. 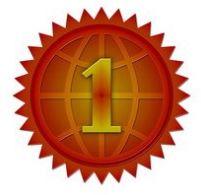 The movie went on to become the highest grossing film in ’85. Back to the Future also spent it’s position at the box office at #1 for 11 weeks. Oddly enough, it was knocked out of that position by National Lampoon’s European Vacation, but only for a weekend as Back to the Future went back to #1 the next weekend!

Honor of Being Preserved

Our podcast host Chris found out that this movie was chosen to be preserved in the Library of Congress in 2007. What does that mean? Well if you couldn’t figure it out, a copy of this film will be saved for the future if the worse were to ever happen. We love that this film was chosen as we think it is one of most fun sci-fi films out there, even after it’s been out for so long!

Force Fed Sci-Fi’s Rating of Back to the Future

We all agreed at Force Fed Sci-Fi that this film rates at the top of our rating system as a Would Host a Viewing Party! (Not sure how are rating system works? Check it out here!)

There are so many reasons we loved being able to watch this movie again, and we will continue to watch it in the future.

This film is simply a fun adventure combined with time travel. It can be extremely difficult to make a time travel film and have as great of a screenplay that Robert Zemeckis and Bob Gale wrote. They accomplished this difficulty though as they made a movie that can be watched by anyone, anytime, and almost at any age!

Our Favorite Back to the Future Quotes

Sean mentioned in this episode’s podcast there are so many great jokes and memorable lines. Most of which come from Doc Brown in our opinion:

Here’s a short clip with Christopher Lloyd’s “1.21 Gigawatts” followed by a “Great Scott!”

We hope you’ve enjoyed reading our notes and/or listening to our podcast about Back to the Future! If you haven’t listened to podcast, you’re missing out on our opinion if this film should ever be re-made, facts about Crispin Glover playing George McFly, the music included in the film, our Red Shirt, Lens Flare, and Toxic Fandom of the film, and more! So if you have time, take a listen to the whole episode!

Thanks for visiting Force Fed Sci-Fi and if you have any comments on the film, such as what your favorite quote of the movie is, or what you would have thought if Eric Stoltz played the role of Marty McFly, leave them below!