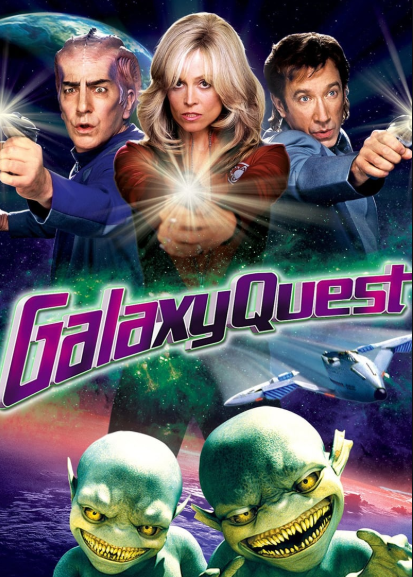 Hop on your spaceship for this week’s edition of Force Fed Sci-Fi and The Force Fed Sci-Fi Movie Podcast as we laugh out loud with the film Galaxy Quest as we cover the Galaxy Quest characters and aliens, mention some of our favorite Galaxy Quest quotes, discover just what exactly happened to a Galaxy Quest sequel and more. Strap in as we go on a Star Trek film spoof journey! Make sure to listen to our podcast episode and subscribe so you never miss an episode!

The Home Improvement star was not the first choice as the actor who plays the actor who plays Commander Peter Quincy Taggart (I think that made sense?). In fact, some of the others who were offered / considered for the main role included Alec Baldwin, Steve Martin, and Kevin Klein. We really thought Tim Allen fit the role perfectly. He sort of has that cheesy humor that fit well with this character as well as just the general idea of making comedic spoof of Star Trek.

Sci-fi star Sigourney Weaver didn’t take on the role of someone opposite of aliens or ghosts in this film, but instead did a great job delivering humor to audiences as Gwen DeMarco, an actress who played Tawny Madison, a character that just repeated and posed questions to the spaceship’s computer for the rest of the crew. While it sounds like one of the lamest jokes a Star Trek spoof could come up with, she delivers a performance that will make you laugh out loud.

We definitely argued whether or not Alan Rickman sort of stole the show a bit from Tim Allen. With his character being fed-up and negatively sarcastic about himself being a former star on a space exploration show mixed in with some brilliant acting (I love his facial expressions in this film), the comedic lines from the character are hard not to crack up about. Honestly, Alan Rickman was a vital part of this cast and without him, the quality of this movie would have been downgraded.

While Chris and Sean did have a Force Fed Sci-Fi redshirt pick for this movie (listen to the podcast episode to find out who … rather what it was), Rockwell’s character literally played a redshirt on the television show within the movie. Oh those poor Star Trek redshirts. Luckily, Rockwell’s character gets to tag along for the movie’s adventure, and kind of represents the character theme of “being able to grow.” While Rockwell isn’t the one you concentrate on a ton in this film, it’s nice to watch one of his earlier roles where he still delivers a solid and funny performance. 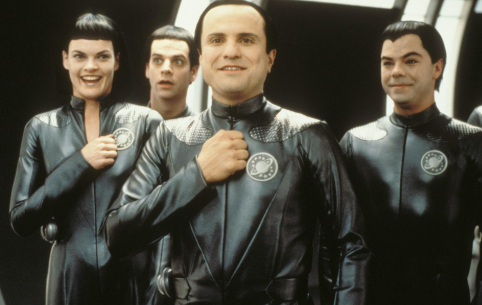 The humor holds up after twenty years of being released, especially for those of us who are Star Trek fans. A lot of one-liners that we love from this film:

What Happened to a Galaxy Quest Sequel?

So, there was a Galaxy Quest sequel talked about and the start of planning had begun, but unfortunately, it fell through. There was even a discussion on whether or not a television show could happen. Tim Allen was in support of continuing on with the Galaxy Quest story. However, with the passing of Alan Rickman (a legend and treasure), continuing on with this story faded.

Sean’s Galaxy Quest movie review rating comes to a “Would Own” and maybe a “Would Host Viewing Party” on our scale. Chris and I go full blown “Would Host Viewing Party.” We feel that this film is just a great take on a spoof of Star Trek as well as captures the Star Trek fandom accurately (even Patrick Stewart appreciated and liked this film). Combine those elements with a great cast and a great screenplay, you really do get a quality funny and comedic film that will make the audience chuckle. So grab your fan of sci-fi friends and take the time to enjoy the film Galaxy Quest.

What did you think of this film? Do you think it was as funny as we did? Do you think it captures the Star Trek fandom scene accurately? Leave your comments and thoughts below and don’t forget to check out the whole podcast episode and subscribe so you don’t miss an episode!