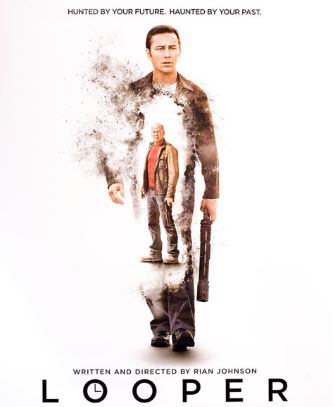 Time travel this week with the Force Fed Sci-Fi team as we go over the film Looper (2012) and discuss the movie cast, give our thoughts on Joseph Gordon Levitt’s makeup in the film, attempt to give a Looper movie explanation, and finally give our Looper rating and review. Hold onto your noses and don’t forget to listen to the podcast episode!

Many of us look for a Looper movie explanation after watching the film as the time travel doesn’t seem to make sense and there are some plot holes here and there. While Rian Johnson even said himself that this film is more of a character study rather than a time travel movie, it would have been nice to have gotten a bit more science out of the film, even if the science is based off of theoretical time travel. 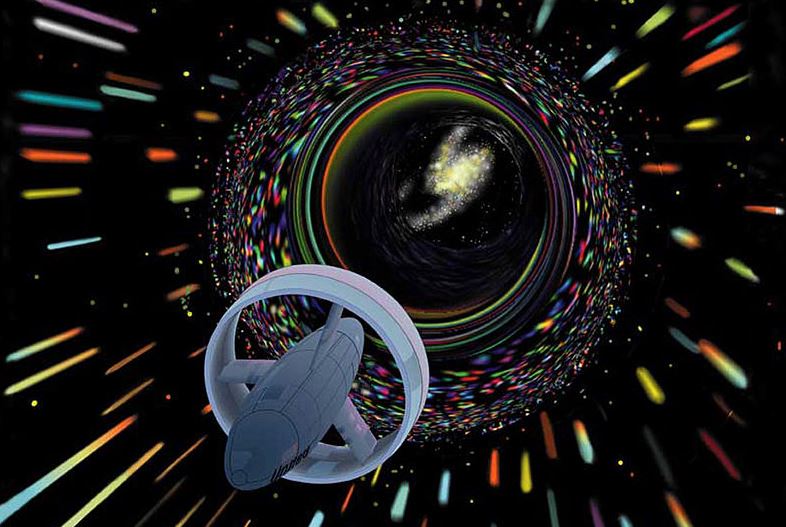 One question that comes to mind is, the rainmaker (Cid as a grown-up having the loopers close their own loop, although we never see him grown-up as the rainmaker) is described as having a prosthetic jaw. Now at this point in the film, old Joe (Bruce Willis) hasn’t come back in time yet, who ends up accidentally shooting Cid in the jaw. How can he be described as having a prosthetic jaw if old Joe hasn’t come back in time yet to shoot him? If you have a theory, please explain it to us! The only thing we can think of is that Cid grows up to the rainmaker no matter what possibly?

We’d like to think that with young Joe (Joseph Gordon Levitt) protecting Cid as a child affected him where he doesn’t end up becoming the rainmaker though. He also becomes the rainmaker because his mother is killed, assuming it is a looper and most likely old Joe when he comes back in time. However, for whatever reason, in this timeline that we watch and get with this film, young Joe stops the loop this time by, unfortunately, sacrificing himself so that his older self didn’t exist.

This causes another time travel paradox and makes it difficult to explain the events of this film. If young Joe sacrifices himself by taking his whole life, then old Joe would never have had the chance to come back in time and cause the conflict that envelops the majority of the movie.

These are only a couple of explanations that we can attempt to provide, but we also just pointed out the flaws that the movie poses in regards to time travel. Hence … why we needed a bit more science about the film’s time travel! 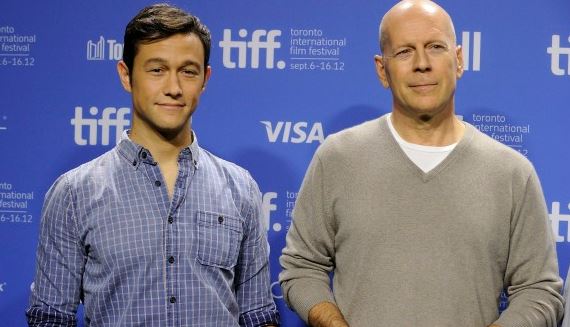 Despite the appearance they decided to give Joseph Gordon Levitt (not his fault), he does a good job at playing young Joe. Apparently he studied Bruce Willis’ mannerisms for a long time. It seems the filmmakers really wanted there to be a resemblance between old Joe and young Joe (apparently they didn’t want to address the issue of their hair though?)

We mention in the podcast episode that some say this is the last performance that Bruce Willis actually cared about and gave effort into his role. He did a great job in this film with his part, but after this, we do argue that Willis has only gone for the “B-level” action films since. What do you think?

Emily Blunt does a great job as Sara, Cid’s mother. And while it is part of her character and doesn’t have to do with Blunt’s acting (which was wonderful as well), her character is not such a good mother. Cid has trouble controlling his emotions if you’ve seen the film. Her solution (until the final scene that is)? To hide until Cid is done dealing with the difficult emotions he is plagued with in this movie. Not such great parenting, right?

While his role is smaller in this film, Jeff Daniels delivers more of a serious tone to his character, but is still able to keep a bit of a comedic tone. In my opinion, that can be hard to do for actors, but Daniels is a great actor and it isn’t surprising he is able to pull this type of character off. 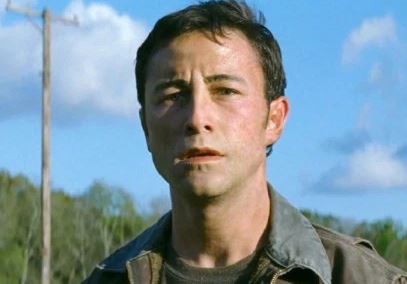 Why did the filmmakers for this movie feel they needed to really change Joseph Gordon Levitt’s makeup and appearance in Looper? While we give them credit for trying to do something unique (I guess), it really wasn’t necessary. As we said before, Joseph Gordon Levitt spent a ton of time trying to imitate and learn Willis’ mannerisms. Honestly for us, that would’ve been good enough. Instead, they made him use more time up in the day and spend additional hours in the makeup chair while prosthetics were applied to his face … to make him look like Bruce Willis? (It barely scratched the surface in regards to facial similarities to me)

They went this route anyways. We also argue that they could have found a different actor who looked like him a bit more if they really wanted that visual sameness between the two characters. Women pine over Joseph Gordon Levitt, but even my wife admitted it was hard to watch and pine over him in this film as his appearance wasn’t all that appealing (sorry Bruce if that’s offensive?). In any case, this was not a strong point for the film in our eyes.

We come to our Looper rating and review on our scale here at Force Fed Sci-Fi. If you’ve read the above, you’ll note that we’ve been a bit hard on some of the aspects of this film. In the end though, the positives did hold up (we’ll mention a few in a second) and we actually do give this movie a “Would Own” on our rating scale.

While the film suffers from the awkward look of Joseph Gordon Levitt and time travel confusion and holes, there were some bright spots about this film. Sean appreciated that there wasn’t so much action in this film and the action that was there, these scenes were short (in a good way), got to the point, and did what they needed to in order to add value to this movie. The action sequences were not drawn out like some of the big blockbuster movies do these days.

We do enjoy the fact that Johnson included the components of a character study in this too. We see an old Joe who thinks that since he’s older and has grown-up (stopped using drugs and stopped his contract killing career), that he is the wiser one compared to his younger self. But in the end, his younger self is the one who becomes selfless and sacrifices himself for Sara and Cid. Finally, this is a nice original story.

Over that past couple of decades we’ve seen a bunch of sequels and remakes. It’s always nice to see a movie with a new and original idea. So while we may give you a hard time on some of the things in this film Rian Johnson, overall we think it was good movie.

What are your thoughts on this film? Did you find the time travel components confusing? Can you provide solutions to this confusion? Did you appreciate the look of Joseph Gordon Levitt? Leave your thoughts and comments below and make sure to listen to the whole episode on the film Looper (2012).