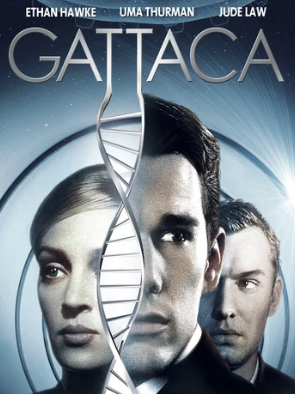 This time, we’re ascending a borrowed ladder after watching Gattaca and along the way we wonder if this is really the future, why everyone is dressed like they’re on Mad Men, are genetics the next wave of discrimination, and what’s it like living in a post-sex world? Let’s dig in…

Directed by Andrew Niccol: Prior to taking on Gattaca, Niccol had built a career directing television ads and took on the film industry in 1997 in his directorial debut while also writing the screenplay. He’s since gone on to write The Truman Show and direct films like Simone, Lord of War, In Time and Anon.

Danny DeVito served as a producer for the film. He has had great success in this avenue of his career as he’s produced films like Pulp Fiction, Reality Bites and Erin Brockovich

Ethan Hawke as Vincent: Hawke has enjoyed a steady career since the mid 80’s and his performance in Gattaca has certainly aided in that. He had previously starred in films like Dead Poet’s Society and Reality Bites and really enjoyed a breakthrough following Gattaca. He has since starred in films like Training Day, The Purge, Boyhood and First Reformed.

Uma Thurman as Irene: Thurman also enjoyed sustain success in Hollywood while serving as Quentin Tarantino’s muse after her breakthrough Oscar nominated performance in Pulp Fiction. While some of her film choices are questionable, no one has questioned her acting ability.

Jude Law as Jerome: Gattaca was Law’s real breakthrough performance and has continued to star in great projects in the twenty years since its release like The Talented Mr. Ripley, Enemy at the Gates, Road to Perdition, Sherlock Holmes and entered the Marvel Cinematic Universe in Captain Marvel. He gets a great opportunity to show off his acting skills here as an engineered man who is struggling with the “perfection” he was given.

A Brief History on Eugenics

The primary “science” shown in the film is that of eugenics, or the practice of selective breeding to eliminate certain “undesirable” traits. Those words are in quotes for a reason and we’ll get to that. The concept itself has roots in ancient times when Spartan elders would inspect every newborn boy to determine if it was suitable for the warrior lifestyle. The actually word “eugenics” emerged from an unlikely source; Charles Darwin. Not the man himself, but from his half-cousin named Francis Galton who sought to apply Darwin’s theory of evolution to humans.

Beginning in the early 20th Century, eugenics was gaining traction at universities and societies were formed to encourage eugenics as a form of parental responsibility. The British formed a society in 1907 with America following in 1921. International conferences were held that even enlisted religious figures to support the idea of eugenics with many countries adopting sterilization procedures for mental patients in the 20’s and 30’s. It seemed that everyone was taken in by this “science” with Winston Churchill among one of the more vocal supporters in the United Kingdom.

However, attitudes began to shift against eugenics when the Nazis took power in Germany. Ernst Rüdin, a Nazi who helped form the scientific basis for the racist policies of the Third Reich, was never prosecuted for the propagation of these ideas. The horrors of the Holocaust do not need to be discussed here. but let’s just say that it is truly one of the most horrible things ever documented in history. Many ethnic groups and “undesirables” that were deemed by the Nazis were targeted for eugenics, forced into camps and were either killed or became part of horrific experiments.

Needless to say, people came around to just how awful the idea of “eugenics” could be and has now been dubbed to be a pseudoscience. As discussed in the podcast show, our hosts debate whether or not eugenics could be a good thing (i.e. in the way of eliminating certain diseases or weaknesses), but inevitability, something that is developed for good can be twisted to become a tool of hate and oppression, and it’s usually done with the help of pseudoscience.

Bloodletting, conversion therapy, homeopathy, phrenology and trepanning were all utilized at one point throughout history because we thought they would help people. Eventually we realized that making someone bleed more doesn’t work, conversion therapy is truly awful, homeopathy is usually just poison, bumps on someone’s head don’t determine criminality, and drilling a hole in your head to cure headaches is an overreaction.

Gattaca could have easily been called A Day in the Life on a Borrowed Ladder as we watch Vincent impersonate Jerome for the entirety of the film, but he has had a rough life. In this world, babies are not made the old fashioned way, but are instead engineered a la eugenics.

Vincent is a love child (made the old-fashioned way) and is disadvantaged from birth, having already been diagnosed with a heart condition. We can see this painful moment on his father when he is reluctant. He “doesn’t want to put his name on anything defective” and Vincent will have to play second fiddle to his younger brother (conceived with the help of genetic manipulation) for the rest of his adolescent life.

Vincent is intelligent and determined to make his way in the world, but is immediately shot down due to his “defect” and resorts to using a “borrowed ladder” as it’s coined in the film. The barrowed latter refers to him occupying the life of Jerome Morrow, an engineered man who was crippled in an accident and can no longer function in society.

Hawke and Law occupy a sort of Odd Couple relationship as Jerome supplies Vincent with packets of blood, bags of urine, and strands of hair to keep up the charade. Vincent also plays his part when he wakes up every morning and vigorously scrubs his body to remove any sort of errant cells to avoid being caught. It’s unclear if this practice is illegal, but it sounds common enough since the authorities have a special phrase for it.

Following a murder at Vincent’s workplace, a misplaced eyelash causes the police to hone in on Vincent as a suspect while ignoring the other physical evidence that could be present at the actual murder scene. It’s easy to connect this investigation of Vincent to how certain population groups are treated by the police today, but all Vincent wants is to be treated as the intelligent person he really is; however, all anyone sees is a defect. Ultimately, Vincent is rewarded for his hard work and is given the opportunity to become a space traveler and is hopefully going to a world without discrimination.

While Gattaca has enjoyed a cult like success since release, it was not a major success at the time. The film only grossed $36 million against a $12.5 million budget, but was nominated for several Saturn Awards including Best Costumes and Best Music. In addition, it was nominated for an Academy Award for Best Original Score.

It lives on in minor infamy as it’s shown to geneticists as a warning about how the public perceives their profession. Our podcast show’s host Chris recounted a story during the podcast about how a genetics teacher showed the film to his class during high school. It was reported in 2009 that a television series was in development and would be a police procedural drama, but nothing came from that and there has been no news regarding a sequel or a remake for Gattaca. It’s unlikely we will see one given the lack of box office success of the original film, as well as the fact the main stars of the film have moved on to other projects.

Using our unique scale for Force Fed Sci-Fi, our podcast show’s hosts were in agreement for Gattaca calling the film a WOULD WATCH. It’s the rare film where Sean and Chris both agreed that the opening flashback/prologue of Vincent’s backstory is the best part of the film, but the overall story is clunky that’s bolstered by great performances of the cast. So what did you think of Gattaca? Why is sex so demonized in the film? Does Vincent display OCD tendencies? Tune in to our episode to listen to these discussions and more and please listen, rate and subscribe to the podcast and join us next time as we review the Terry Gilliam cult classic Brazil!