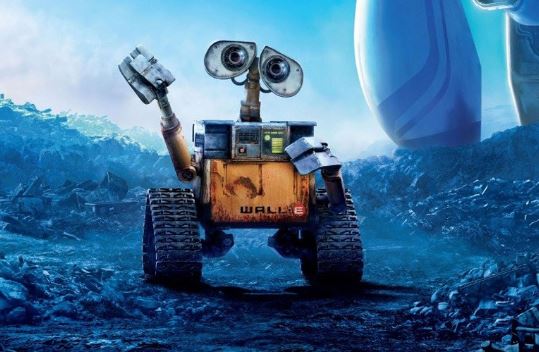 On our regular episode this week, we were delighted to watch the Disney-Pixar film WALL-E! This film is fun and you have to kind of remind yourself for a film you haven’t seen a while of the WALL-E movie summary let alone what the WALL-E acronym actually stands for, who is included in the WALL-E movie cast, especially the surprising Auto voice, as well as learning and taking a look at the WALL-E awards that were earned when this animated film came out. So join us these week as we explore these topics and more by listening to the full episode or reading our notes below!

The film starts out with a lone robot on what appears to be desolate and deserted planet Earth. WALL-E, the lone robot, is still performing his duties as a trash compactor essentially. However, along the way it seems that he’s evolved and has developed a personality. He collects trinkets he finds intriguing, watches the film Hello, Dolly! (even tries to dance like them in the film). 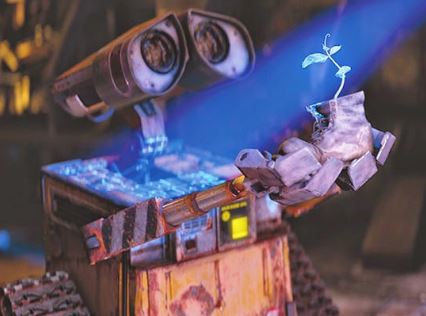 He is then surprised by the arrival of a robot which the audience learns comes from a human ship called the Axiom (one of the ships that left Earth when the planet was close to becoming to a point where sustaining life was not viable). The robot that arrives though, EVE, eventually meets WALL-E. They exchange pleasantries for a while and WALL-E shows her around and shows her his trinkets. However, once he shows EVE a plant, she completely shuts down. We learn that this was the robots mission all along, to see if life had begun again on Earth.

A smaller ship comes to pick EVE up to take her back to the Axiom, but WALL-E was determined to stay with her and so he joins the ride in order to arrive to the human populated ship. But EVE and WALL-E have trouble trying to finish EVE’s programmed mission of delivering a surviving plant as it is stolen; therefore, preventing the humans knowing that traveling back to Earth is a possibility.

EVE and WALL-E eventually find out that the ship and the captain’s first mate who is a robot himself, has been programmed not to return to Earth, even if life was found to be recovering. Apparently the decision was made when the humans first left as they thought there was completely no hope for the planet.

However, with the heroism of EVE and especially WALL-E along with the help with some of the humans on the ship, they are able to program the spaceship to return to Earth to begin recolonizing.

So were you wondering why the main character
robots are called by their designated names?

Well, WALL-E actually stands for Waste Allocation Load Lifter: Earth Class.
I suppose they didn’t want to include the ‘C’ in there, which I don’t blame
them, that wouldn’t have sounded as good of a name.

Then, EVE actually stands for Extra-terrestrial Vegetation Evaluator.
This name makes sense as she is sent down to the planet to search for
potential life on a planet to ultimately see if colonization is possible.

Ben Burtt is the voice of Wall-E in this film. While the character himself doesn’t say much (since he is a robot), we think he was spot on with conveying the motion with limited sounds he can make for the robot. But really, Ben Burt is more of someone who does sound design on films, including this film. Other notable films he was sound designer on were many of the Star Wars films (thank Ben Burt for the lightsaber sound “Vrooom” in our childhoods), but also the 2009 Star Trek reboot and another Pixar film Up! The man does great work, and here at Force Fed Sci-Fi, we really do thank him for his sound design contributions!

Elissa Knight is the voice of EVE (although WALL-E cannot say EVE apparently and calls her closer to the name Eva, but that’s alright, it worked!). We think she did a wonderful job complementing the voice of WALL-E. EVE is also a great character as she comes out of her “single-minded directive shell” after meeting and dealing with WALL-E. Although it didn’t help her that WALL-E is a bit of a cluts, but that helped add a bit of humor to the story.

Many people may have not realized it when this film came out, but AUTO was voiced by the MacInTalk (Apple’s text-to-speech program). AUTO is the character who is sort of the leader in trying to prevent the Axiom to getting back to Earth, which sort of classifies him as the protagonist of the film. But, in the end WALL-E and his compatriots end up succeeding despite AUTO’s efforts.

Sigourney Weaver was brought on to do a few lines as the Axiom computer for WALL-E as well!

Jeff Garlin voices the captain of the Axiom. He and this character did a great job of adding a bit more of a comedic component to the film as he becomes interested in the prospect of returning home to Earth. He asks questions about Earth’s history such as “Define Hoe-Down.” Garlin is no stranger to other Pixar films such as the Toy Story films as well as being in Cars 2!

John Ratzenberger and Kathy Najimy play John and Mary, respectively, in the film WALL-E. The humans on the Axiom have grown large as they sit on chairs all day and have their food and drink brought to them by the robots as well as just staring at screens while they ride on their chairs a lot. In a way, the humans have become their own version of a robot.

John and Mary though bump into each other after WALL-E pretty much sets them free from the computer screens. It’s a nice theme to start off with these two characters being the only ones to notice that there are other things around besides eating and a computer screen (eventually they discover a pool together, splash some water, and short-circuit a robot resulting in laughter!).

While Kathy Najimy definitely has some great credits in a few great movies, John Ratzenberger is no stranger to Pixar as he was voiced in a ton of films including, but not limited to, the Toy Story films, Finding Nemo/Dory, The Incredibles films, Ratatoullie, A Bug’s Life, and Inside Out!

Take a look at how John and Mary meet in the video below. You can really feel the tone and what the characters are feeling in this scene:

There was controversy though, surrounding whether or not WALL-E should have been in the Best Picture category. This movie clearly deserved it as it is thought provoking, emotionally provoking, and a fun adventure! While there was a push for it to be included in this category, it did not end up being featured as a potential winner for Best Picture. My hypothesis is that the Academy felt bad it was not included and did get a bit of “boo’s” about it. The following two Academy Awards then included a Pixar film in this category. Talk about pity in my opinion, but I digress.

As a group, we disagreed just slightly on where we would rank our WALL-E review on our particular review scale. 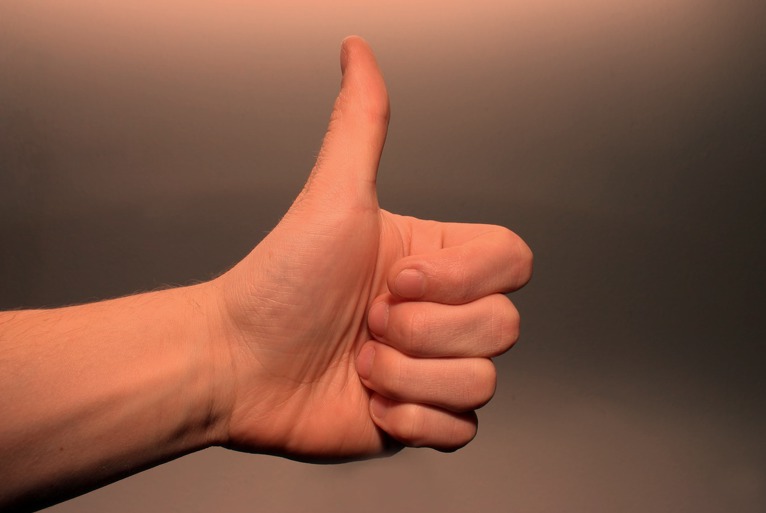 Chris actually went straight to the top and said he “Would Host a Viewing Party” for this film. A part of me doesn’t blame him. There are a lot of things friends and family could talk about after watching this film as it is a funny, but serious adventure for the two main robot characters.

Sean and I rank this as a “Would Own” on our review scale. We love this film for the reasons that Chris does, and particularly amazed by the first 40 minutes or so as it is just WALL-E and EVE on Earth with little dialogue, but yet the audience is still captivated by the story that is being told. I think he and I though don’t want to sit around and talk about the film with friends and family thinking too deeply about the themes and concepts this film presents.

Other than our slightly differentiating opinions, all of us here at Force Fed Sci-Fi really do love this film and do classify it as one of our favorite Pixar movies! Don’t forget to check out the full podcast episode on your preferred podcast app/distributor!

So what did you think of WALL-E if you’ve seen it? Is it also one of your favorite Pixar films? If not, which ones are your favorites and why? Leave your comments and questions below. Thanks for stopping by!