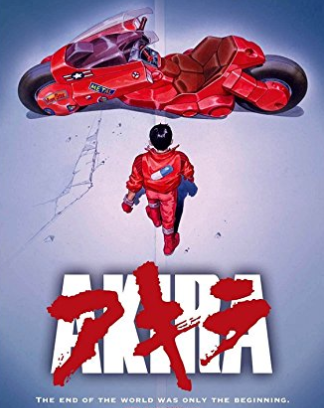 For this edition, we are taking a look at the anime movie Akira (1988 film). We’ll discuss Katsuhiro Otomo and the many parts he played involving this movie, the Akira characters, try to explain the ending of Akira as it is a bit confusing, give our own Akira movie rating, and more.

The movie’s main focus is about two young friends in a biker gang, Kaneda and Tetsuo, set in Neo-Tokyo (Tokyo was destroyed in an event only referred to as ‘the singularity’ which seems very nuclear-like). Tetsuo is captured after a biking accident by the military/government, is experimented on, and develops telekinetic powers. He slowly loses control of his powers and threatens the city of Neo-Tokyo. All the while his friend Kaneda, the leader of the motorcycle gang, tries his best to find him and save him from himself. Both young men are thrust into the chaos and dirty politics that surround the city. As the mysteries of a being known as “Akira” slowly unfold, it becomes more and more difficult for Kaneda to save Tetsuo.

Katsuhiro Otomo is best known for writing and directing the film Akira, but he also created the manga of the same name that preceded the movie. He brought to life this controversial, but artistic manga that ended up being one of the most inspirational animes of all time. In addtion, Otomo added his critiques of Japan, it’s politics, and culture.

We enjoyed Otomo’s visual imagery and the animation is still impressive even thirty-one years later. It paints a grotesque picture of what the near future could become. His depiction of Neo-Tokyo is really something – a grand city, vast in technology and civilization; however, the metropolis is riddled with crime, terrorism, and isolationism that many of the citizens experience.

The dystopian, cyberpunk styles with bright neon lights and colors all tied together with the soundtrack from Geinō Yamashirogumi and Tsutomu Ōhashi (Shoji Yamashiro) is so eerie that it’s almost impossible not to experience chills while watching the film. Particularly when Tetsuo finally begins to embrace his telekinetic powers and casts off on his brutal death rampage of the city.

All-in-all, Otomo should be best remembered for introducing anime to mainstream audiences and having the courage to tell a brutally honest, yet, disturbing story of two young men.

The leader of the bike gang and protagonist. His character is a bit divisive to us. Kaneda’s character arch does take a long time to come to fruition in the story. His personality is abrasive and felt one dimensional for the majority of the film, until the end. His whole motivation was machismo oriented and it seemed his sole purpose for doing anything was to be cool and look cool. In addition, Kaneda is kind of a hot head, especially when things don’t go his way.

It would have been nice to have seen a more in depth explanation of Kaneda and Tetsuo’s relationship as a child, but the film didn’t give that to us until the very end.  While Kaneda is very predictable and has a short temper, it does fit his character’s background and age group (I guess we don’t really know how old he is as the audience isn’t told, but seems most likely he is a mid to late teenager).

While his character arch does not reveal itself until the end like we mentioned, it is a positive change for good and was nice to see when it finally came full circle. He is met with a decision of either trying to save his friend or risking further death and destruction to innocent people. Kaneda’s arch is a great reflection on human behavior and how people tend to not change until trauma or insight.

Also a random side note, his Michael Jackson Thriller outfit deserves a 10, it is absolute fire!

Tetsuo is the antagonist of the film. Early perceived as being the weak link of the bike gang and seemingly pushed around by Kaneda, Tetsuo does some epic foreshadowing as he proclaims “one day you’ll pay” and in turn eventually does.

Tetsuo crashes into a telekinetic child during an epic police chase before being taken hostage by the military. He is then experimented on in order to discover and attempt to control the powers of “Akira.”

Throughout the film Tetsuo becomes increasingly angry as he slowly finds out more about himself and his strange powers before ultimately losing control and killing nearly everyone, including himself, in Neo-Tokyo.

Tetsuo is very similar to Kaneda with an immature and macho personality, except he is like a younger brother that just wants to prove himself. While there may be innocence felt with him trying to prove himself, he does still seem to get himself into trouble without thinking about the consequences.

In the end, we see that Tetsuo was an abused and bullied child just like Kaneda. Sharing this same type of trauma led to their friendship and unity as the audience learns with a flashback to their childhood.

The colonel just might be one of our favorite characters. It may seem like an odd choice, but he shows growth, experiences conflict, and had a true an evolving arch throughout the whole movie. He wanted to use the powers of “Akira” for the military complex and harness it to get rid of the corruption in Neo-Tokyo. Unfortunately, the Colonel is consumed by wanting the power and takes too long to realize that Tetsuo can’t be stopped. He fulfills his arch through the realization of “what have I done” in trying to harness the telekinetic powers to help improve Neo-Tokyo. Surprisingly he is saved by the already telekinetic children he has been keeping locked away at the end of the film.

The doctor works for the Colonel and military as a researcher to find out more about this hidden telekinesis embodied in the locked away children and “Akira.” He seems somewhat competent and seems to have good intentions at the beginning of the film. However, the Colonel asked him to ensure Tetsuo and his powers didn’t get too out of control and the doctor did realize this somewhere along the way, but continued his experiments anyways. Ultimately, he is killed by Tetsuo at the end of the film.

Akira’s tone and theme is definitely dark and gritty. It’s noticeable even with the opening scene when Tokyo in 1988 is blown up (nuclear-like) which, eerily harkens back to World War II. From there we jump forward in time to 2019 and Tokyo has been rebuilt. However, Neo-Tokyo is plagued with destruction, corruption, terrorism, gang violence, and anti-government protests. The whole film thrives on the dark undertones, even when the characters seem to be enjoying themselves they are surrounded by a disgusting looking city filled with seedy and suspicious people.

In order to explain the ending of Akira, we’ll take it step-by-step. “Akira” seems to be a person, or some sort of being, with great power and energy that was the cause of the original destruction of Tokyo in the past. During the film, it is learned that “Akira” has been in some type of cryogenic stasis.

Now let’s jump to Tetsuo. As we have mentioned, eventually Tetsuo loses the ability to control his telekinetic powers. For some reason, this leads him to turn into a giant mass (if anyone has a more specific explanation for this, we are all ears … comment below!).

Also, as we mentioned above too, the Colonel has been keeping unique children captive that also have telekinetic powers (which were developed with experimentation prior to the original destruction of Tokyo), but they are able to control these powers unlike Tetsuo. While the final battle between Kaneda and Tetsuo ensues, the children decide to release “Akira” in order to prevent Tetsuo (now a giant mass) from causing further death and destruction.

“Akira” creates another singularity in order to stop Tetsuo. In the process, “Akira” takes the children and Tetsuo away. We really don’t know where. It can be inferred though that they have been taken to a higher plane of existence as we hear Tetsuo introduce himself to someone, or something.

On our episode, our hosts gave their Akira movie rating with our scale that we use. Sean gives this film a “Would Host Viewing Party” while Chris gives this film a “Would Own” rating. We enjoyed the challenges each character faces which are weaved into a nice cohesive story as well as the representation of a detailed futuristic Neo-Tokyo, not just through storytelling, but the actual animation as well. The only thing keeping Chris back from hosting a viewing party is the complexity of the story as he believes the majority of audiences would not understand it.

So what did you think of the film Akira? Do you agree with our opinions? Did you enjoy the character archs and the struggles they had to face? Let us know your thoughts by commenting below. Make sure to listen to the podcast episode to find out more about the movie and who our red shirts were and don’t forget to subscribe so you don’t miss our in depth podcasting conversations!