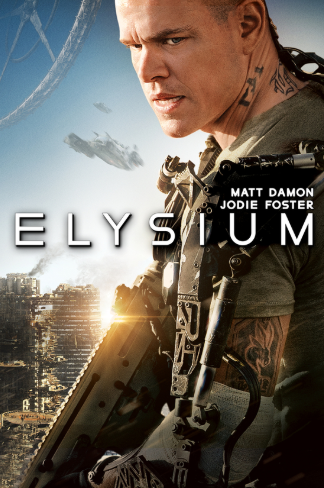 This week we dive into Neill Blomkamp’s filmography as we watched Elysium and discuss the Elysium exoskeleton and the its possible real world applications, how the floating habitat and the Elysium space station is actually inspired from history along with simply reviewing the Elysium movie summary and the Elysium movie cast. So, get a big dose of radiation (don’t really do that), fit yourself for a powered exoskeleton suit and journey to space in this sci-fi action romp!

The Elysium Movie Cast and Director

Matt Damon as Max – The role of Max was originally offered to two individuals from the world of music: South African rapper Watkin Tudor Jones (aka Ninja) who passed on the role and Eminem who also passed on the role after producers refused to have the production based in Detroit. The role then went to Damon who had the action chops from the Jason Bourne series to bring to this film. While we are interested to see what this film would look like with Eminem, at times Damon seems to be phoning it in along with most of the actors. 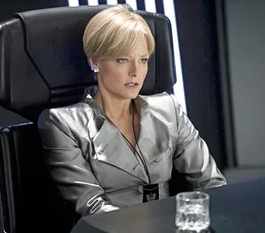 Jodie Foster as Secretary Delacourt – Foster starts off as the main villain but her character could’ve used more development and screen time as her eventual death does nothing for the audience. We just grow to despise her and there’s nothing sympathetic about her character as it seems like she was written solely for the audience to focus their hatred until Kruger takes over the black hat role.

Sharlto Copley as Kruger – Copley is a frequent collaborator with Blomkamp having previously appeared in District 9 (which is in our list) but he’s relegated to a henchman type role until he kills Delacourt. However, he definitely plays up the insanity of his character and it often overshadows the story and the other characters in his scenes.

Alice Braga as Frey – Sean and Chris feel like Braga provides the only nuanced performance in the entire film as she’s balancing her duties of being a mother and caring for her old friend, Max. She and Max have a past together, but not a ton of screen time is devoted to this and could’ve provided more context why they drifted apart prior to the events of Elysium.

Director Neill Blomkamp – Prior to directing this film, he helmed the wildly successful District 9 which received acclaim for its story and visual effects and Blomkamp along with many of his collaborators returned for Elysium and this was not as well received as District 9. While Blomkamp is a good filmmaker and has great ideas to bring to the big screen, we feel like this was not his best effort so hopefully he can return to Hollywood soon and thrill audiences once again.

Set in 2154, Earth has been ravaged by disease and famine. However, the wealthy have retreated to an Earth-orbiting space station called Elysium. Back on Earth though, a factory worker by the name of Max has been involved in a radiation-exposing accident. This leads him left with a deathly fate, unless he can make his way up to Elysium to use the wealthy’s technology to cure himself. Along the way, he gets involved and in the way of Elysium’s defense secretary’s plan for a coup against the current president as she vows to use more power to protect Elysium from the rest of the Earth dwellers. In the end, he doesn’t end up saving himself, but instead, saving humanity.

Elysium is set in 2154 as stated in the summary and let’s just say the world has not improved in the future. The world’s wealthiest individuals have left the Earth and built themselves a monstrous space station that is somehow visible from the surface. Crime rates seem to have spiked, there’s global food shortages and overpopulation has afflicted many regions. Sean and Chris debated during the podcast episode whether this version of the future is a dystopian creative look from Blomkamp or if this was to serve as warning for what we can expect in the next 100 plus years? Granted, the idea of the world’s richest 1% just up and leaving the planet seems a bit far-fetched, but stranger things have happened.

The Elysium Exoskeleton and Space Station 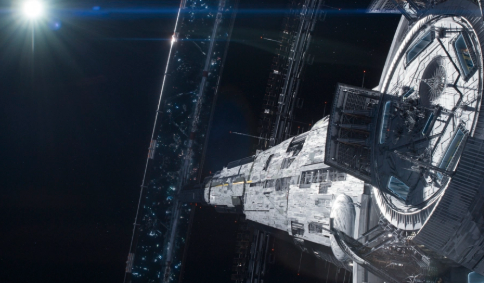 It was surprising to learn that the Elysium station was inspired from a real life NASA concept. During the 1970’s, NASA began to solicit ideas from all over the country for designs of a space colony and one of the designs that became well-known is what has become known as the Stanford Torus. Named after the design group from Stanford University, the Torus was designed to be two kilometers in diameter, would rotate once per minute, and utilize a complex system of mirrors to provide sunlight. However, this station would require over 10 million tons of material to construct and also included plans to build a mining installation on the Moon and would also require the ability to mine asteroids. Obviously, the Torus wasn’t constructed, but admittedly, the concept art looks pretty cool.

We were also surprised to learn that the powered exoskeleton suits our hero and villains use to fight each other may not be a far off reality. While Iron Man’s suits are an ultra-advanced version of this concept, the ones we see in Elysium may become a possibility thanks to a $75 million project budget thanks to DARPA. The basic concept of the suits is to augment or amplify the abilities of an individual soldier. Specifically, allowing the suits to help carry more gear for a battlefield medic or making suits that can utilize a weapon that may normally take two or even three soldiers to operate. This technology is still a long ways away and it remains to be seen what kind of civilian applications we could see but it’s still a nice pipe dream.

Was Elysium Meant to be a Video Game?

While reviewing Elysium, Chris and Sean brought up that the plot of the film unfolded holds similarities to that of a video game where the hero gets injured in some way, obtains equipment to turn into a super human, and kills a bunch of mercenaries and the set pieces almost looked like different levels of a video game. Even some of the camera movements during Max’s fights with Kruger move in a way that is similar to a 3rd person type action game. Maybe in the future Blomkamp can revisit this film with a video game sequel and give the story more of a chance to be flushed out and add more details.

Sean and Chris differed slightly on their rating this time around where Sean gave a WOULD NOT WATCH and Chris gave a WOULD WATCH on our scale. Sean explained that this film was a severe letdown from Blomkamp’s previous film and didn’t exactly redeem himself with his next outing. He cited the lackluster performances from most of the actors as main detractors from the film but praised the film’s visual effects. While Chris agreed on the visual effects, he also cited the film’s action as a good reason for watching the film. While it doesn’t need to be Earth moving, Chris considers it to be solidly entertaining and worth a two hour watch.

So what did you think of Elysium? Did the overacting take you out of the film? Did the themes seem heavy handed? Who was your Red Shirt? Leave your comments and thoughts below and don’t forget to listen to the whole episode and find out Chris and Sean’s thoughts about the possibility of living on the Elysium space station. Also, please subscribe so you never miss an episode!