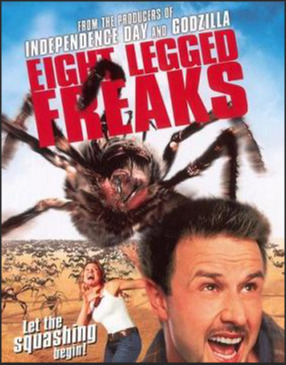 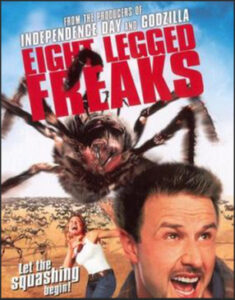 This time, we’re taking a look at the giant monster throwback film Eight Legged Freaks and along the way we’ll ask, why was there a time where David Arquette was a leading man in Hollywood, why don’t more citizens have guns in rural Arizona, is this movie nightmare fuel or just plain parody and how can improvising lead to a pretty decent movie title? Let’s dive in….

Beginning with the Godzilla films, the popularity of giant monster (usually giant insect) films exploded in the United States. The Godzilla films were originally created as a warning for the unknown effects of radiation following the numerous atomic tests conducted in the Pacific during the late 1940’s and 1950’s. There were also concerns as the United States and the Soviet Union entered the Cold War and nuclear destruction was at the forefront of the world’s population. This international strife made a rich ground for Hollywood to mine as films like The Beast from 20,000 Fathoms, Them, Attack of the 50 Foot Woman, Attack of the Crab Monsters and The Blob all become drive thru cinema fodder for the decade of the 1950’s.

These films are basic to say the least. Similar to how studio’s would make westerns in the 30’s and 40’s, the plots of these films usually involved some sort of radiation or chemical leak that affects local wildlife and transforms it into a giant monster that wreaks havoc on a small town, kills some of the local populace until the military arrives to kill the creature or some smart scientist who happens to be nearby finds a way to destroy the creature or the film would substitute giant local wildlife for a giant alien and the rest of the plot would remain the same. Obviously, this formula became dated and soon after the 50’s were over, these films quickly fell out of the style and television was quickly becoming the new desired media in Hollywood.

The giant monster or kaiju genre has experienced a resurgence in recent years following films like Pacific Rim (which we have recently covered on Force Fed Sci-Fi) as well as Godzilla and its subsequent sequels such as Godzilla: King of the Monsters (which we covered in 2019) and Godzilla vs Kong (which will be covered in a future Bite Sized episode). It’s unclear what the genre will be like in the future but it is exciting to see great films being released with such a reverence for the genre.

David Arquette as a Leading Man? 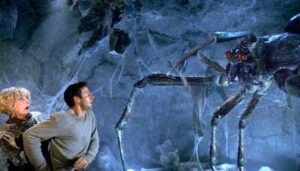 While hard to believe now, David Arquette was a prolific actor in the late 90’s and early 2000’s. Besides appearing in the films previo

usly mentioned, he had also starred in Airheads, Never Been Kissed, 3000 Miles to Graceland and The Grey Zone but as Sean and Chris note during the episode, it’s hard to buy into him as a leading man that’s meant to save the day in Eight Legged Freaks. Perhaps an actor like Kurt Russell could have added some gravitas to the role but hindsight is 20/20 and we’ll never know at this point.

Arquette’s character isn’t the only one we can have a hard time connecting to as the rest of the characters in the film are not that likeable. The town mayor is constantly looking for get rich quick schemes, the deputy is a doofus, the conspiracy theorist radio man is a weirdo, several of the townspeople abandon their friends and neighbors to die when they’re captured by spiders and even the sheriff’s dead husband was a serial cheater and the sheriff is the only decent character we get during the film as she just wants to protect her daughter and do her job. 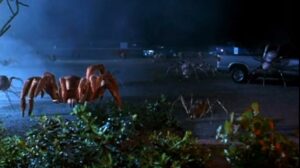 While it may seem like Eight Legged Freaks could have become a shlock fest of poor special effects, the CGI at the time in 2002 manages to hold up well. This was a time in Hollywood when more and more films were beginning to use computer graphics for just about everything they possibly could and the year contained some great examples of the film technique including Spider-Man, The Lord of the Rings: The Two Towers, Star Wars Episode II: Attack of the Clones, Harry Potter and the Chamber of Secrets, Star Trek: Nemesis and Minority Report (which we’ve also recently covered on the podcast).

In spite of the mixed ratings at the time, Eight Legged Freaks managed to gross $45 million against a $30 million. It’s unclear if the film managed to turn a profit but there’s a good chance it did given how a sequel was initially greenlit in 2003 but there have been no updates about this sequel since then and it’s likely it was cancelled. There was even a video game adaptation titled Eight Legged Freaks: Let the Squashing which could be downloaded directly from the movie’s website but is no longer available as the website is no longer active.

In rating Eight Legged Freaks, both Sean and Chris rated the film as a WOULD NOT WATCH with both citing the lack of decent characters, better examples of the genre available for viewing and the fact that this type of film would be relegated to a Sci-Fi Channel Movie of the Week if it were greenlit today all contributed to the rating.

What did you think of Eight Legged Freaks? Do you rate the film higher than our hosts? Listen to the episode to find out our choices of Red Shirts and Lens Flares and tune in next time as we review Mars Attacks! Please rate and subscribe to the Force Fed Sci-Fi podcast wherever you get your podcasts!