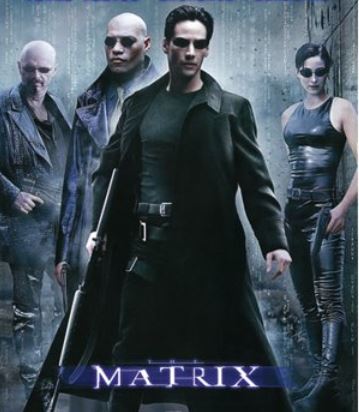 This week we take you back to philosophy 101 with our review of The Matrix. Join us as we take a look at The Matrix movie cast, talk about the red pill, blue pill meaning, ask the question ‘are we living in a simulation?’ and finally, give our own Matrix movie rating.

The Matrix does serve as another cautionary tale very much like most modern sci-fi films. The film critiques our reliance on technology, human nature, reality, spirituality, and “are we truly living our best life.” We followed a young hacker who could not come to grips with his mundane existence and ends up finding out that everything he knows is a lie. This film borrows elements from Plato’s “Allegory of the Cave” and Christianity, though, not too heavy handed.

The Matrix Movie Cast and Directors

The Matrix is written and directed by the Wachowski’s. The film serves as their second directorial effort after 1996’s “Bound”. The Matrix was an international success and skyrocketed the Wachowski’s to global fame. Critics raved about their direction, story, and use of mind-bending special effects.

Our podcast show hosts had some commentary on their careers so far. Chris believes that the Wachowski’s may have peaked with this film due to their follow-up films never catching the same fire as the first one. Sean felt otherwise, citing “Cloud Atlas” as a nice return to form for the Wachowski’s, but does agree they have yet to make another film as universally acclaimed as The Matrix. 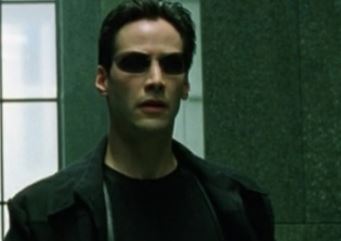 Keanu Reeves was sort of lucky in a sense to get the part of Neo since the studio seemed to want a few other A-list actors to have the role at the time. The list of actors who turned down the role included Will Smith (who went to film Wild Wild West instead … ha!), Val Kilmer, Brad Pitt, and Nicolas Cage. Johnny Depp also auditioned for the role, but ultimately it went to Reeves.

It’s curious to think about how different the role of Neo would have been with Will Smith donning the leather and glasses. In the end we got Reeves, and not to disappoint. Reeves worked hard on perfecting his fight scenes which we believe have carried over to the John Wick films.

Neo as a character took the audience on a ride throughout the film as we see him grow and become more certain of who he is and what he can do in the Matrix. Elements of religion with Neo representing a Christ-like figure were prominent as he served as “The One” and would end up dying and coming back to life. The only criticism was (Sean gave) felt Reeves’ acting was stiff throughout the film; however, there’s always the possibility this was a directors choice and preference.

Fishburne’s character served as a mentor and coach throughout the film, sort of like Neo’s Yoda. He awakens Neo to the idea that he is part of the machine and needs to “unplug” in order to truly live.

Morpheus is cool, has great shades, and a solid fighting style. However, it feels like Morpheus and his whole crew were “too in for the win” or being so sure that Neo was the chosen one.

While watching the film Morpheus would drop one-liners like a college philosophy professor and have Neo fend for himself. As leaders and mentors go, we would give him a C+.

The studio initially wanted Janet Jackson to play the role of Trinity, but due to scheduling conflicts she had to drop out. However, the role eventually went to Moss who is quoted saying “she didn’t have a career before The Matrix. This film definitely was the turning point in her career as her fame shot up to the top, momentarily at least.

Agent Smith serves as our villain in the story, at least the “machine villain” in our own terms. He is set on finding Zion so he can finish what his program was meant to do. Agent Smith said he had been with the Matrix since it was created six cycles ago.

He has a brilliant scene with Morpheus where he calls the humans “a disease” and almost makes you contemplate about that statement for a second.

Weaving was exceptional in his performance and it’s safe to say The Matrix made him famous on a global level, and maybe even became typecast as a villain from here on out? (Red Skull, Megatron, Agent Smith) 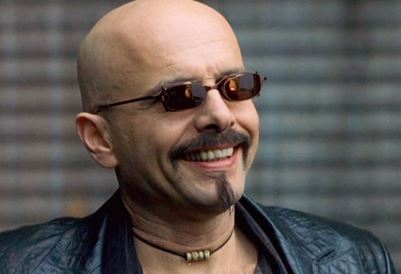 So we refer to him as “Joey Pants” (giggle) … it’s just easier. Joey Pants was really the only actor with a successful resume prior to this film. He took the role as the heavy and served as a “Judas-like” character that ends up selling out Morpheus to Agent Smith. In other words, he’s our “real-life villain” compared to Agent Smith. It was easy to tell at the beginning that something was up with this guy, he complained all the time, made creepy remarks to Neo and Trinity.

As a viewer you knew that Cypher was upset with how his life had turned out. Cypher meets his end by getting blasted by Tank after murdering several of his colleagues. Cypher also is in the only prominent plot hole scene with Agent Smith, when he sells the group out. How did none of the other crew members not know what Cypher was doing … someone had to plug him in and out of the Matrix!

Anyways, overall Joey Pants (still love our nickname) did a great job and we loved how he just jumped onto Morpheus’s lap when he’s explaining his diabolical plan to the group. That had to be difficult for Fishburne not to react.

The Creation and Injuries of The Matrix Kung-Fu Fighting 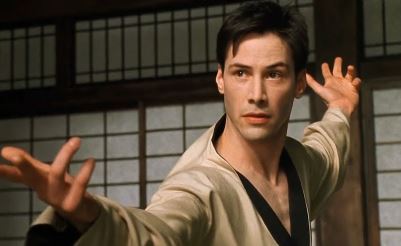 Yuen Woo-ping, the martial arts choreographer for this movie, required the cast members to through four months of training in order to prepare to film the intense fighting scenes.  Unfortunately, injuries caused setbacks for Reeves and Weaving. Reeves suffered a level-two cervical spine fusion that was beginning to cause him paralysis in his legs prior to the training. As a result, the first two months of his four-month training was “lighter.” This is also the reason why we didn’t see him kick much in the film. Weaving actually did get injured during his training for this film and had to undergo hip surgery.

The Matrix and the Creation of Bullet-Time 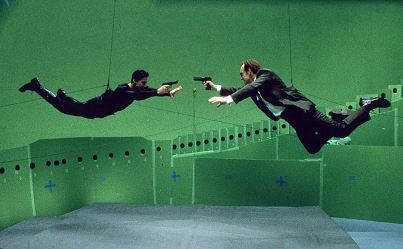 Bullet-time changed the game in the movie world. No one had seen anything like this and since The Matrix, bullet-time has been parodied frequently in cinema. To explain, “Bullet Time (sometimes referred to as time-slice photography) is a visual effect used to slow down time during an action scene, allowing high speed movements such as the flight path of individual bullets to be seen by the audience. The projectiles may leave visible streaks and trails as they fly through the air” (source).

There are four instances in the film when bullet-time is used: 1) the beginning kick with Trinity (great decision to open with this scene), 2) Neo dodging bullets on the roof, 3) Morpheus running to jump out the window, and 4) Agent Smith and Neo fighting in the subway. All four scenes required extensive set up and CGI in order to get the right moment on film. These actual timing of these shots is extremely short, like seriously only a second or two. The end product left us musing over how the visuals still hold up twenty years later. 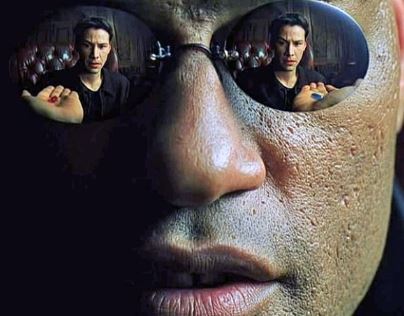 So what the heck was Morpheus talking about with the red pill and blue pill? Don’t feel bad if you didn’t get it’s meaning the first time you watched this film. If we may, the answer to this question can be simpler than the cryptic message we got in the movie. The red pill represents accepting your reality, knowing the truth, and being free while the blue pill represents ignorance to your reality, unaccepting, and distorting the truth.

There are even some lines in the film that represent the red pill and blue pill perfectly. Cypher, who regrets taking the red pill and wishes he would have taken the blue pill instead states, “ignorance is bliss.” On the flipside, after Morpheus offers the two options, he reasserts “remember, all that I’m offering is the truth, nothing more,” aka the red pill.

Are We Living in a Simulation?

Believe it or not, whether we are living in a computer simulation or not is something that has been debated and thought about.

We encourage you to watch the video below with Neil deGrasse Tyson commenting on living in a simulation.

We here at Force Fed Sci-Fi unanimously give The Matrix a “Would Host Viewing Party” movie rating on our unique scale. In the end, the audience is blown away by the insatiable kung-fu and brilliant “bullet-time” that sends your head spinning and wanting more. This film is groundbreaking on almost all levels and keeps you gripping your seat until the credits roll.

So what are your opinions on the legendary film The Matrix? Do you enjoy Keanu Reeves’ acting? Do you think we’re living in a matrix-like simulation ourselves? Leave your thoughts and comments below and don’t forget to subscribe to our podcast simply titled The Force Fed Sci-Fi Movie Podcast.