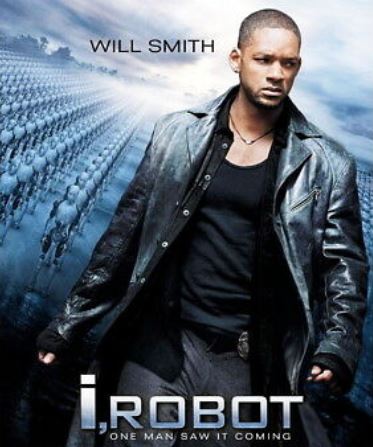 A few weeks ago we got started with one of Will Smith’s sci-fi genre films Men In Black, but this week we watched, discussed, and reviewed another one of his sci-fi films I, Robot! It was interesting to look into the I, Robot series of short stories which the movie is very loosely based off of as well as diving into the I, Robot movie cast, our final opinion on our I, Robot movie review, and a few more topics! Make sure to listen to Chris and Sean on the full podcast episode (especially around the last 10 minutes, I was cracking up listening to them!)! Let’s get going and travel into a futuristic film that shows us what might happen if society relied on robots!

I, Robot Series of Short Stories

I think its appropriate this week to start with the loose origin of the I, Robot film and where some of its components came from.

We don’t think that the I, Robot series of short stories (later compacted into a book) by Isaac Asimov gets enough credit for actually really influencing robotic story-telling themes for years to come within the sci-fi genre.

Ideas like the positronic brain that are part of Asimov’s robots made its way to popular culture. Most prominently known would be Data in the series Star Trek The Next Generation.

In general, Asimov brought a lot of attention to the theme of robotic psychology and behavior (or robopsychology) with his short stories and character of Dr. Susan Calvin, who is termed as a robopsychologist. This theme has continued on and is prevalent in many story-telling media involving robots.

However, the most used idea in popular culture that came from Asimov’s stories whether you realize it or not, are his three laws of robotics.

I, Robot and the Three Laws 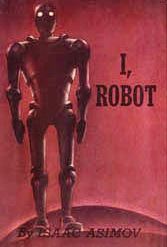 I, Robot and the three laws of robotics that are showcased in the film are indeed originally from Asimov’s I, Robot series of short stories. These include:

We may not see a robot in popular culture specifically address these laws directly, but the underlying themes are there. How many times have we seen at minimum be told that no harm should come to humans as it is wrong to inflict pain injury to someone (although, sometimes the robots evolve like in this film and move beyond this rule deeming it necessary at some point).

Hopefully, by reading this and by now you realize what kind of influence Asimov and his writing had on the robotic sci-fi genre and appreciate the work he provided the world.

The I, Robot Movie Cast

Will Smith as detective Del Spooner

Will Smith starting his film career out with sci-fi / action adventure movies was a great move and choice on his part. He continued this trend with this sci-fi film. He does a good job again with his one-line jokes as we pointed out him doing the same thing when we covered Men In Black. We admire the positive ending as well for his character as he grew throughout the film to maybe be accepting of some robots and not continue to be suspicious of them.

Sean and Chris didn’t touch on this character a ton in the podcast episode, only that towards the end of the movie she shoots a gun with her eyes closed and about 10 minutes later is an awesome marksman with a handgun when needing to fight off the swarm of NS5 robots. In my opinion, the character was just average, but she is only a supporting character. I see that this film could have done without the character of Dr. Calvin, but she is the main character in the short stories, so you sort of have to include her I suppose.

On the flip side, Sean and Chris did talk about I, Robot‘s Alan Tudyk and his performance as Sonny and Sonny’s motion capture. Chris pointed out in the podcast episode that character motion capture had not really been used all that much in Hollywood in this much capacity. Tudyk seemed to be the perfect fit too as he has and continues to do motion capture and voice-over work in films and television. And just a side note … Alan Tudyk plays the pilot in the series Firefly and if you haven’t seen it and you are here as a a true sci-fi fan, then you have to watch it (there’s only one season because Fox screwed it all up!). I’m not sure why Sean and Chris have not seen that yet!

Check out this behind the scenes video about Alan Tudyk and his motion capture performance:

The Film’s I, Robot Cars and other Product Placements 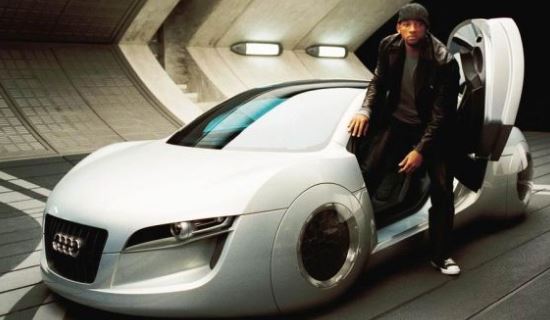 Did you notice the massive product placement in the movie including the film’s I, Robot cars? Audi included their car the RSQ that was designed for the film that Will Smith’s character drives and is demolished in the tunnel scene. The company definitely obtained more exposure for itself by including a big time actor driving a futuristic car of theirs in a big blockbuster film. We wonder how much they had to bid for this product placement though. Do you know by chance? If you do, leave us the answer in the comment section below!

Other obvious product placement included Converse (Chuck Taylors), JVC (music media player), and Dos Equis. Did you catch how much those beers cost when Will Smith and his character’s captain are at the bar? Man inflation must’ve skyrocketed between 2004 and 2035!

Our I, Robot movie review rating comes down to a “Would Watch” on our unique scale. In our podcast episode, we point out that this is a great and classic murder mystery themed film with the inclusion of a great performance of Alan Tudyk as the main robot character Sonny. However, we feel this futuristic sci-fi film overdid it with the computer graphics a little too much. So if it’s ever on television, all of us here at Force Fed Sci-Fi would probably turn it on to watch it to be reminded of this fun and decent film.

So what do you think of the movie I, Robot? Did you think there was too many computer graphic effects? How did you like Alan Tudyk’s performance as Sonny? Leave your thoughts and comments below!