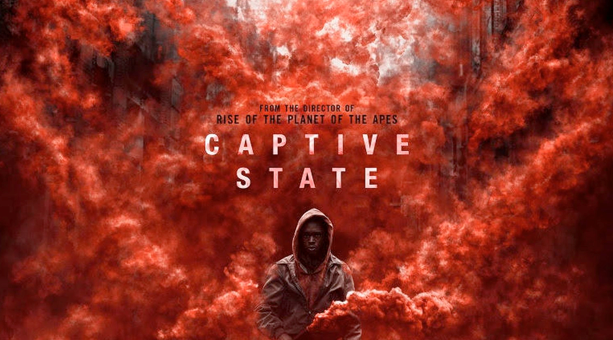 Ready to be alienated by the upcoming Captive State Movie? It definitely looks like a different take on an alien invasion film. For one, we won’t actually witness the invasion, the aliens have already been occupying the earth for 10 years or so in this movie. Let’s discuss and dive deeper though into Captive State.

Haven’t seen the trailer for Captive State it yet? Take a look at it below!

Supposedly, we start at 10 years after the aliens, or legislators it seems they may be called, show up and have taken over. Some have given in to their ruling and dominance, while some remain rebellious. It looks like Mulligan (John Goodman) and Gabriel (Ashton Sanders) are about to begin a revolution though. Who knows if they’ll be successful against a ridiculously technologically advanced alien race? (If you detected sarcasm there, good job)

While I’m not a fan of politics by any means, it’s obvious Captive State is going to subliminally touch on present-day government rule. How much of that am I going to pay attention to? Probably not much. Films for me are an experience to travel to a fantasy world almost (that’s especially true for sci-fi films … wink, wink). However, I’m sure there will be those in the audience that will appreciate the movie’s attempt to address present-day political topics.

Captive State seems like it’s actually going to tell a decent story. The above trailer makes it seem like the film will concentrate more on the main characters and their struggles versus a ‘war-against-aliens’ movie.

In addition and in my opinion, and of course I’m just speculating based off of the trailer, the filmmakers are going to get the setting just right … sort of what the world would look like after an alien invasion and ruling.

While I believe Captive State is going to deliver a quality film and story, I can’t see this film being a hit when it premieres. Of course though, as always, I could be wrong. I do like that they at least got one big name actor in John Goodman to play a main character, but that’s it really. Not that I don’t think Ashton Sanders will do deliver a poor performance, it just helps to have those big stars to appear in films in order to get they hype up. I do believe Ashton Sanders is an upcoming actor who will do well in the future.

So what are your thoughts on the Captive State movie? Do you think it’ll deliver a decent story like I’m predicting? Leave your thoughts and comments below!