This week, the Force Fed Sci-Fi team watched the Doomsday (2008) film, which is another variation of a post-apocalyptic world, focusing more so on the Great Britain part of the world. Unlike our last film we reviewed and discussed, The Postman, where we didn’t get an answer on what caused such a desolate world, at least Doomsday offers the explanation that the “reaper virus” is the cause of such a chaotic society. So join us this week, as we dive into the Doomsday (2008) film, the Doomsday movie cast and characters, and more!

The Writer and Director of Doomsday, Neil Marshall

Other Film and TV Accreditations

Neil Marshall wrote and directed the Doomsday (2008) film. Other projects Marshall has worked on include Dog Soldiers and the critically-acclaimed horror film The Descent. Marshall has also worked on television series episodes such as with Game of Thrones (episodes “Blackwater“and “The Watchers on the Wall“), Westworld (episode “The Stray“), and Netflix’s Lost in Space.

Inspiration for the Doomsday (2008) Film

Marshall intentionally and admittedly took aspects from some of his favorite films and inserted them into this one. The ones we at Force Fed Sci-Fi recognized were Escape From New York, Excalibur, Gladiator, and Mad Max. We appreciate Marshall paying homage to these films, but at some points it felt like it was too similar and unoriginal. More on that later when we cover our thoughts on the ending of this film.

Rhona Mitra as Major Eden Sinclair – Mitra did a nice job at playing the lead role. While there isn’t much depth to her character in this film, but she does well playing a no-fear and confident female leader of a militaristic group while kicking butt.

Adrian Lester as Sergeant Norton – We think Lester and his character Norton didn’t get enough screen time in this film. While there’s a bit of a rough meeting between he and Mitra’s character at the beginning, they form a strong bond, but it seems to be cut too short. However, within that limited amount of time, Norton is given a few decent action sequences. Probably most notably, Norton is given the most honorable death in this film compared to everyone else who is gruesomely murdered with a display of excessive gore.

Craig Conway as Sol – It’s always tough when it comes to characters like Sol in some of these films. Essentially, he is bat-sh** crazy. Most audience members don’t relate to these types of characters, but you have to give Conway credit as he brought a high-level of intensity to the role. You can’t miss him yelling and shouting all of his lines throughout the film, which all come with showers of spit and saliva (and actually we seem to remember him not even having lines in the last action sequence, just yelling and growling).

Malcolm McDowell as Marcus Kane – One of the two most well-known actors in this film is McDowell. His part is limited, but important as he is the one the militaristic group is sent to find since prior to the infection causing post-apocalyptic world, he was a doctor trying to find the cure for the “reaper virus.” However, we soon find that his character just pretty much gave up on all of that and decided to become the leader of a renaissance-like community. McDowell does a decent job at playing his character, but again it is limited. As Sean mentions in the podcast, we will eventually cover him again as he appears in the film Start Trek Generations and we may one-day cover A Clockwork Orange.

Bob Hoskins as Bill Nelson – Hoskins is the second actor in the film we need to cover who is decently well-know (rest in peace). Again though, he has limited screen time as he pretty much gets Mitra’s character ready and on her way for her and her squad’s mission and at the end.

And Rounding Out The Rest Of The Cast…

David O’Hara as Michael Canaris – O’Hara plays some type of senior official within the British government, who the prime minister turns to often for a recommended course of action. When it comes down to it, Canaris becomes the real villain in the film as he has secret alternative motives throughout the film.

Alexander Siddig as Prime Minister John Hatcher – Siddig like a few of the previously mentioned actors, has a minor role as he plays Prime Minister Hatcher. It didn’t seem like he was that great of a prime minister as he was always asking others their opinions and pretty much incapable of making his own decisions. For me personally, I was excited to see him in this film as I don’t see him in much else except for him being apart of my the Star Trek series (he play Dr. Julian Bashir in Star Trek: Deep Space Nine).

Too Long and Ripped Off From Other Films Too Much?

In general, we thought the last action sequence of Sol and his chaotic squad attempting to take down Sinclair in a car chase was a bit too long. We think it lasted around like 15 minutes or so? But don’t quote us on that. Maybe at least it could’ve been cut down 5 minutes or so?

Despite the length of this sequence, it is shot, performed, and overall done well. Of course, we get Mitra’s character Sinclair kicking some major butt again. Not only that though, she does it while driving a sleek and sexy looking Bentley. Although, Sean noticed that at some points the car is scratched up, and then later not scratched up (whoops on the continuity and editing on that! – but not significant to really care about).

The final point in regards to the car chase sequence is we wanted to make was that it was very Mad Max-like. Not a terrible thing to do. As Chris points out in the podcast episode, it’s nice that Marshall honors some of his favorite post-apocalyptic films. Our gripe though is that it was a little too Mad Max-y. It works though, as previously mentioned it’s shot well and the audience can really feel the intensity.

Here is a 2-minute clip of part of that car chase scene to give you a taste of what it’s like in the movie…(WARNING: Profanity Is Used In This Clip)

Lastly, and Chris also points this out in the related podcast episode, is that the very last scene when Sinclair catches up with Canaris and Nelson, the scene is pretty much straight out of Escape From New York. Without going into too much detail, the protagonist records the “bad-guy” saying something the public won’t like so that it can later be released to bring them down (in this case Sinclair records Canaris, then hands over the recording to Nelson for later use).

Hands and Heads Lost: Too Much Gore?

As we’ll get Sean and Chris’ opinions in our rating, we just need to point out the fact of how much gruesome gore is included in this film. We see a decent amount of decapitations, and if you watch this film, pay attention to how many hands are chopped off or crushed. It’s a lot! We couldn’t really find out a reason why (whether it was the director’s choice or not), but it’s very noticeable!

And finally, there’s just so much blood and gore throughout the film as many people (and animals) get killed. Our opinions differed between us here at Force Fed Sci-Fi on this aspect, which I’ll cover in our rating; however, we wanted to point out that it seems like every time someone gets shot, a major artery had to have been hit as blood goes flying and ballooning into the air. It’s excessive and we’ll just leave it at that.

As I mentioned previously, we differed a bit on our opinion’s film. Let’s cover Sean’s take first… 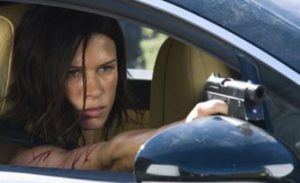 Sean loved this film! He rates it as a ‘Would Host View Party’ on our scale. Why do you ask? For some reason he was a fanatic of the gruesome gore that Marshall included in the film. He also believed that it was shot well, especially the action sequences, and finally, thought the pacing of the film was of good quality.

On the other hand, Chris and I rate this film as a ‘Would Watch’ on our scale. The biggest difference from Sean is that we thought the gruesome gore was too excessive throughout the film and that while paying homage to some of Marshall’s favorite films, he didn’t put enough of his own thought and originality into this film. However, Chris and I agree with Sean that the action sequences were shot well and the pacing of the film was good as we did not feel like we watched a “long” 2-hour film.

Make sure to listen to the whole podcast episode to find out more about how well this film did with its earnings against its budget, our ‘red shirts’ and ‘lens flare’ of the film, as well as Sean and Chris’ debate over the cannibalism scene when the character Sol goes nuts in yet again!

So what did you think of the Doomsday (2008) film? How would you hold up in a post-apocalyptic world that Doomsday depicts? And which hand would you most be willing to lose of you had have one be chopped off? Leave your comments and thought on this film below!