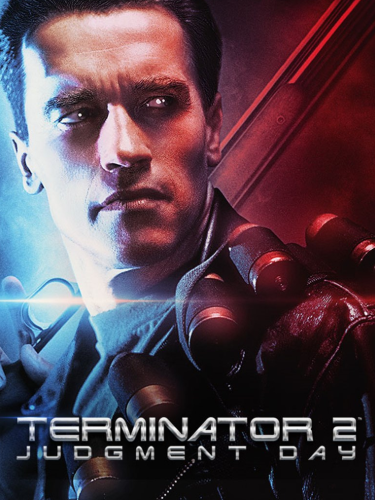 This week, we’re continuing our look into the Terminator franchise by reviewing Terminator 2: Judgment Day. We’ll take a look at the Terminator 2 cast members, best quotes, thumbs up scene, give our own Terminator 2 rating, and more. So let’s dive in as we examine how James Cameron was able to construct a highly regarded sequel. And if you haven’t already, go back to our previous episode / post as we talked about the first Terminator film in depth as well!

While James Cameron, Linda Hamilton and Arnold Schwarzenegger all returned from the previous film, a lot happened for each of them during the time it took to make Judgment Day.

Cameron would direct two of the most well-regarded science fiction films prior to The Terminator sequel between 1984 and 1991 with Aliens and The Abyss, but there was a lot of legal wrangling that took place behind the scenes in order for Cameron to return to make Judgment Day. He originally envisioned the T-1000 a part of the original film, but the technology didn’t exist in the mid 80’s to pull off that look. However, with the effects he pioneered in The Abyss, he was able to bring his vision of the T-1000 to the big screen.

In addition, this could be considered his master class in how to design and direct an action film. The camera work is some of the best seen in the genre particularly during the freeway chase when the T-1000 has commandeered a helicopter and is chasing our heroes as the helicopter passes under a bridge at high speed and catches up to them as a shootout ensues.

The hallway scene where we meet the Terminators is also among one of the best in the film as the T-800 and the T-1000 converge and we figure out who is the villain and who is the protector. The scene then moves to John as he tries to escape down the Los Angeles canals as the T-800 intervenes and saves him once again. The T-800 definitely knows how to help people escape as he easily dispatches the orderlies at the hospital in order to save Sarah and it leads to another spectacular chase scene.

The film is book-ended by solid action in the first and third act but the second act is crammed with exposition that you almost forget they’re being chased by the T-1000. If there is one negative critique we have against Judgment Day, it would be here in this second act where John is trying to instill some personality into the T-800 and Sarah becomes so focused on her mission that she almost murders a man in cold blood.

There are many scenes we can diagnose and break down, but the bottom line is that no matter what criticisms may be leveled at James Cameron, the man knows how to make a great action movie.

Arnold was arguably the biggest star in the world at the time of Judgment Day’s release after starring in films like Commando, Predator, The Running, Twins, Total Recall and Kindergarten Cop between 1984 and 1991. Maybe it was because Arnold had transitioned to playing hero roles or maybe not, but the switch of him playing a non-villainous robot in this film compared to the first one was a good choice for his character, it probably would have been a mistake if they made him the ruthless terminator character he played prior.

Hamilton was not exactly lighting up Hollywood prior to T2, but was making herself known on the small screen by starring on the short-lived, but critically acclaimed television series Beauty and the Beast opposite of Ron Perlman (Side Note: Game of Thrones creator, George R.R. Martin, also wrote on the show), but Hamilton gladly returned to the role that made her a star and turned in one of her more notable performances in her entire career.

Robert Patrick makes his first appearance in the franchise, and really his first big time role, as the new and deadlier Terminator, the T-1000. While there is a long period of the film where his character is absent, this role still remains probably one of his most well-known performances even after a long career of playing unique characters. His only prior major film credit before Judgment Day was playing a terrorist during Die Hard 2: Die Harder, but even in that film his character was short-lived.

This was Furlong’s first movie and was able to translate a lot of the complexities of John Connor as a teenager who has not had stability for the majority of his life and has not had any sort of adult role models or solid parental units to teach and guide him. While Furlong has had a litany of drug and legal issues since 2000, his facial likeness is set to appear in the new film Dark Fate via CGI performance capture.

We felt that while Morton isn’t on screen for very long in this film, he has one of the best arcs as he instantly buys into the mission of destroying his life’s work in order to save the future. Plus, he gets shot A LOT in just a short amount of time. While his character doesn’t make it in the end by sacrificing himself (although he was likely dead anyway), his death scene is acted out well.

Boen returns to the role of Dr. Silberman and is featured during the first act of Judgment Day. He’s still an extremely unlikable character, but of course there are reasons for that.

Michael Biehn actually returned to this film in a cameo appearance as Kyle Reese during a dream sequence with Sarah Connor but this scene was ultimately cut from the theatrical release.

No, not quite time for our Force Fed Sci-Fi rating of this movie. This is in reference to the scene towards the end where the T-800 gives John and Sarah a thumb-up. Some may say it’s cheesy, but with the a somber version of the main Terminator them playing, and the T-800 destroying itself while John and Sarah have to watch, it’s kind of deep and emotional. This quick shot is recognized in other films too, like Ready Play One.

As well-received as the first Terminator film was, Judgment Day completely blew away any and all expectations. It would end up becoming the highest grossing film of 1991 against other heavy hitters like Beauty and the Beast, Robin Hood: Prince of Thieves, The Silence of the Lambs and JFK.

It would end up winning 4 Academy Awards (Best Sound Editing, Best Sound Mixing, Best Visual Effects and Best Makeup) which we felt like were all deserving awards. This film would also inspire a ride at Universal Studios, T2: Battle Across Time which would run for over 20 years.

More so than the first film, Judgment Day has been parodied in different films across many different genres including another Schwarzenegger film Last Action Hero, the legendary comedy Wayne’s World and a well-reviewed animated film The Lego Movie. It’s also received tributes in episodes of The Simpsons, Family Guy and American Dad. However, while the first film was selected for preservation in the National Film Registry, Judgment Day has not been selected yet, but we feel this is an honor that Terminator 2 may eventually get.

This sequel would also be followed by three more movies that were not as well-received as the first two films. We think that Terminator 3: Rise of the Machines and Terminator: Genisys are simply mediocre films and the rest of the series seems to simply repeat the action scenes from the first two films. Also, it doesn’t help that the fourth film in the series, Terminator Salvation, is more famous for the on-set rant from the film’s star Christian Bale.

We mentioned that this film has been parodied in a wide-variety of other mainstream media. Some of the lines in this film, pretty much all by Arnold’s character, are some of the best quotes in cinema history:

These quotes and others are some of the best and memorable, and we think part of the reason that is, is because of Arnold’s great delivery.

A quick look at the “Hasta La Vista, Baby” scene in the film:

We differed slightly on our reviews and ratings for Terminator 2: Judgment Day, but not by much. On our show’s unique scale, Sean graded Judgment Day as a WOULD OWN citing that while this film doesn’t have the same tone as the first, it’s a good film in its own right and is a great action film. Chris called it a WOULD HOST A VIEWING PARTY, but for mostly sentimental reasons as he recalled memories of watching this film with his father as a child and even went as far as calling it a desert island film for him.

So, what did you think of Terminator 2: Judgment Day? Do you agree with our ratings? How do you feel about the action scenes? Is the second act as slow as we think it is? Listen to the full episode to hear who we picked for our Red Shirt as well as our Lens Flare. Don’t forget to listen, rate and subscribe to the podcast show and watch the feed soon as Chris and Jeremy will sit down and provide their review for the new film, Terminator: Dark Fate.