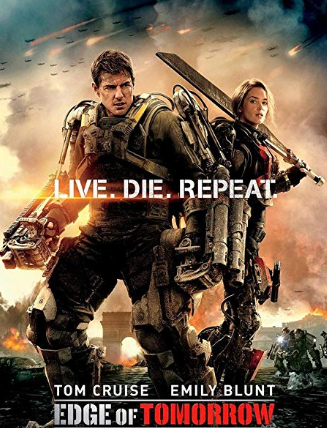 This week, we don our exo-suits once again and face off against time traveling aliens as we take a look at Edge of Tomorrow, or Live. Die. Repeat. – whichever you prefer. We’ll discuss the movie cast, sequel that is supposedly in development, and give our own movie review, and more.

Directed by Doug Liman: Prior to directing this film, he was well-known for directing The Bourne Identity and Mr. and Mrs. Smith so his style of directing definitely lends to quick, but memorable action. It’s hard to quantify just how much influence a director has in the final product but Liman leaned heavily on his special effects to pull off the look of the Mimics as well the opening invasion scene.

Tom Cruise as Bill Cage: Thanks to his big-time reputation in Hollywood, Cruise is one of the few actors who can deliver a box office return on name alone and we feel like he delivered one of his more nuanced performances as Cage does not immediately start out as an incredible warrior. He’s a public relations man who’s never seen a combat zone and is thrust into the largest invasion in history when he disobeys a direct order from his general and is shanghai-ed into service. When he’s killed during the invasion, he gains the ability to loop back in time, gain abilities and seeks to kill the Mimics once and for all.

Emily Blunt as Rita Vrataski: In many ways, Blunt’s character is superior to that of Cruise’s. At one point, she gained the time looping ability during a battle at Verdun where she gained the moniker of “The Angel of Verdun” and by the way of montage, she begins to show Cruise the ropes and he begins to gain confidence in using the exo-suits. Later in the film, she and Cage develop feelings for each other, but it’s to maintain a storyline given the nature of the film and the time looping. We’d be okay if a sequel focused on Vrataski and left Cage on the sidelines.

Brendan Gleeson as General Brigham: While Gleeson comes to this film with an impressive pedigree, we weren’t entirely convinced that he knew what type of film he was in. He plays his role completely straight laced especially in the scene where Cage and Vrataski give him the rundown of the invasion of the piece of equipment they’ll need to locate the main Mimic boss, the Omega. We don’t see a ton of Gleeson in this film as he’s in the opening scene meeting Cage and then again during that final meeting.

Bill Paxton as Master SGT Farell: We’d be remiss if we didn’t mention the late and great Bill Paxton who notched another entry in his resume before his death in 2017. His character reeks of cliché, but this is alright with us. We feel that if a film is going to go for clichés then it’s best to embrace them and run with them. Paxton definitely borrowed a good portion of his performance from that off R. Lee Ermey and his performance in the Stanley Kubrick classic Full Metal Jacket.

The cast is rounded out with several Game of Thrones alums with Tony Way (Kimmel) and Noah Taylor (Dr. Carter).

Edge of Tomorrow Development and Filming

We were surprised to learn that this film was based off a Japanese light novel titled All You Need is Kill and plans had been in motion since 2010 to develop this into a major motion picture. Like many other films we’ve discussed, this one has an interesting production cycle. While Doug Liman was hired on as director early on, Brad Pitt was initially approached to star as Bill Cage and when he passed on it, the role went to Cruise.

The script changed hands numerous times with Dante Harper originally being tabbed to write the screenplay and then it went to Joby Harold and it then transferred to Star Trek writers Roberto Orci and Alex Kurtzman. With six months left before production began, the Butterworth brothers, Jez and John-Henry were brought on to re-work the script and Simon Kinberg eventually took over for them and finally, Christopher McQuarrie was brought on to finish the draft and get the script to production before they ran out of working writers in Hollywood.

While Cruise is known for doing his own stunts in his movies, he had to undergo additional training in order to properly perform in the battle suits as the models weighed between 85 and 130 pounds. Emily Blunt underwent three months of training in Krav Maga, yoga and aerial work in order to effectively pull off her stunts. We always appreciate when actors put in the extra time and effort to make their performances look great and their hard work definitely paid off in this film.

Throughout the marketing of this film, it was billed as Edge of Tomorrow; however, upon close inspection of the film’s poster, this appears to be the tagline of the film as Live.Die.Repeat is shown prominently in the middle of the poster. The trailers and commercials were guilty of this as well and audiences couldn’t quite figure out exactly what was the title of the film.

Edge of Tomorrow Aliens: What’s the deal with the Mimics?

For starters, these are some of the most vicious aliens you could find in a film, but their objective remains unclear throughout the film. Dr. Carter speculates that they’re on the hunt for resources or they’re part of some advance force in order to colonize and take over the planet. As mentioned, this is simply speculation and since the Mimics don’t speak, we’re left to wonder just what exactly they are looking for by coming to Earth. However, they move quickly and they are unrelenting in how they kill humans. There is a definite hierarchy with the Mimics as the Omega appears to be in charge of all of them and works closely with the Alphas.

There have been plans to develop and make a sequel to this film. As mentioned previously, the title is most likely going to be Live. Die. Repeat. And Repeat. as suggested by the director, Doug Liman himself. However, the most recent news is that the schedules of Tom Cruise and Emily Blunt have not lined up as both have expressed they are more than willing to make a sequel. In addition, we wonder where the story could go. Does Cruise’s character of time traveling abilities now? Is the alien invasion really done? It will definitely be interesting to see where they take the characters and the story from the end of this film.

Our podcast host Sean gave this film a Would Watch on our scale, while Chris (and I, Jeremy, agree with him) gave this film a Would Own. It takes the premise of one of the most original films ever made with Groundhog Day and adds its own unique twist to the story. The action and visuals are great and the film is easy to follow along. In addition, the audience can tell that the actors put in extra effort and care in crafting a great movie.

What did you think of Edge of Tomorrow aka Live.Die.Repeat? What title do you prefer to call the movie? How did you feel about Emily Blunt killing Tom Cruise more than the Mimics did? Is the love interest between her and Cruise shoe horned? What would you like to see in the potential sequel? Let us know what you think and please listen to the full episode and subscribe in the meantime!