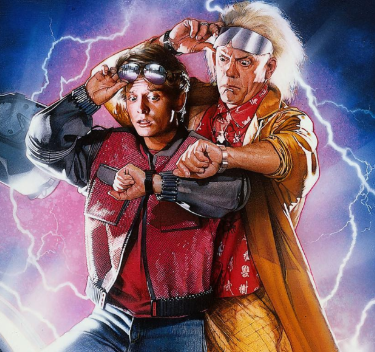 This time, we’re returning to a franchise we covered in the early days of the show with Back to the Future Part 2 and along the way we discuss what the rules for a sequel are, how this film nailed some predictions yet got 2015 so wrong, and how Crispin Glover, the weirdest man in existence, managed to forever change Hollywood. Let’s dig in…

Back to the Future Part II Cast and Crew

With a couple of exceptions, the entirety of the cast and crew returned to produce Part II.

Back to the Future 2 Special Effects: I Knew it was a Fake Shark

For the time of the film’s release, the special effects are incredibly advanced. For starters, it took the production design almost two years to build the sets.

The production designer, who had previously worked on Blade Runner, undertook the project with a personal goal of making Part II look nothing like Blade Runner. If you’ve seen Blade Runner, you know that it is a very dark and sleek yet it has an edge to it.

The team was given a blank canvas to do what they wanted, but there are differences between the Hill Valley square shown in the first film to that of the second film. Notably, the addition of the garden and fountain in the center and beefing up the technological advances are visible on-screen.

One big addition to the film was the introduction of the Vistaglide system. The Vistaglide camera system enabled Zemeckis to insert the same actor at different points in the same scene. Hence why we see two Michael J. Fox’s playing Marty McFly Sr. and Marty McFly Jr., as well as Thomas F. Wilson playing an older Biff Tannen and a character named Griff in 2015. While these type of scenes existed prior to this film, the new Vistaglide system allowed for camera movement and dynamic action in these scenes.

Introduced in the final moments of the first film, Doc had modified the Delorean to fly and that also had to be included in Part II. The Delorean exclusively flies in this film and it’s disguised rather well that you hardly notice it. There are many modern films that should take a cue from the example set by Back to the Future Part II.

Back to the Future 2 Predictions: Did the Film Get 2015 Right or Wrong?

One type of category Back to the Future predicts is their vision of 2015 technology,  when Doc brings Marty and Jennifer to the future to help out their children. Some of the technology portrayed in the film we saw in the real 2015.

For starters, omnipresent cameras that capture your every move, drones, flat-paneled televisions mounted on walls, video chat systems, hands-free video games, wearable technology, fingerprint scanners and secure electronic payment. Even the inclusion of cars that run on bio-fuel came true as well as the rise of the popularity of 3D films.

Obviously, we don’t have flying cars, but the cooler technology shown like the power laces and self-adjusting jacket is plausible. Nike actually filed a patent for self-lacing shoes back in 2009 and actually took it to market in 2016, but it was made in limited quantities and there’s been no word on whether the company will make more in the future.

The hoverboard shown in the film also seemed to be a far off dream as the current market product is more of a misnomer as they don’t actually hover above the ground and requires the user to self-balance on the board.

In the film, it’s also shown that the Chicago Cubs won the World Series in 2015 and this in turn inspires Marty to purchase a Sports Almanac to try and make some money in the past. In real life, the Cubs almost made the World Series in 2015, but were knocked out by the New York Mets. The Kansas City Chiefs would win the title that year, ending a 30 year championship drought for the team.

Interestingly, the next year in 2016, the Cubs would win the World Series in dramatic fashion following a Game 7 comeback against the Cleveland Indians. It would’ve been nice if the movie could manage to pull off the biggest prediction in the film, but since the team was given the direction to simply go nuts with their predictions, it’s no wonder they went as far out as they did.

As mentioned earlier, Crispin Glover was not asked to reprise his role of George McFly from the previous film.

There’s been a lot of speculation as to why he didn’t return, from Glover claiming that he was offered a paltry salary compared to what other actors received on the film, as well citing he had “philosophical differences” with the producers over what the message of the film should be.

The producers of the film have refuted Glover’s claims that he was underpaid, but there are also rumors than Glover fancied himself to be the next Marlon Brando. When you’ve earned the accolades that Brando has earned, then you can command Brando-esque respect.

With Glover fired from the production, Zemeckis cast Jeffrey Weissman to fill the role, but was fitted with nose, ear and face prosthetics to make him look more like Crispin Glover. In addition, Zemeckis used camera tricks like hanging him upside down, putting sunglasses on his face, and placing him in the background instead of the foreground.

In retaliation, Glover filed a lawsuit against the producers of the film on the grounds that they didn’t own his likeness nor had permission to use it. As a result of his lawsuit, the Screen Actors Guild collective bargaining agreements have clauses stating that filmmakers are not allowed to use those methods to reproduce the likeness of other actors.

It’s weird to think that the man who almost kicked David Lettermen in the face is the same man who helped changed Hollywood contracts. Maybe if he didn’t let ego get in his way he could’ve had a bigger career. He’s since developed a reputation as being notoriously difficult to have on set. There’s a famous story from when he was filming Charlie’s Angels that he simply refused to say his lines and the filmmakers simply decided to proceed hence why his character is silent for the first and second films in that series.

Legacy of The Back to the Future Franchise

Back to the Future has since become one of the most beloved sci-fi franchises, but this film was not as well received as the first. It didn’t gross as much as the first film and critics were not as high on this one as they were on the first. Part II did manage to win a couple of Saturn Awards as well as receiving an Academy Award nomination for Best Visual Effects. It is a solid addition to the series, but maybe the series would’ve been better if a sequel was set several years after the events of the first film, unfortunately, we’ll never know.

We rated the first film very highly when we reviewed it back in the early days of the podcast, and Part II was no exception as our hosts both rated it a WOULD HOST A VIEWING PARTY on our unique scale. While it doesn’t have the same thrills as the first film, why would anyone go into a sequel expecting to see the exact same as the previous film?

What did you think of Back to the Future Part II? Should Jennifer have played a larger part in the series as a whole? Did 2015 live up to your expectations? Tune in to the episode where we discuss our Lens Flares and lack of Red Shirts. Please listen, rate and subscribe with your favorite podcast feed and tune in next time when we return to the Marvel Cinematic Universe to review 2015’s Ant-Man starring Paul Rudd!