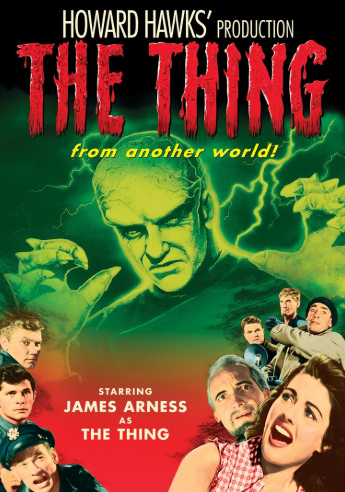 This time, Force Fed Sci-Fi takes a look at an overlooked classic in The Thing From Another World (1951 film) and discussed during our review about how problematic an author can truly be, why American history from the 1950’s provides context for the film, and does this film actually surpass its subsequent remakes? Let’s dig in and find out…

Differences Between the Film and Novella

It’s important to note that this film is based on a novella originally titled Who Goes There? by John W. Campbell and let’s just say there were many differences between the source material and the final product:

In addition to the notable differences between the novella and the film, the author Campbell, wasn’t exactly the nicest of people. He is described as taking the “devil’s advocate” approach to many topics and had many problematic views on slavery, integration and the Civil War.

He was also a notorious chain smoker and even disputed the link between smoking and lung cancer and even embraced many branches of pseudoscience in the hopes of expanding medical discovery.

He also wrote and glowingly praised the historical (villain) L. Ron Hubbard and began to experiment in Dianetics. Let’s just say Campbell was problematic to say the least.

At The Time of the Film..

The Thing From Another World was released in 1951 and it’s important to understand the American cultural lexicon at the time.

The Korean Conflict was just ramping up and would end in a stalemate a few years later. This was a serious blow to American morale as we were coming off a victory lap following World War II and would affect our fighting forces for years to come.

The McCarthy Hearings on Communism were being televised across the nation and would abruptly end when Senator McCarthy was called out during a now infamous hearing with the quote “Have you no decency, sir?” and his reputation ruined following numerous reports by now legendary journalist Edward R. Murrow. For further context on the McCarthy Hearings, we definitely recommend the film Good Night and Good Luck.

In addition to these historical events, Hollywood was ruled by what has become to be known as the Hays Code, a set of self-governing rules film studios went by in order to make their films as non-offensive as possible. For a complete breakdown of the rules outlined in the Hays Code, check out this link here or make sure to listen to our podcast episode.

Basically, every film produced in Hollywood from the 1930’s to the late 1960’s followed this code and was eventually replaced by the rating system we know today. Interesting side note though, the first film to receive a PG-13 rating was the 1987 Cold War film, Red Dawn following the suggestion of Steven Spielberg. In hindsight, the Hays Code can be seen as censorship, but films did not receive the same type of releases we see now. Many films were boycotted regionally and the Code was a way of assuring that films could enjoy nationwide releases.

As mentioned at the top, The Thing From Another World spawned several remakes. One was released in 1982 and the other in 2011.

The 1982 remake, directed by John Carpenter, is considered to be one of the greatest horror/science fiction films of all time (and a personal favorite for our host Chris). It manages to closely follow the original source material more so than the 1951 version.

The 2011 film serves as a prequel to John Carpenter’s The Thing and was less than well received by critics and audiences. While it’s essentially a rehashing of plot elements and characters from the 1982 film, it does answer a few unknowns that the ’82 version caused.

Who Directed The Thing From Another World (1951)?

One of the persistent questions that has remained since the release of The Thing From Another World has been who was the actual director of the film?

While Christian Nyby is credited as the man in the chair, there has been speculation that famed director Howard Hawks served as the behind-the-scenes director. Nyby weighed in on the controversy in 1982 claiming it’s one of “the most ridiculous questions I’ve ever heard”.

Nyby studied under Hawks and learned how to direct from him so it makes sense that his film would be in the style of a Howard Hawks film. We speculate that while Hawks served as a producer on the film, he probably gave Nyby plenty of guidance and story suggestions during production. Regardless of who actually served as the director, they still managed to craft a memorable film.

Nyby and Hawks’ career diverged in the future. Hawks went on to direct films like Gentlemen Prefer Blondes, Rio Bravo, El Dorado (which is problematic for its own reasons) and Rio Lobo. Nyby would direct television episodes for many legendary shows like The Twilight Zone, Perry Mason and Gunsmoke. It seems Nyby enjoyed working with James Arness, as he starred as The Thing in the 1951 film we are discussing today and went on and played the main role in the TV series Gunsmoke, as Marshall Matt Dilllon for over 20 years!

The 1950’s was a prominent decade for many, now legendary science fiction films including The Day the Earth Stood Still, The War of the Worlds, Invasion of the Body Snatchers and Forbidden Planet. Yet somehow, The Thing From Another World continues to be overlooked.

It was the highest grossing sci-fi film of 1951, even out grossing the aforementioned The Day the Earth Stood Still. It was also selected for preservation in the National Film Registry by the Library of Congress in 2001.

Our host Chris believes that it’s potentially overlooked because the 1982 surpassed it in many ways, both in terms of story and tone.

However, it’s important to shed light on a film like this so future generations can watch, enjoy, and appreciate it.

Utilizing the unique rating scale from Force Fed Sci-Fi, we differed slightly in our final rating. Sean rated the film as a WOULD OWN citing that while the film does fit right in his wheelhouse, he wouldn’t want to “subject” anyone else to having to watch it and calls films like this part of his “secret passion.” Chris rated it as a WOULD WATCH saying that the 1982 remake is a superior film and this film is overlooked due to the sheer volume of classic and genre creating films from the 1950’s.

What did you think of The Thing From Another World? Were you a fan of the giant carrot chasing around the soldiers and researchers? Listen to our full episode to hear who our Red Shirts and Lens Flare were and please rate and subscribe!

Our next film to be discussed and reviewed will be the first film of the final Skywalker trilogy (that was confusing) … aka Star Wars: The Force Awakens. Sean, Chris (and possibly producer Jeremy) will be reviewing the new Star Wars films in anticipation of The Rise of Skywalker in theaters on December 19th/20th !