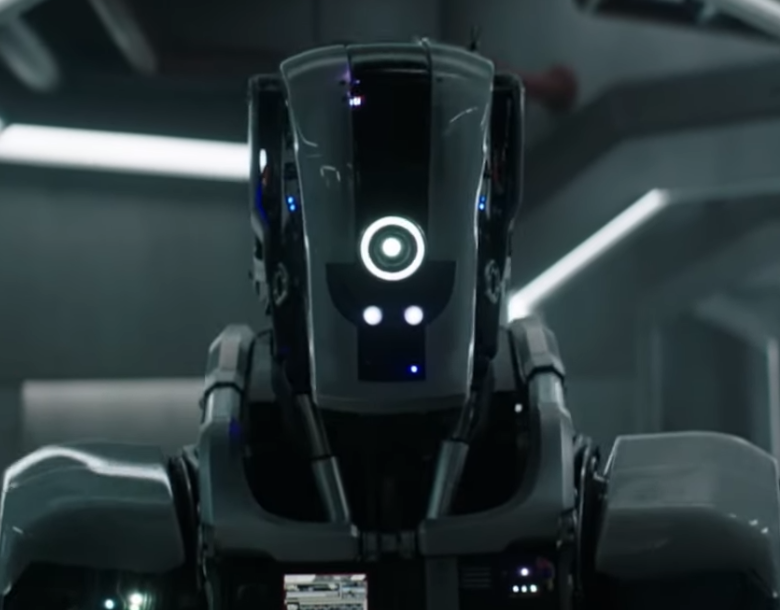 On this edition of Force Fed Sci-Fi, we took a look at and reviewed the Netflix film, I Am Mother. Among many things, we debated about how the world ended in this film, is society simply allowing technology to raise our children and just how freaky is that underground base? Let’s jump in and begin….

I Am Mother Cast and Crew

As far as we can tell, this is the only major film that Sputore has directed. His only searchable credit was an Australian television show where he directed several episodes, but for his first time in the director’s chair, he did a fairly decent job. While the concept may have been a bit too ambitious for him, we’re hoping to see more of him in the future.

Rugaard is another newcomer to the scene with not many credits to her name other than several Danish television shows. She brought a certain grace and naiveté to the film as her character has been sheltered for her entire life without any knowledge of the world beyond their bunker. Surprisingly, she
outperforms the other two actresses in this film.

Technically, she was only the voice of Mother and Luke Hawker was the physical stand in during filming. She voices Mother as very even keeled and matter of fact, but that’s almost a given considering she’s voicing a robot. She has an accomplished resume, and while this is a fair performance, it’s not going to be a role that’s to notable on her resume.

The two time Oscar winner brings her acting skills to this film … kind of. As mentioned previously, Rugaard outshines her counterparts in many regards in I Am Mother as we get no real insights into her background – how did she end up on the beach in a shipping container or who shot her near the beginning of the film? It’s
hard to connect to a character when we don’t know much regarding their backstory, but of course we can’t always blame the actor/actress as some of the blame can be put on certain crew members.

For Starters, What Happened in I Am Mother? (a bit confusing…)

I Am Mother mostly takes place in an underground bunker where the no-name daughter is being cared for by a robot simply known as Mother, but a question that our host Chris brought up in the podcast episode is how did this world come to be the way it is?

It seems like there was some sort of cataclysm, but it is not immediately clear as to exactly what the event was – was it war, famine, a combination of both?

We don’t find out until later in the film that Mother is part of a larger entity that was created by the military. Was its true purpose to really re-create humanity in the event of destruction? We’re pretty sure that Mother and the robotic entity Mother is associated with eventually turned on humanity which, sounds eerily familiar to us but we suppose this idea isn’t exclusive to The Terminator.

Set Production and Its Contribution to the Film

The underground bunker does look great on film and the production design team deserves a lot of credit for what they accomplished, but the layout of this facility isn’t exactly clear. There’s an expansive living facility for all of the humans that will be grown and what we assume is a very large warehouse for storage, but there is also medical facilities and classrooms.

The hallways are extraordinarily long, like Stranger Things season three long, and maybe a vehicle of some sort would have made navigating this facility a bit easier.

The facility itself provides insight as to how far technology has come in the future. We see babies being grown in just a day and advanced medical equipment to diagnose almost immediately to determine what is wrong with a potential patient.

It is an interesting juxtaposition to see how advanced the bunker is compared to how simply Hilary Swank’s character is living. After escaping an underground facility of her own where the inhabitants turned to cannibalism to stay alive, she continues to live simply on a beach in a shipping container that washed up on shore from a nearby cargo ship. Her home is full of items from her past life and she has somehow adopted a dog in the midst of the apocalypse (although that dog is in one scene and then disappears). It’s not clear how she’s managed to find anything to eat in this world, but maybe not all questions from this film need to be answered.

One of the Film’s Themes: The Complexities of Motherhood

One of the items we discussed is the role that technology is playing in educating our children in today’s world as Mother had to rely heavily on technology to teach daughter in the film.

We all agree that it’s important to limit the amount of screen time a child is seeing up to a certain age as long as it’s an educational program. However, there is a great value in a parent teaching a child a skill or reading to them every night to instill some self-sufficiency skills as opposed to relying on a computer to teach a child.

As previously discussed on the show, any sort of advanced robotics will require a massive amount of coding and Mother is no exception to this. Mother is capable of knowing when to feed a child, change it or when it is cold and is able to teach Daughter complex concepts such as medical techniques and philosophy/ethics.

Summary of the I Am Mother Ending

In the end, Daughter doesn’t utilize any of the lessons Mother has taught her and instead opts to do the right thing when she’s given the chance to raise her little brother in a world free from the rule of Mother.

In spite of everything Mother tries to impart on Daughter, she chooses her own morality and will live out the rest of her life while trying to raise her brother.

Throughout the film, both Woman and Mother are preying on Daughter’s naiveté into helping them for their own purposes. Woman is shot by unknown parties and manipulates Daughter into helping her and compromising the security of their bunker while Mother is withholding information about who actually shot Woman.

They both end up on the outside looking in (literally) as the only way Mother will leave Daughter alone is if she kills the robot and shuts her out of the bunker. The Mother entity then goes to find the Woman and while her fate is left unknown, it’s safe to assume that Mother kills Woman.

The one thing we can really commend this film for is the production of the bunker as well as the design of Mother’s robotic suit. However, many other aspects of the film are honestly just average. While the story is an interesting concept, we felt that the deception of Mother and Woman was dragged out for too long – the whole movie the audience is just wondering who is trustworthy and who isn’t (kind of gets old). In addition, the newcomer actress in Clara Rugaard manages to outperform an Academy Award winning actress. In the end, both Sean and Chris give this film a Would Not Watch rating on our scale; however, Jeremy, our producer, does feel this film deserves at least a one-time watch, as he felt the psychological aspect of this film, mostly referring to Rugaard’s character, was intriguing.

So what did you think of I Am Mother? Did you agree with our choice of Red Shirt or our
Lens Flare on our podcast episode? Will you add this to your Netflix queue after listening to our episode or reading our review?

Please listen for our full breakdown as well as our movie for next time and as always, please rate and subscribe on your podcast application of choice!