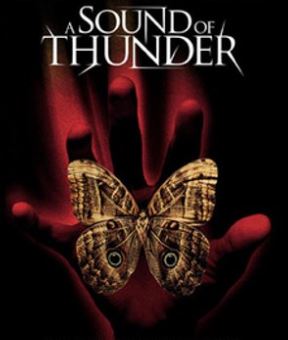 Differences Between A Sound of Thunder Short Story and Film 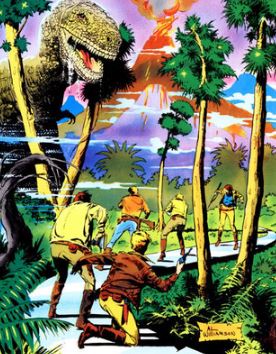 There are several differences between the A Sound of Thunder film and short story (written by Ray Bradbury).

Some of the subtle differences that didn’t impact how terrible the movie turned out included:

Some of the HUGE differences that did impact how terrible the movie turned out included:

Essentially, there’s a better story in the short story itself than there is in the film.

$80 million was budgeted for this film; however, Franchise Pictures went under investigation by the FBI for fraudulently inflating their budgets on their films. This all happened around the time A Sound of Thunder was being developed. As a result, the real budget came down to $30 million as that is all that the investors could provide for the film. Essentially, Franchise Pictures went out of business during post-production of this movie, surprise surprise!

One of the worst graphics we’ve seen in a film

As the amount of funding and actual budget went down, the computer graphics in this film were crazy bad! Words cannot describe how many effects were done terribly. Since words cannot describe it, maybe this clip of the Allosaurus can give you an idea of the quality of computer graphics infused in this film… (it looks like SyFy channel movie of the week to us honestly) …

A Sound of Thunder Movie Cast

Edward Burns as Travis Ryer: This character was actually originally going to be played by Pierce Brosnan. However, if you keep reading, you’ll see why Brosnan left the project. Burns played Travis Ryer instead who is the leader of the safari journeys to the past and when things go haywire, he goes on to attempt to fix the time waves that have changed the present, all the while he tries to keep himself and his team alive. We sort of felt like as the movie went on, Burns didn’t really care about how great of a performance he gave in this film, it almost seemed like he stopped caring as he realized how bad of a film this was going to turn out.

Catherine McCormack as Sonia Rand: Rand apparently is someone who was fired or casted out of the time safari company as she had concerns over what was being done. Eventually, McCormack’s character catches up with Burns’ character as she explains to him how the stepped on butterfly is going to cause evolutionary changes via time waves. As things go, at least she embraced the roll a bit more than Burns, but it wasn’t a phenomenal performance that the audience got to see.

Ben Kingsley as Charles Hatton: This character is the one who is in charge of the time traveling safari facility in the movie and is in the business of making money, not surprising. This is a character that is not in the short story. We weren’t impressed with Kingley’s hair (well I suppose Sean mentions that he likes it a bit in the podcast episode), but he has odd hairstyles in a lot of his movies. Luckily, since Kingsley does have great film credits, this movie didn’t derail his career all that much.

A Sound of Thunder Movie Crew

Peter Hyams directed this movie and was actually not the original choice. Now Hyams had directed … average films in our opinion like Timecop (which I actually am a fan of), The Relic, and End of Days. The original director was going to be Herbert Ross who has done a few popular films like Steal Magnolias and Footloose. However, Ross apparently got into a debate and argument with the original story writer Ray Bradbury. As a result, Ross was let go from the project. This led to Pierce Brosnan leaving the project as he was only willing to work with Ross as director. We think this film actually would have done well with Ross as director and Brosnan as being cast as Travis.

If you can’t tell by now, we here at Force Fed Sci-Fi did not think highly of this movie. We’ve done this once before and we have to do it again, but we give this film on our rating scale, and it’s actually not on our rating scale officially yet, a rating of “Would Erase From Memory.” Sean takes it one step further (figuratively speaking) saying he would burn or break the copies of the blu-ray or dvd if he saw them in the store … nice one Sean! (we really wouldn’t do that and don’t condone that behavior by the way, haha) Unfortunately, this film had bad luck and almost everything went wrong: losing the original director, losing the original lead actor, and losing a big chunk of funding for the budget of this film. This resulted in confusing and inaccurate science, underwhelming graphics and special effects, and acting performances that were at best subpar. Finally, they should have carried over more elements from the short story than they originally did, we think this film did not do its job in preserving the classic short story of A Sound of Thunder.

There you have it! A piece of junk film that we recommend you never watch unless you want to see how not to make a film. Make sure to listen to Sean and Chris on the whole podcast episode regarding this film, and rate and review us on your preferred podcast app/service if you have time!