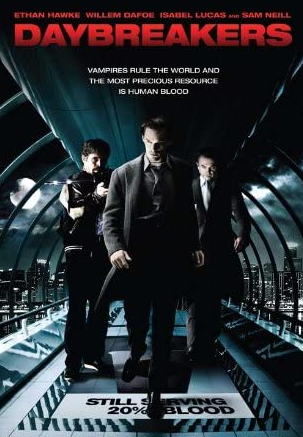 This time, we discuss yet another Ethan Hawke film with a Daybreakers film review and along the way we ask, how can the Spierig Brothers have major issues with big pharma, why does this film disregard literal centuries of vampire lore, and is Ethan Hawke really half-assing his job as an actor? Let’s dig in….

Written & Directed by the Spierig Brothers: The Brothers have firmly placed themselves as working exclusively in the horror genre including this film as well as Predestination (also with Ethan Hawke), Jigsaw and Winchester.

Starring Ethan Hawke as Edward Dalton: We’ve previously discussed the early career of Hawke in our past episode reviewing Gattaca. He had a great career following the release of that film and had major clout heading into Daybreakers. It’s rare for him to take on a genre film of this type, but he’s also starred in the remake of Assault on Precinct 13.

Willem Dafoe as Lionel “Elvis” Cormac: As our podcast hosts observe, many people of their generation became aware of Dafoe following his performance as Norman Osborn/Green Goblin in the original Sam Raimi Spider-Man films, but Daybreakers isn’t a film for him to lean on in terms of strength of his acting career. He’s done a good job of redeeming his career following Oscar nominated performances in The Florida Project and Eternity’s Gate as well as turning in an acclaimed performance in The Lighthouse.

Sam Neill as Charles Bromley: While many would argue Neill’s peak was in Jurassic Park, he’s managed to turn in solid performances since that release. There was a great opportunity for Neill to be a great villain in this film and is instead reduced to Bond villain type tropes.

Daybreakers Movie Summary: A Reflection of Our World?

As we discuss in the podcast episode, living during a pandemic certainly helps to change one’s perspective of this film. No one in 2009 could’ve imagined a global pandemic that would affect everyone and force us to confront a new reality.

In Daybreakers, a global pandemic has changed the majority of the world’s population into vampires and the population was quick to accept the new normal and discard the old ways of humanity. However, even though this world is dominated by vampires, we still see some reflections of our world including freak outs in coffee bars as well as a critique on big pharma and the healthcare for profit system.

Right away, we see the effects of addiction when a homeless, starving vampire is dragged away to an unknown fate as well as the introduction of the subsiders which, are vampires who have become so desperate for blood that they have started drinking their own blood. We also see the rich, corporate elite controlling the research and ultimately use the medicine that would only enrich themselves as opposed for the greater good.

In the end, Edward’s colleague has a breakthrough regarding the blood substitute he was working on earlier in the film, but at the same time, Edward has developed a cure that will turn the vampire population back into humans. However, his colleague wants to prevent him from releasing the cure as it would give him wealth and power in this world. On the flip side, due to the nature of the cure Edward developed, he’s able to give it away for free just through the act of other vampires biting him and drinking his blood.

We also see the futility of humanity and their struggle in the second half of the film. The vampire army which isn’t exactly an army, but instead it’s more of a hunting party as their sole purpose is to track humans and imprison them for eventual feeding and killing.

We also debate the need for an “army” in this film as the only resource worth fighting over now is blood and the “army” is just used to capture humans. Edward is brought to a group of human survivors who have attempted to turn to politics to help mediate the divide between the surviving human population and the ruling vampire class. Although, this is for naught as Edward, Elvis and Audrey find their politician friend and their remaining human friends slaughtered in a remote cabin.

Throw Out the Baby with the Blood Water

While Daybreakers is obviously a vampire film, it manages to disregard centuries of lore that came before it and tries very hard to establish its own lore and history. Bram Stoker’s Dracula has remained the gold standard of the vampire subgenre and remains the quintessential story every vampire story aspires to be.

Dracula has also managed to evolve over the years including a recent miniseries on Netflix that released in early 2020 as well as many remakes and tributes since the release of the original film starring Bela Lugosi. However, horror films in the late 2000’s were not on the same level as horror films in the 2020’s and vampire films can be partially blamed for the decline of the genre.

In the mid 2000’s, there was a book series that was immensely popular in the young adult genre and these were the Twlight books. As many are familiar with (even if you haven’t read or seen the films), these books featured a vampire who’s permanently stuck in his teenage years falling in love with a beautiful human woman and they struggle to coexist in each other’s world. Film adaptations soon followed the success of the books. While these films found box office success, they were not well received by critics and many will point to these books and their subsequent adaptations as leaving the horror genre in a bad state.

The Walking Dead would later premiere in 2010 and The Conjuring films would begin in 2013 to major critical and commercial success. As a result, horror films are at the forefront of cinema once again. However, hopes were high in Daybreakers in 2009 at the time of its release, but this would not prove to be the savior of the genre.

It’s hard to imagine actors like Ethan Hawke and Willem Dafoe as overacting or even under acting, but it unfortunately happens with this film. Willem Dafoe’s character carries the nickname of Elvis and at one point begins to sing as Elvis to explain the nature of his second moniker as if no one is familiar with Elvis or his contribution to history. On the podcast episode, Sean and Chris agreed that this was the major Lens Flare of the film – to no one’s surprise.

In addition, Ethan Hawke doesn’t do much to stand out and it’s strange to see an actor of his caliber be so lackadaisical and not give his performance much to desire. Even Sam Neill had potential to stand out in this film, but he becomes a blood swilling villain at the end of the film as he reveals his grand evil plan to Edward.

Many of the plot points seems to go unanswered or they were simply underdeveloped. There are hints of an implied romance with Audrey and Edward as well as an additional romance or at least a close friendship between Audrey and the vampire politician they’ve enlisted to help them. The film also opens with a hyper stylized scene showing a young vampire exposing herself to a sunrise as a form of suicide in lieu of title cards to set up this complex world in the ten years following the vampire pandemic.

The subsiders were under-utilized as well as we’re treated to one scene in the entire film of Edward and his brother dispatching one after it has broken into Ed’s home. These multiple issues led us to speculate that maybe a director’s cut has yet to be released or there’s a multitude of scenes that were not included in the theatrical cut. However, given that it’s been over 10 years since the home media release of the film without any additional releases, it seems unlikely that we’ll get a cut that explains the lack of cohesiveness in the film’s plot.

Our hosts differed slightly in their ratings with Chris rating the film as a WOULD NOT WATCH and Sean rating the film as a WOULD WATCH. For Chris, the grossly underdeveloped story and confusing subplots were detractors for a film that had an interesting premise, but tries way too hard to establish its own lore. For Sean, he enjoyed Ethan Hawke’s performance as well as the over-top-gore, especially during the film’s climax, but the film didn’t mesh overall for him. Maybe do yourself a favor and save this one for a Netflix or Hulu watch when you can’t find anything else to watch.

What did you think of Daybreakers? Did you like any of the acting? Was the gore too much for you? Listen to the full episode to find out Sean and Chris’ choices for Red Shirts and tune in next time as they break down the new Netflix series Space Force starring Steve Carell and John Malkovich!

Please listen, rate and subscribe to the podcast in your podcast app of choice and join us next time!