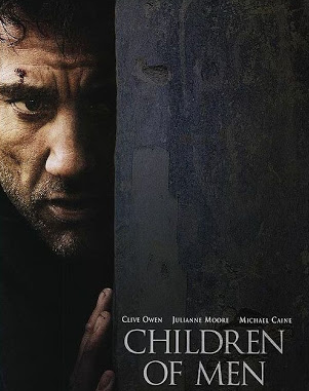 This time, we break down a Children of Men movie review, a dystopian modern classic. With this movie, we discuss how this film takes steadi-cam to a whole new level, we wonder why Great Britain is the only country left standing after global catastrophe, and won’t someone think of the children?! Let’s dig in on Force Fed Sci-Fi!

Children of Men Cast and Crew

Directed by Alfonso Cuaron: Cuaron was beginning to come to the cinematic forefront with his prior film Y Tu Mama Tambien which brought him international acclaim and he was tasked to direct Harry Potter and the Prisoner of Azkaban after the previous film released. His Harry Potter also received worldwide critical acclaim with particular attention to the shift in tone for the series and being able to truly capture the spirit of the novels. He was brought onto Children of Men in 2001 and his time spent in the United Kingdom working on Harry Potter gave him unique insight into British society and culture that helps to flush out the look of Children of Men.

Director of Photography, Emmanuel Lubezki: We tend to overlook cinematography on Force Fed Sci-Fi at times, but Lubezki’s contributions to this film cannot be ignored. To briefly summarize, the cinematographer is responsible for everything you see visually on the movie screen in terms of lighting and focus. While working on Children of Men, Lubezki and Cuaron worked together to develop the revolutionary long takes and camera system used in the film and pioneered techniques that are becoming the standard in Hollywood, but more on that later….

Clive Owen as Theo: The early 2000’s were good to Clive Owen. He was a finalist to take over the role of James Bond which ultimately went to Daniel Craig and while Craig’s contribution to the Bond franchise can’t be overstated, we can’t help but wonder what the Bond films would look like if Owen were cast. At this point in 2006, he had appeared in films like The Bourne Identity, King Arthur, Closer, Sin City and Inside Man. He brought a unique cynicism to the character of Theo. He’s playing a man who’s been beaten down by life and has little to no personal connections following the death of his young son and his subsequent divorce from Julian. Looking back at Owen’s career, Children of Men remains a standout from his great resume.

Julianne Moore as Julian: Apart from her role in Evolution, Moore was easily the most high-profile actress to join the cast when she signed on in June 2005 having appeared in films like The Lost World: Jurassic Park, Boogie Nights, The Hours and Hannibal. She brings an emotional depth in the film as she interacts with Theo while balancing her desires to further the cause of the political group she’s leading. In many ways, she’s the only real virtuous individual in the film as everyone else wants to use Kee’s baby for political gains instead of just treating it as a baby.

Michael Caine as Jasper: Caine’s career has too many credits to list off here (briefly talked about in our first film review episode on Inception), but needless to say, he had achieved legendary status at this point in 2006. In the film, Jasper and his wife are living in isolation in the forest, away from the political strife and tumultuous environment of London. In his prior life, he was a political cartoonist and his wife was a photojournalist; however, it’s implied that she was captured and tortured at the hands of MI5, Britain’s domestic intelligence service, and has left her an invalid and doesn’t speak in the course of the film. The implications here are that journalism is either heavily censored or state run and perhaps they’ve become enemies of the state? Regardless, it’s a brilliant bit of characterization that doesn’t require any lines of dialogue to get across.

Children of Men: Book vs Film

Sean reviewed the Cliff Notes for the novel and by his own admission, Chris skimmed it when he did read it, but while some elements from P.D. James original novel are present in the final film, there are some notable differences between the source material and film. Alfonso Cuaron also had a hand in writing the screenplay and made it a point to not read the book prior to working on the script while only one of the other screenwriters, Timothy J. Sexton, read the book in its entirety. Cuaron would eventually read an abridged version of the novel, but listed below are notable differences:

By all accounts, P.D. James was pleased with the changes made to her novel and has praised Cuaron’s work.

Children of Men Setting: The World We Find Ourselves In

The film itself takes place in the year 2027 and let’s just say a lot has happened to the world we find ourselves. Cuaron doesn’t spend a ton of time on the backstory of what happened, but merely drops us into the story and provides clues via graffiti or news segments regarding the state of the world. For starters, no children have been born
since 2009 and the film opens with the world mourning the death of the world’s youngest person known as “Baby Diego” as Theo swiftly moves among the mourners just to order his coffee, the shop he found himself in only moments ago explodes via a terrorist bomb.

There is the government side of the conflict who is very anti-immigrant with many refugees being shown in cages awaiting deportation or police officers conducting sweeps of slums. As Chris and Sean point out in the podcast episode, it’s very reminiscent of the type of liquidation the Nazis would conduct in ghettos during World War II. The Fishes are the activist group with nefarious plans of their own as Luke, second-in-command behind Julian, who orchestrates her assassination so he can maneuver into leadership and use Kee’s baby for political reasons. Everyone seems to be glossing over the fact that this is a human child that they’re hoping to use for political gain.

This is very much a world of have’s and have not’s as the most opulent scene in the film can be found when Theo is visiting his cousin Nigel to obtain some travel visas and we see a recreation of the famous painting “A Sunday Afternoon on the Island of La Grande Jatte” as we see families congregating together while the Buckingham Palace guard parade are in full dress uniforms and even zoo animals are treated to afternoon tea. Meanwhile, the less fortunate individuals are left to toil and suffer for their wares.

We also see numerous environmental concerns as early on in the film, we find a herd of cows that have been burnt in a field and that’s about the extent of the animals we see in the film with the exception of a few dogs and cats. The next scene containing any group of animals is that showing industrial runoff that has become a deadly feast to any
poor creature that finds it hoping for a drink. We see a world that is no longer concerned with preserving it since there is not a future generation to take care of it. As Alfonso Cuaron notes, the ending of the film depends on if you’re an optimist or a pessimist. As the sounds of children playing over the credits, maybe Kee’s baby really did save the
world or was it simply too late for humanity? Either way, it makes for great conversation.

Children of Men Cinematography: The Use of Long Takes

As mentioned earlier, Cuaron and cinematographer Emmanuel Lubezki collaborated on a groundbreaking new way to capture the action on-screen. You may notice that several scenes appear to be longer than usual and this is due to clever camera work, subtle editing and the use of computer effects. The most notable of these scenes are the ambush in the forest when Julian is killed, when Theo, Miriam and Kee are escaping from the farm, and the battle in Bexhill when Theo is moving through the streets while dodging gunfire and explosions. An experienced movie goer may be trained enough to spot the cuts in these sequences, but the camera movement is flawless and the edits are hardly noticeable. This has now become a preferred method for filmmakers and we’re now beginning to see the influence Children of Men has had on films like Birdman and 1917 (which we talked about in our recent Oscar’s So Force Fed episode) and other filmmakers like Quentin Tarantino have been using long takes for decades, but never has used single camera long takes for his scenes.

While Chris and Sean agreed with their rating of Would Host a Viewing Party, producer Jeremy differed slightly in his rating as he rated the film a Would Watch citing the subject matter of the film and the fact that is emotionally heavy and can be hard to watch at times. Sean cited that the wide variety of emotions he experienced that he admired about the film (he laughed, he cried!) while Chris did remark on the emotional heaviness of the film, he does believe that it is a film that everyone should see at least once and it seems eerily prescient of our current times.

What did you think of Children of Men? Did you find it to be emotionally heavy? Do you agree with our Lens Flares? Tune in to the episode to find out these as well as our choices for Red Shirts and maybe a Yellow Shirt? As always, please listen, rate and subscribe wherever you find podcasts and tune in next time as we hunker down to review the French neo-noir thriller Alphaville!